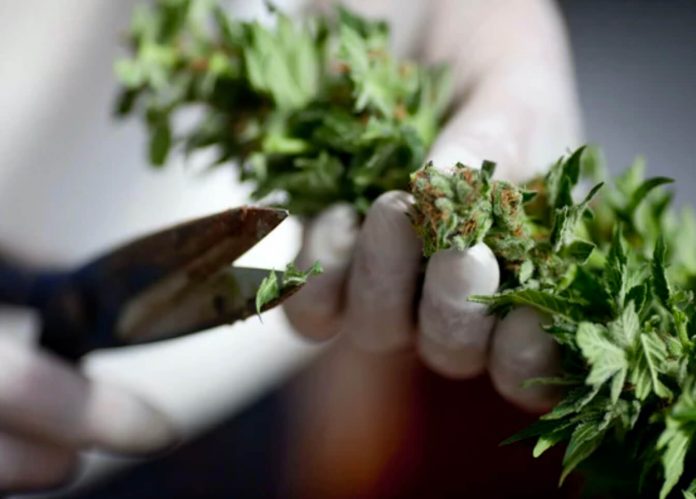 Why Smoking Weed Makes You Tired And Lazy

Even as the body of evidence of cannabis’ potential as a potent medical precursor grows (especially with the development of CBD-rich strains), smoking it is not without long-term side effects. And we’re not just talking about munchie-induced weight gain either. A number of recently published studies suggest habitually getting high not only kills your motivation, it might even alter your brain chemistry. Specifically, the part that makes you want to get off the couch.

For all of its benefits, the mounting evidence suggests that THC’s effects on your dopamine levels might not just make you lazy. It could cause some more serious medical issues as well. So what exactly is going on here?

Dopamine is a simple organic chemical used as a neurotransmitter that performs a variety of important functions within and without the brain, including motor control, learning, immune response, kidney and pancreatic function. The chemical is transmitted along specialised Dopaminergic neurons throughout the brain and, while there are not more than 400,000 total such neurons (a minuscule portion of the 100 billion or so in the human brain), their effects are wide ranging and intense.

These cells are concentrated primarily in the substantia nigra, a part of the basal ganglia located in the midbrain, and the ventral tegmental area (VTA), also in the midbrain. These neurons spread out from the substantia nigra into the striatum, globus pallidus, and subthalamic nucleus, which all play important roles in motor control — the highest forms being motivation and decision-making while lower forms include sexual arousal, nausea, and lactose production — and response selection. From the VTA these neurons fan out into the nucleus accumbens and prefrontal cortex, both of which regulate motivation response and reward.

A number of diseases are thought to be the result of altered dopamine levels. Restless Leg Syndrome, and ADHD have all been linked to low dopamine levels, while elevated levels are routine for schizophrenics. Researchers believe that the substantia nigra, in particular, plays a role in the onset of Parkinson’s syndrome — when these few cells die off, the amounts of dopamine vs acetylcholine are thrown out of balance and the disease is more likely to take hold.

How It Works In Your Brain

“Our understanding of dopamine has gone through several reiterations,” says Michael Treadway, PhD, a clinical fellow at McLean Hospital and Harvard Medical School. Dopamine “works” by binding to a neuron’s surface receptors (specifically G protein-coupled receptors), causing either the excitation or inhibition of the target cell via an opening of sodium or potassium channels, respectively. Science hasn’t yet tacked down the complete functional capabilities of the body’s numerous dopamine systems but do understand a large part of its role in reward-motivated behaviour and response selection. Basically, the more dopamine released in response to a certain action — say, sex, cocaine, or even the unassuming “runner’s high” — the more likely you are to perform that action again.

Dopamine effectively regulates your “effort threshold,” the likelihood that you’ll perform an action after weighing the required costs and potential benefits. If you have more dopamine in your system, you’re more likely to undertake an action than if you had less dopamine coursing through your head.

Not only that, dopamine acts as a potent teaching device, training the basal ganglia to evoke whatever action elicited the dopamine release rather than another action that does not. Again the more dopamine your body releases, the more likely you are to do what ever released it. As such, elevated dopamine levels have been linked to increased motor activity and impulsive behaviour (as evidenced here) while low levels of the neurotransmitter leaves people lethargic, depressed, and unmotivated.

For example, Dr Treadway and his team from Vanderbilt University studied the effects of naturally occurring dopamine levels on the decisions made by 25 volunteers, ages 19 to 29. The volunteers were given a series of tasks with a variety of associated dollar amounts. Easy tasks, such as pushing a button 7 times in 30 seconds with your dominant index finger paid out less than tougher tasks like pressing said button 100 times in 21 seconds with your off-hand pinkie. And while the subjects were button-mashing, Treadway’s team was monitoring their brain activity using positron emission tomography (PET) scans.

The results, published in the Journal of Neuroscience, found that people who undertook and completed a higher proportion of hard vs easy tasks over the course of the 20-minute test also had higher levels of dopamine in the striatum and ventromedial prefrontal cortex (regions associated with reward and motivation), while those subjects that performed proportionally fewer hard tasks had higher levels of dopamine in a brain region called the insula.

How It Interacts with THC

According to a newly published study from teams at Imperial College London, University College London (UCL), and King’s College London, long-term habitual use of marijuana can lead to severe dopaminergic dysfunction. Specifically, the study found that the bodies of weekly, heavy tokers — those with borderline cannabis dependence — produce far less dopamine than those of non-users or social smokers. What’s more, the dopamine heavy users did produce rarely made it into the brain’s striatum region, leading to decreased motivation levels.

The teams performed PET scans on the striatum of 19 regular cannabis users and 19 non-users, matched for age and sex. The smokers had all started using cannabis between the ages of 12 and 18, all admitted to having psychotic-like symptoms while under the influence at one point or another (i.e.: paranoia, altered mindset, etc).

The team had expected to see elevated dopamine levels among the stoners but found the opposite: the earlier they started smoking and more frequently/heavily they smoked, the lower their baseline dopamine levels compared to the control group.

“Long-term regular marijuana use seems to have a [strong] effect on brain chemistry,” says Michael Bloomfield, Ph.D., lead author of the study said in a press release. “After a period of time, your brain cells aren’t able to make as much tyrosine hydroxylase, an important enzyme that’s a key component in making dopamine. We know that dopamine affects how the brain controls motivation and addictions; therefore our study provides a scientific explanation as to the reason that cannabis users seem to become less motivated.”

It has been assumed that cannabis increases the risk of schizophrenia by inducing the same effects on the dopamine system that we see in schizophrenia, but this hasn’t been studied in active cannabis users until now. The results weren’t what we expected, but they tie in with previous research on addiction, which has found that substance abusers — people who are dependent on cocaine or amphetamine, for example — have altered dopamine systems.

This study did only focus on users that reported psychotic effects while high, but is confident that the findings can be extrapolated out to the wider understanding of addiction and mental illness in general.

What It All Means

How To Grow Your Own Out Of This World Cannabis Bonsai Tree Growers have experimented with creating cannabis bonsai, primarily to produce clone clippings from...
Read more