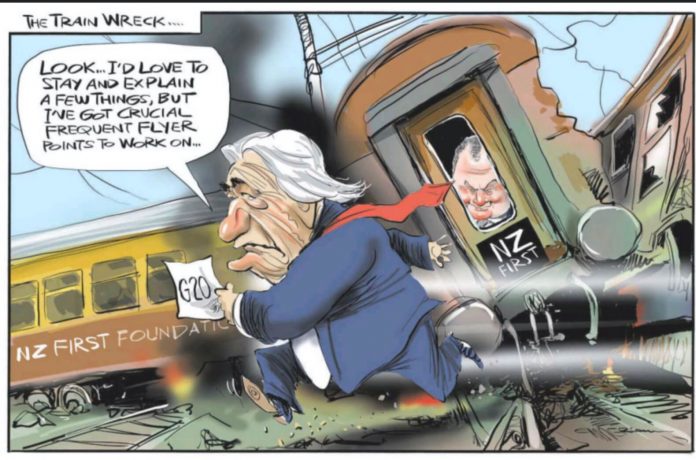 Deputy Prime Minister Winston Peters has lost his privacy court action against top government officials, the Ministry of Social Development and two former National ministers – with the Chief High Court Judge dismissing all his claims for declarations and damages.

Justice Geoffrey Venning said: “Mr Peters’ claim against all defendants fails as he is not able to establish that they were responsible for the disclosure of the [superannuation] payment irregularity to the media.”

While the judge said the information was deliberately leaked and that leak would have been considered offensive by a reasonable person, he found both the key officials had a proper purpose in passing the information to ministers and the two ministers had a genuine interest in knowing it.

Had Peters been able to identify the leaker, the judge considered he might have qualified for between $75,000 and $100,000 in damages.

But his claim the details of his overpayment had been passed by officials to ministers simply as “salacious gossip” was firmly rejected by the judge. “That allegation should not have been made.”

Justice Venning added: “The allegation that the disclosure had no purpose but to disclose the payment irregularity to a political opponent is also not made out.”

Peters, a one-time lawyer, had attempted to show negligence and bad faith by officials in telling their National government ministers of his overpayment of superannuation before the 2017 election, and he alleged a political conspiracy to damage him and New Zealand First at the polls.

The case, for which the taxpayer paid substantial legal costs incurred by the two National ministers, Anne Tolley and Paula Bennett, plus Hughes, the former chief executive of the MSD, Brendan Boyle and its officials, centred on the pre-election leak of the fact Peters had been overpaid national superannuation for seven years – and secretly paid back $18,000 when it was found out.

Peters quietly filed court action against National ministers and officials the day before the general election, then went on to negotiate with both National and Labour in ‘good faith’ in its aftermath.

He later narrowed that to sue the top officials, MSD and the two ministers, seeking $450,000 for breach of his privacy and alleging a political conspiracy to damage him.

Peters claimed he was guided in finalising his original superannuation application form by an MSD official, and argued he had completed it correctly when he did not say he was in a de facto relationship with partner Jan Trotman.

His evidence was countered in detail by MSD staff from an office Peters went to, well away from his own home, to apply for superannuation. He claimed – and Trotman repeated – that she had gone with him when he applied and could vouch for his story but all the officials said she had not been with him and they would have remembered if Trotman was there. They said he had not ticked the box he needed to tick on the form and in so doing had understandably led officials to believe he qualified for the single superannuation rate.

Justice Venning’s judgment, released Monday evening, found the form, the MSD officer and Peters all shared some responsibility for the wrong payment to Peters.  It also accepted Trotman and Peters’ evidence that she had been at the office with him. “Ms Trotman impressed as a straightforward witness.”

Peters had made his overpayment public during the general election campaign after learning the information had been provided to journalists. Newshub and Newsroom both received anonymous calls with details about the overpayment, which had come to light when Peters’ longstanding partner Trotman applied for her own superannuation.

At the High Court hearing, Newstalk ZB political editor Barry Soper was called by Peters as an expert witness and claimed the leak to journalists was part of a political attack, implying it came most likely from the National Party.

“It does not satisfy the requirement for admissibility as expert opinion evidence. Even if it was generally correct that the disclosure was politically motivated, it may not have been disclosed, for example, by a National Party member or supporter.  It could also have been disclosed by a Green Party supporter aggrieved at the public backlash against [former Greens leader Metiria] Turei following her disclosure of fraud.”

The two ministers were briefed on the matter by the top public servants under the ‘no surprises’ policy by which departments inform ministers of matters which might become controversial or be subject of public debate. The officials had sought advice from the Solicitor-General before acting and had waited until a decision had been reached independently on Peters’ fate by an MSD regional official.

( It emerged at last November’s High Court hearing that Peters, who is number two in the coalition Government, and the State Services Commissioner, Peter Hughes, had not spoken since the leak.)

As well as around 40 ministry officials who had some awareness – 11 of whom knew the level of detail passed to the media – several officials in Tolley’s ministerial office and also then-Prime Minister Bill English and finance minister Steven Joyce ended up being told directly or indirectly some information by the two ministers.

Peters argued a legal principle of res ipsa loquitur, or the facts speak for themselves, to allege that because the top officials and National ministers had been told the information it was obvious the leak must have come from those channels.

However Justice Venning found:  “While it is possible the disclosure was politically motivated, it could have been made by members of either of the other major parties, (at that time neither of them knew who Mr Peters and NZ First might support) or even a disaffected NZ First supporter disappointed in a perceived failing by Mr Peters.  Further, a supporter of the Green Party or of Ms Turei who considered she had been treated harshly by the media could have been the source of disclosure to the media.

“That is the fundamental difficulty for Mr Peters’ reliance on res ipsa loquitur.  The doctrine is not applicable where the plaintiff cannot identify the defendant.”

The judgment found it was possible Hughes and Boyle could have given their ‘no surprises’ briefings to their ministers without naming Peters except for the fact of the existing controversy of Turei.

“In those circumstances, I accept the disclosure of Mr Peters’ identity became relevant given the timing of her disclosure, the public debate about it and Mr Peters’ position as leader of another party in Parliament.”

In ruling out awarding damages, the judge made one key finding that Peters could well seize on to back his position:

“In the circumstances, if Mr Peters could have identified who disclosed his private information to the media then damages in the region of $75,000 to $100,000 in total might have been appropriate. This was a deliberate breach of his privacy with the intention of publicly embarrassing him and causing him harm.”

The lawyer for Tolley and Bennett, Bruce Gray QC, told the court in November the case had been brought by Peters under the tort of privacy but that required the information released about him to be highly sensitive and to have caused him harm. Neither element had been proven in evidence. Peters could have taken a separate action under the Privacy Act where he would not have needed to identify a person who leaked his information, but clearly he wanted to blame someone and to punish them publicly.

The Crown’s lawyer, Victoria Casey QC, had said the NZ First leader’s evidence was like ‘The Case of the Dog that Didn’t Bark’. He had made sweeping allegations against the officials but had not backed them up in court.

Previous articleGoebels would be proud
Next articleHave Your Say

Thanks for posting the link Viking. From the Voices For Freedom website https://voicesforfreedom.co.nz/blog/post/position-statement-government-doesnt-want-you-see On Friday the Ministry of Health (MoH) published a new guidance document on its...
Read more
NZ Politics

Shows you how far down the road to communism we are. Count off the steps as you listen. This pandemic response has nothing to do...
Read more
NZ Politics