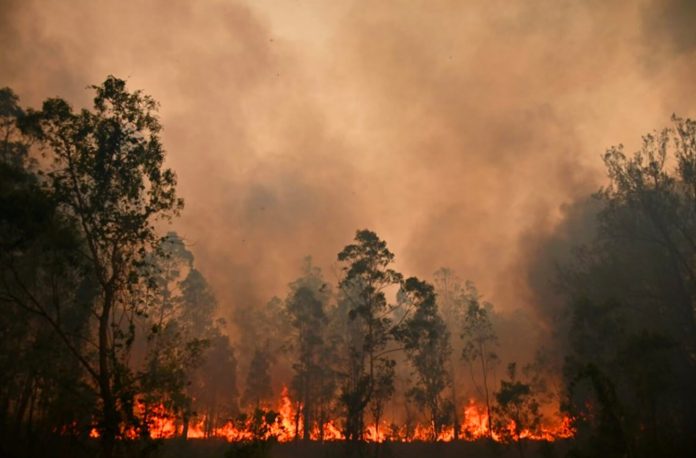 Sarah Basford
Despite a recent deluge on Australia’s east coast, which put out many of the raging fires persisting from late 2019, their impact on the environment continues to linger. A new report shows the sheer scale of the amount of carbon emissions the fires released into the atmosphere.

The bushfires that raged through Australia emitted 409,700,000 tonnes, or 409.7 megatonnes, of carbon dioxide into the atmosphere, according to Bloomberg News. The figures are from the Copernicus Atmosphere Monitoring Service (CAMS), which has been monitoring the fires and the transport of the pollutants it released since September 2019.

It means the Australian fires have earned the undesirable spot of being number one in carbon emissions output generated by fires in 2019. It surpassed the Arctic fires, which released 182 megatonnes and burned Siberia, the Amazon fires, which are estimated to have released 392 megatonnes, and Indonesia’s fires, which emitted 360 megatonnes.

The worst day in particular was 2 January 2020 when CAMS observed the highest concentrations of atmospheric carbon monoxide over the South Pacific Ocean, which had come from NSW’s fires.

Rebecca Buchholz from the U.S.’s National Centre for Atmospheric Research told Bloomberg fire-generated carbon emissions are usually reabsorbed by plant regrowth during the habitat’s recovery but given the scale of the output, it might be enough to put the cycle out of balance.

On January 8, Copernicus Climate Change Service (C3S) declared 2019 was the second hottest year on record with only 2016 beating it by 0.04°C. It also found the average temperature of the last five years was “between 1.1 and 1.2°C higher than the pre-industrial level defined by the IPCC [Intergovernmental Panel on Climate Change].”

In October 2018, the IPCC released a monumental report outlining the world’s urgent need to reduce carbon emissions in order to limit global temperature levels to 1.5 degrees Celsius above pre-industrial levels. It warned if temperatures continued to increase due to the rise in atmospheric carbon emissions, the world would face the serious consequences of extreme weather events, which would compound and impact access to resources, ecosystems, biodiversity, food security and tourism.

Previous articleHave Your Say
Next articleReality Check: There Is No Political Solution to Income Inequality