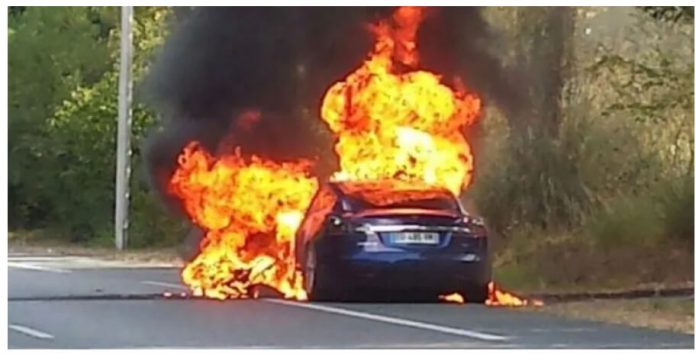 Electric Vehicle Fires: It Is Not A Matter Of If, But When

Joe Biden’s plan to convert 50 percent of the U.S. vehicle fleet from internal combustion engines to electricity by 2050 to fight climate change ignores a serious danger in doing so.

Recent events around the world reveal that fire catastrophes from electric vehicles (EVs) are not only possible, but increasingly likely. The fire risk of the lithium-ion batteries that these EVs rely on for power is well documented, as they have been known to spontaneously combust in the most inopportune times and places.

Just this week, General Motors announced a second recall of Chevrolet Bolt EVs and EUVs manufactured from 2019 to 2021 model years in order to fix a defect in two of the lithium-ion battery modules that have led to fires. This follows on the heels of a previous recall of 69,000 older vehicles that will replace all five of the battery modules.

The GM announcement is just the latest in a string of recalls by EV manufacturers to attempt to fix defects that can lead to catastrophic fires related to lithium-ion batteries. Last year, Ford was forced to recall 20,000 hybrids, and soon thereafter, BMW recalled 26,700 vehicles due to battery defects that could lead to fires.

Internal combustion engine vehicles can also catch fire, but those tend to be during accidents or while driving, not sitting passively in a home or parking garage, as can occur with EVs. In addition, fire crews can extinguish gasoline or diesel-powered vehicle fire, but not so for EVs. EV fires are nearly impossible to extinguish with water and need to normally be allowed to just burn out, which may take many hours.

Last year, a California couple awoke to a blaring car alarm and a burning house. The blaze had started in one of the two Tesla S vehicles in their garage and spread to the other. “If we had lived upstairs in this house, we’d be dead,” said Yogi Vindum, a retired mechanical engineer. According to Mr. Vindum, “Gasoline driven cars don’t catch fire in the garage when they’re sitting there. And that’s the difference,” he said. 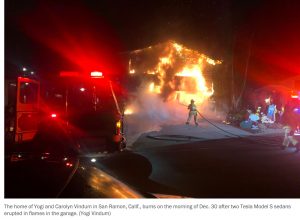 The culprit in nearly all EV fire cases is the lithium-ion batteries that power them, and which burn with extraordinary ferocity. Adding to the fire and heat danger posed by these events is the extreme toxicity of the fumes generated. According to one study, these fumes may in some circumstances be a larger threat, especially in confined environments where people are present

Battery fires are not limited to passenger cars. A fire at a bus depot housing electric vehicles in Hanover, Germany, caused millions of euros in damage. Five e-buses and four other vehicles were destroyed, along with the building and charging station. In China four electric buses went up in flames after one had ignited.

Large lithium batteries used as backup power supplies to wind turbines and solar panels have combusted as well. Fire crews took more than three days to extinguish a blaze at the 13-ton Tesla Big Battery in Victoria, Australia. Because ordinary fire suppression methods could not be used on the 300-megawatt power source, crews had to let the blaze burn itself out as authorities monitored air quality in the vicinity. 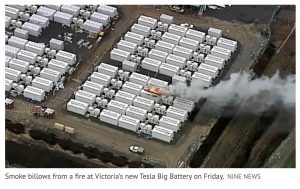 A true nightmare scenario is one in which an EV fire occurs in an underground parking garage beneath an apartment complex or a crowded office building. With the toxic fumes generated, how would the local fire department be able to respond to a fire that could not be extinguished even if they could get to it?

We should be forward-thinking in the prevention of a looming tragedy and consider doing what two towns in Bavaria did after the horrific German bus station inferno: completely ban all-electric vehicles from parking in underground garages. Electric vehicles may one day be safe enough to assume no fire risk in vulnerable garages, but that day has yet to arrive.