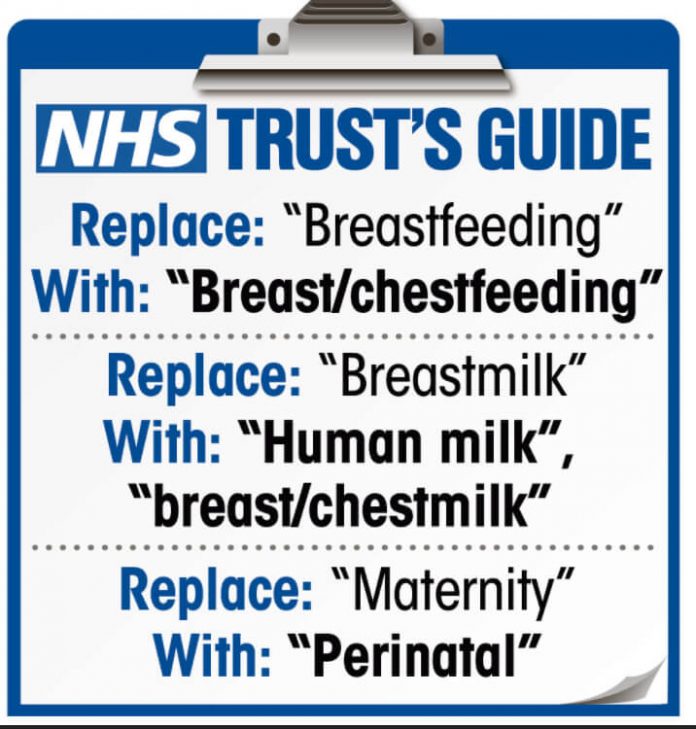 Staff at Brighton and Sussex University Hospitals NHS Trust have been told to say “chestfeeding” instead of “breastfeeding” and to substitute the term “mother” with “mother or birthing parent” as part of moves to be more trans-friendly.

Midwives have also been instructed that breastmilk should be replaced with the phrases “human milk”, “breast/chestmilk” or “milk from the feeding mother or parent”.

The hospital is the first in the country to formally implement a gender inclusive language policy for its maternity services department which will now be known as “perinatal services”.

The Mirror reports: Other changes include replacing the use of the word “woman” with the phrase “woman or person”, and the term “father” with “parent”, “co-parent” or “second biological parent”, depending on the circumstances.

A policy document released this week, said staff should not stop using the word “woman” or other terms describing motherhood but they should consciously start adding in the word “people” and other more inclusive language.

It said: “Gender identity can be a source of oppression and health inequality. We are consciously using the words ‘women’ and ‘people’ together to make it clear that we are committed to working on addressing health inequalities for all those who use our services.

“As midwives and birth workers, we focus on improving access and health outcomes for marginalised and disadvantaged groups.

“Women are frequently disadvantaged in healthcare, as are trans and non-binary people… By continuing to use the term ‘woman’ we commit to working on addressing health inequalities for all who use our services.

“We also recognise that there is currently biological essentialism and transphobia present within elements of mainstream birth narratives and discourse.

“We strive to protect our trans and non-binary service users and healthcare professionals from additional persecution as a consequence of terminology changes, recognising the significant impact this can have on psychological and emotional wellbeing.

“Acknowledging the cultural context in which service development occurs is vital in making trans and non-binary lives safer.”

In a statement released on Twitter, BSUH Maternity services said: “We want everybody who uses our services to see themselves reflected in the language that we use. This means not only pregnant women, but also pregnant trans, non-binary and agender people.

“Our chosen approach to inclusive language is additive rather than neutral.”

The language changes will be implemented in the trust’s webpages, leaflets and communications such as letters and emails.

Staff will be asked to use language which reflects people’s “own identities and preferences” when talking to patients.