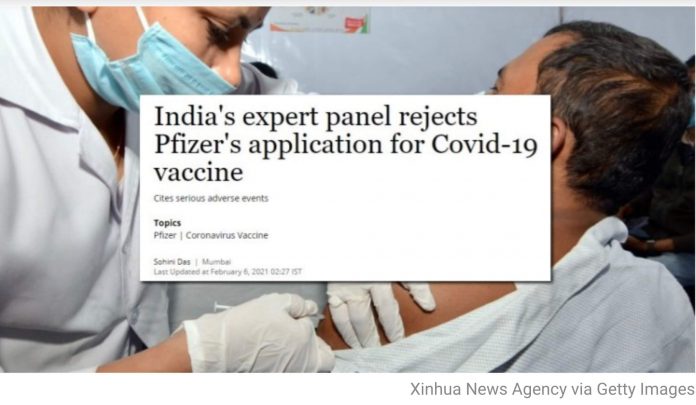 Newsweek published a “fact check” which labeled claims that India had banned the Pfizer-BioNTech vaccine as “mostly false” despite admitting in the article that India has in fact temporarily banned the vaccine.

Last week, discussion around the issue intensified after it was revealed that Indian health authorities had refused to give permission for the vaccine to be distributed.

“On February 3, 2021, India’s Subject Expert Committee (SEC), a panel that advises the nation’s Central Drugs Standard Control Organisation (CDSCO), a national regulatory body focused on pharmaceuticals and devices, ruled that the Pfizer-BioNTech vaccine should not be recommended for an EUA in the country “at this stage,” reports Newsweek.

The report quotes India’s Subject Expert Committee (SEC), which ruled, “The committee noted that incidents of palsy, anaphylaxis and other SAE’s have been reported during post marketing and the causality of the events with the vaccine is being investigated. Further, the firm has not proposed any plan to generate safety and immunogenicity data in Indian population.”

In response, after the meeting with the regulator, Pfizer Inc. withdrew its application for the vaccine’s use in India….”

Previous articleFresh Protein Anyone?
Next articleHave Your Say