You Stupid Boy
Home Chinese Virus Fight the Pandemic, Save the Economy

Fight the Pandemic, Save the Economy 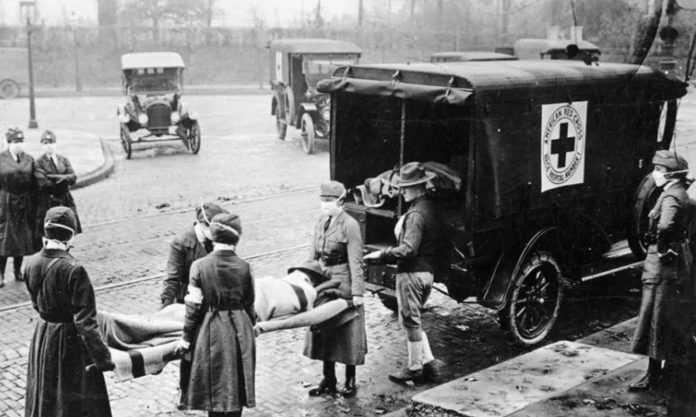 Fight the Pandemic, Save the Economy: Lessons from the 1918 Flu

The COVID-19 outbreak has sparked urgent questions about the impact of pandemics, and associated countermeasures, on the real economy. Policymakers are in uncharted territory, with little guidance on what the expected economic fallout will be and how the crisis should be managed. In this blog post, we use insights from a recent research paper to discuss two sets of questions. First, what are the real economic effects of a pandemic — and are these effects temporary or persistent? Second, how does the local public health response affect the economic severity of the pandemic? In particular, do non-pharmaceutical interventions (NPIs) such as social distancing have economic costs, or do policies that slow the spread of the pandemic also reduce its economic severity?

In our paper, we study the economic effects of the largest influenza pandemic in U.S. history, the 1918 Flu Pandemic which lasted from January 1918 to December 1920, and spread worldwide. It is estimated that about 500 million people, or one-third of the world’s population, became infected with the virus, leading to at least 50 million deaths worldwide, with 550,000-675,000 occurring in the United States. The pandemic thus killed about 0.66 percent of the U.S. population, and, in particular, resulted in high death rates for young (18-44) and healthy adults.In our research, we exploit variation in both the severity of the pandemic, as well as the speed and duration of NPIs implemented to fight disease transmission across U.S. states and cities. NPIs implemented in 1918 resemble many of the policies used to reduce the spread of COVID-19, including closures of schools, theaters, and churches, bans on public gatherings and funerals, quarantines of suspected cases, and restrictions on business hours.Our paper yields two main insights. First, we find that areas that were more severely affected by the 1918 Flu Pandemic saw a sharp and persistent decline in real economic activity. Second, we find that cities that implemented early and extensive NPIs suffered no adverse economic effects over the medium term. On the contrary, cities that intervened earlier and more aggressively experienced a relative increase in real economic activity after the pandemic subsided. Altogether, our findings suggest that pandemics can have substantial economic costs, and NPIs can lead to both better economic outcomes and lower mortality rates.Our two main findings are summarized in the chart below, which shows the city-level correlation between 1918 flu mortality and the growth in manufacturing employment from 1914 to 1919 (two census years). As the chart reveals, higher mortality during the 1918 flu is associated with lower economic growth. The chart further splits cities into two groups: those with NPIs in place for longer (blue dots) and shorter periods of time (red dots). Cities that implemented NPIs for longer tend to be clustered in the upper-left region (low mortality, high growth), while cities with shorter NPI periods are clustered in the lower-right region (high mortality, low growth). This suggests that NPIs play a role in attenuating mortality, but without reducing economic activity. If anything, cities with longer NPIs grow faster in the medium term.

With respect to the economic effects of the pandemic, we find that more severely affected areas experienced a relative decline in manufacturing employment, manufacturing output, bank assets, and durable goods consumption. Our regression estimates imply that the 1918 Flu Pandemic led to an 18 percent reduction in manufacturing output for a state at the mean level of exposure. Exposed areas also saw a rise in bank charge-offs, reflecting an increase in business and household defaults. These patterns are consistent with the notion that pandemics depress economic activity through reductions in both supply and demand (Eichenbaum et al. 2020). Importantly, the declines in all outcomes were persistent, and more affected areas remained depressed relative to less exposed areas from 1919 through 1923.The main concern with our empirical approach is that areas with higher exposure to the 1918 Flu Pandemic may simultaneously be more exposed to other economic shocks. However, although the outbreak was more severe in the eastern United States, previous studies argue that the geographic spread of the pandemic was somewhat arbitrary (Brainerd and Siegler 2003). Consistent with this, we find that severely and moderately affected areas had similar levels of population, employment, and income per capita before 1918. We also find that the results are robust when controlling for time-varying shocks that interact with a variety of local economic characteristics, including states’ sectoral employment composition. The effects are also similar when exploiting both city- and state-level variation in influenza exposure. Further, the results are similar when using 1917 influenza mortality as an instrument for 1918 mortality. This exercise utilizes variation in the 1918 flu driven by local predisposition to influenza outbreaks due to climate, immunological, and socioeconomic factors, which in ordinary years would not cause economic disruption.

Due to the lack of higher frequency data, we cannot pinpoint the exact dynamics and mechanism through which NPIs mitigate the adverse economic consequences of a pandemic. However, the patterns we identify in the data suggest that timely and aggressive NPIs can limit the most disruptive economic effects of an influenza pandemic. The epidemiology literature finds that early public health interventions reduce peak mortality rates — flattening the curve — and lower cumulative mortality rates (Markel et al. 2007, Bootsmaa et al. 2007). Because pandemics are highly disruptive to the local economy, these efforts can mitigate the abrupt disruptions to economic activity that result from such shocks. As a result, the swift implementation of NPIs can also contribute to “flattening the economic curve,” reinforcing the effects of more traditional economic policy interventions (Gourinchas 2020).Anecdotal evidence suggests that our results have parallels in the COVID-19 outbreak. Governments that implemented NPIs swiftly, such as those in Taiwan and Singapore, have not only limited infection growth; they also appear to have mitigated the worst economic disruption caused by the pandemic. For example, economist Danny Quah notes that Singapore’s management of COVID-19 has avoided major disruptions to economic activity without leading to a sharp increase in infections through the use of forceful, early interventions. Therefore, well-calibrated, early, and forceful NPIs should not be seen as having major economic costs in a pandemic.Altogether, our evidence implies that it’s the pandemic and the associated spike in mortality that constitute the shock to the economy. To the extent that NPIs are a means to attack the root of the problem, mortality, they can also save the economy.Consistent with this empirical evidence, the large economic disruption caused by the pandemic is also evident in narrative accounts from contemporaneous newspapers. For instance, on October 24, 1918, the Wall Street Journal wrote:

In some parts of the country [the pandemic] has caused a decrease in production of approximately 50 percent and almost everywhere it has occasioned more or less falling off. The loss of trade which the retail merchants throughout the country have met with has been very large. The impairment of efficiency has also been noticeable. There never has been in this country, so the experts say, so complete domination by an epidemic as has been the case with this one.

Our second set of results center on the local economic impact of public NPIs. In theory, the economic effects of NPIs could be both positive and negative. All else equal, NPIs constrain social interactions and thus dampen any economic activity that relies on such interactions. However, in a pandemic, economic activity is also reduced in the absence of such measures, as households reduce consumption and supply less labor in order to reduce their risk of becoming infected. Thus, while NPIs lower economic activity, they can solve the coordination problems associated with fighting disease transmission and mitigate pandemic-related economic disruption.Comparing cities by the speed and aggressiveness of NPIs, we find that early and forceful NPIs did not worsen the economic downturn. On the contrary, cities that intervened earlier and more aggressively experienced a relative increase in manufacturing employment, manufacturing output, and bank assets in 1919, after the end of the pandemic.Our regression estimates suggest that the effects were economically sizable. Reacting ten days earlier to the arrival of the pandemic in a given city increased manufacturing employment by around 5 percent in the post-pandemic period. Likewise, implementing NPIs for an additional fifty days increased manufacturing employment by 6.5 percent after the pandemic.Our findings are subject to the concern that policy responses are endogenous and may be driven by factors that are related to future economic outcomes, such as the baseline exposure of cities to flu-related mortality, as well as differences in the quality of local institutions and healthcare. This concern is somewhat mitigated by an insight from the epidemiology literature: cities that were hit by later waves of the pandemic — that is, those farther west — appear to have implemented NPIs faster, having learned from the experiences of other cities (Hatchett et al. 2007). Thus, as the flu moved from east to west, cities were much faster to implement NPIs. The map below shows the intensity of local NPIs for the cities in our sample, with cities in the west clearly responding to the arrival of the pandemic with tighter NPIs. Importantly, we also show that our results are robust when controlling for time-varying shocks that are correlated with the differing characteristics of western and eastern cities, such as exposure to agricultural shocks.

Previous articleMovie to see
Next articleHave Your Say