You Stupid Boy
Home Chinese Virus “FIRST DO NO HARM”

“FIRST DO NO HARM” 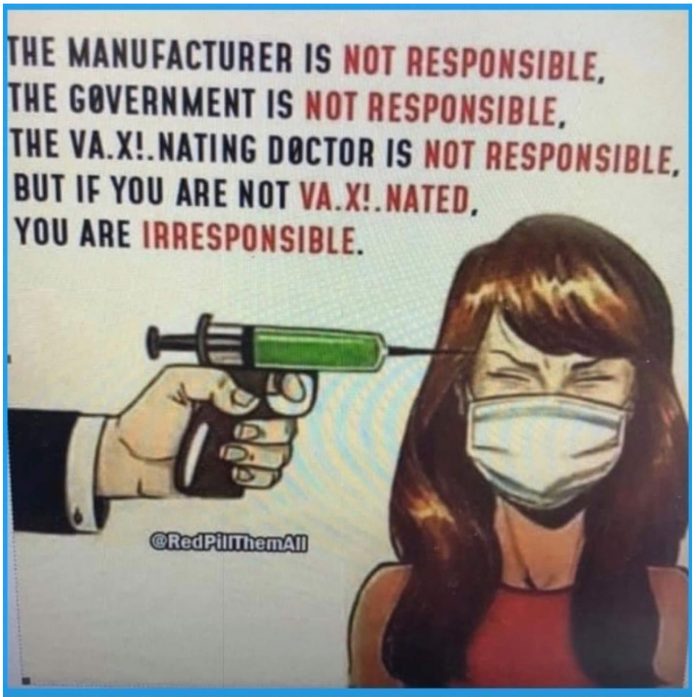 “TRANSPARENCY IS A KEY GUIDING PRINCIPLE OF THE AGENCY”—EUROPEAN MEDICINES (CLEARLY NOT AUSSIE, BRIT, OR YANK)

There are only 27 European nations that participate in EudraVigiliance reporting of deaths and injuries from this non-vaccine, ‘vaccine’ so we can rest assured reality is far, far worse.

So far, Big Pharma hasn’t been able to put EudraVigilance in bondage as they have death reports ‘Down Under’, ‘Over There’ and ‘Jolly Old’—all bought and paid for whores of the highest bidder—even when death or serious injury is a likely outcome for the citizens subjected to their concoction.

Oh!  And did I mention this involuntary stabbing of such a poisonous brew into unwilling arms is an international crime (Nuremberg Code)?

SO NOW THAT VAX DANGER IS CONFIRMED—U.S., BRIT AND AUSSIE LEADERS MANDATE IT? WTF!

The incredibly corrupt Food and Drug Administration (FDA) of my home nation announced over the weekend that it intends to give full approval to this experimental, untested, non-vaccine which is killing and maiming so many—so it can begin a ‘mandatory’ push to make Pfizer great again. 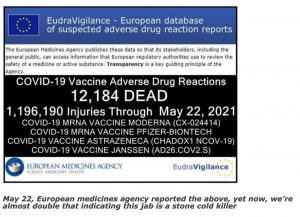 No honest or decent person—which unfortunately eliminates the leadership of most Anglo-Heritage nations at present—could in good conscience mandate an experimental treatment that is killing tens of thousands for but one (or both) of two reason—money and power.

A recent CDC whistleblower provided documents that the real number of “deaths-by-vaccine” in America is in excess of 45,000, yet Sleepy Joe’s creepy Globalist thugs like CCP-compromised Jake Sullivan and Ron Klain work overtime to break the law.

They are forcing government employees, airline workers, and even the military to take the debilitating and deadly jab for Pfizer’s bottom-line, and unlawful authority over the citizenry.

Sleepy Joe and his consort VP (Harris) know that Pfizer excels in providing both money (and power) to its many puppets in our governments, spreading profits the likes of which were never seen before. 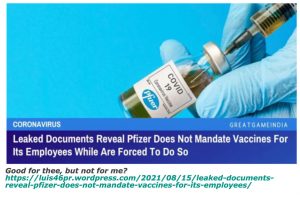 And if any political ‘family’ has proven its willingness to sell out its nation and people for cash, it’s the Biden gang—China, Ukraine, Iraq, Russia just to name a few.

He’s now handing Afghanistan’s rare earth mines to the CCP (estimated to be of $1 trillion in value) along with $83 billion in U.S. military hardware to defend them—which will no doubt be another windfall for him and his son, Hunter.

SO HOW CAN WE STOP THIS DEADLY TRAINWRECK?

Just remember that if the disease were as deadly as they tried to tell us and the ‘jabs’ were safe and effective, they wouldn’t have to force them on anyone. There would be a queue.

Something else is up—and you can be sure that it is not good for ‘us’.

I’m not ‘anti-vax’ I’m just anti-stupid and this thing is far from ready for prime time.