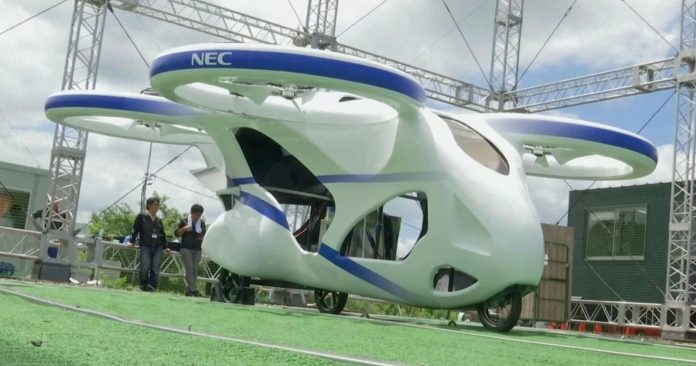 Japan May Have Flying Cars In Three Years

Popularised most memorably by an air-borne DeLorean in Back to the Future 2, the vision of flying cars has been a persistent science fiction trope for many decades. However, the technological challenges and complications of social implementation have largely rendered the idea a no-go.

A Japanese tech startup, the Tokyo-based company SkyDrive, now says it plans to launch the first commercial flying taxi service by 2023. The company’s CEO Tomohiro Fukuzawa goes further and even predicts that by the 2040s, there will be a trillion-dollar global market for electric vertical take-off and landing aircraft (eVTOL).

According to Rajeev Lalwani, Morgan Stanley’s aircraft analyst, this market “could likely begin as an ultra-niche add-on to existing transportation infrastructure, similar to how helicopters operate today. They could later transform into a cost-effective, time-efficient method of traveling short to medium distances, eventually taking business away from car and airline companies.”

SkyDrive is one of over 100 flying car initiatives around the world – a race that includes Boeing Co., Airbus SE and Uber Technologies Inc. – but its plan is for a small two-seat vehicle with eVTOLs propellers in all four corners of the upper half of the craft, a design which Fukuzawa believes will enhance its safety. This battery-powered SD-xXX model would have a travel range of dozens of kilometers at 100 kmh (62 mph).

While there are still many skeptics who are cynical that these cars will ever get off the ground (so to speak), Fukuzawa imagines offering a flying taxi service to big cities in Japan, starting in the Osaka Bay area and slowly branching out. By 2050, he believes Japanese citizens will be able to take an air taxi to “any destination within the capital’s 23 wards in 10 minutes.”

“The two biggest difficulties,” he said in a recent interview, “are getting it certified for commercial flights and ensuring the same safety and reliability as existing aircraft — and changing the social climate, by letting the general public know about this air mobility, and making them want to ride a flying car.”

If and when these hurdles are overcome, the air taxi (with the ability to vertically take-off and land) could revolutionize the travel industry, reducing traffic congestion in cities, assisting citizens during natural disasters, and increasing access to remote locations.

“The initial model will fly basically on autopilot, but it’s not 100 percent autonomous because a pilot would need to maneuver it in case of an emergency, for example,” Fukuzawa says.

With drones increasingly commercialised and self-driving cars poised to soon dominate the marketplace, one can imagine a drastically different cityscape in the near future that more closely approximates science fiction movies. While there are legitimate questions about the viability of Japan’s air taxi industry – much less whether that market can spread around the world – the ‘flying car’ prototype is certainly a marvelous technology to behold.