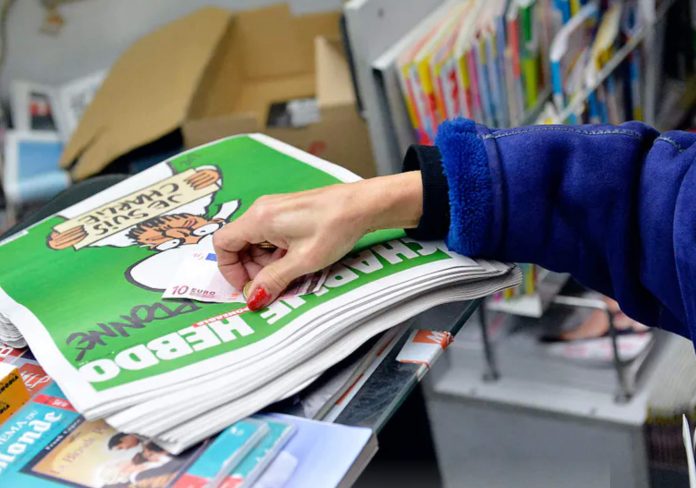 One of the most craven moments in the recent history of the British media was an interview Sky News conducted with the French writer Caroline Fourest days after the staff of Charlie Hebdo had been massacred in January 2015.

Fourest was a former columnist for the satirical magazine and a friend to many of the dead. To show her contempt for the extremism that was responsible for the murders, she held up a copy of the latest issue of Charlie Hebdo, on the front of which was the Prophet Mohammed. The panicky Sky newsreader admonished Forest and then apologised to any viewers who ‘may have been offended’. France was appalled and the clip appeared on their primetime news as evidence of how terrified the vast majority of the British media was of offending Islam.

Five years on and little has changed. In fact, the pusillanimity of the British media appears to have increased. The Guardian was one of the very few British publications to reproduce the front over of that Charlie Hebdo ‘survivor’s issue’. But when this week Charlie Hebdo put the Prophet on the front again (the first time since that 2015 issue) the Guardian reported the news but didn’t illustrate its report with the cover, which features some of the cartoons first published by Danish newspaper Jyllands-Posten in 2005 and republished a year later by Charlie Hebdo. The centrepiece of the cover depicts the Prophet with his hands over his eyes saying: ‘All of this, just for that’.

Not only has no British media outlet shown the cover but one paper, the New European, scolded Charlie Hebdo for ‘self-righteously republish [ing] the cartoons of Mohammed that led to that massacre.’

Charlie Hebdo explained why it had republished the cartoons in an editorial. ‘We have often been asked since January 2015 to print other caricatures of Mohammed,’ it said. ‘We have always refused to do so, not because it is prohibited – the law allows us to do so – but because there was a need for a good reason to do it, a reason which has meaning and which brings something to the debate.’

The reason was the start this week in Paris of the trial of the killers’ alleged accomplices in the attack. In a trial expected to last until November, fourteen defendants face charges relating to the Charlie Hebdo shooting and the murders of a policewoman and four Jewish customers in a supermarket in the 48 hours that followed.

One of the few survivors of the Charlie Hebdo attack, Laurent ‘Riss’ Sourisseau, wrote this week’s editorial and declared: ‘We will never lie down. We will never give up.’ While some see the caricature of Mohammed as ‘self-righteous’, he said it was necessary to publish the cartoon in the week the trial begins to remind the world why his colleagues died. Failure to do so would be ‘political or journalistic cowardice’. He added: ‘Rare are those who, five years later, dare oppose the demands that are still so pressing from religions in general, and some in particular.’

The mainstream media in France have all carried pictures of the latest issue, and in an address today at the Pantheon to mark 150 years of the French Republic President Macron attacked identity politics and launched a staunch defence of freedom of expression. ‘To be French, it’s first to passionately love liberty,’ he said. ‘To be French is to defend the right to make people laugh, to criticize, to mock.’

There are some, however, who share Sourisseau’s view that the Kouachi brothers achieved their primary aim in 2015, which wasn’t (as the then-president François Hollande pronounced this week) to divide French society, but to silence critics of Islam. One of Sourisseau’s former colleagues at Charlie Hebdo, the Moroccan-born journalist Zineb El Rhazoui, believes that freedom of expression had shrunk since the attack, in the face of what she described as ‘intellectual terrorism’ from Islamists and their allies on the far left.

Nonetheless, freedom of expression in France – particularly about Islam – remains healthy. It is a subject regularly debated maturely on discussion programmes and there have been dozens of books in a similar vein. France are having the ‘difficult and embarrassing’ conversations that were promised by Theresa May in 2017 after the Manchester and London Bridge atrocities but which never materialised.

Quite the opposite. Scotland’s Hate Speech Bill could criminalise criticism of Islam if it becomes law while in England, an All-Party Parliamentary Group (APPG) has introduced a definition of Islamophobia (a word rejected by most French politicians, including the former Socialist Prime Minister Manuel Valls, who called it the ‘Salafists’ Trojan Horse’) that has been endorsed by all main political parties except the Conservatives. The APPG believes that Islamophobia ‘is a type of racism that targets expressions of Muslimness or perceived Muslimness.’

Others disagree. The National Secular Society warned in January the APPG’s definition will become a ‘backdoor blasphemy law…to effectively shield regressive attitudes and practices within Islam from criticism.’

In France, satirical magazines publish caricatures of the Prophet while in Britain police are considering a request from a Muslim police organisation to replace the term ‘Islamist terrorism’ with ‘faith-claimed terrorism’ because of concerns about negative perceptions.

It’s not hard to see which country is suffering most from the intellectual terrorism of which Zineb El Rhazoui spoke.

On the day after the massacre of the Charlie Hebdo the front pages of many British nationals were headlined ‘A War On Freedom’. But it hasn’t been a war Britain, or the rest of the West, have chosen to fight. Instead France has been left alone on the front line.