You Stupid Boy
Home Freedom of Speech Free Speech? Not In France

Free Speech? Not In France 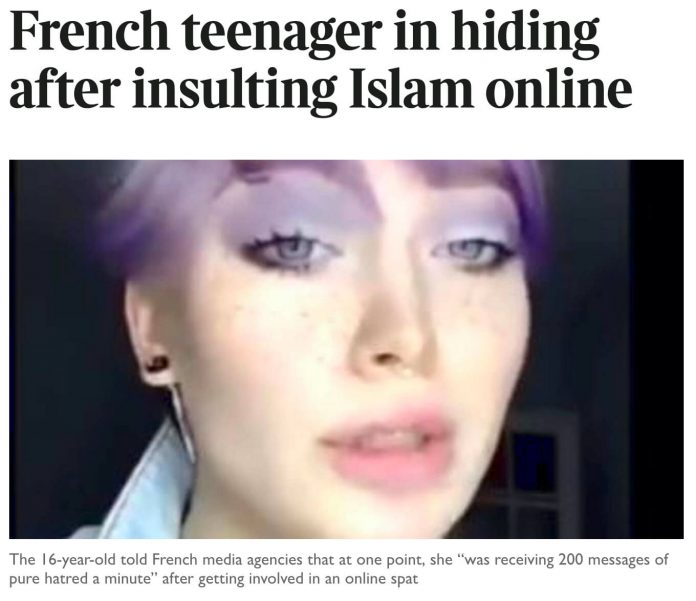 Police have told a French teenager to go into hiding after she received death threats for insulting Islam.

The 16-year-old has been advised to stay away from her lycée (sixth-form college) in southeast France after calls on the internet for her to be killed, raped or attacked.

Great police protection! A 16-year-old girl is threatened with death, and the police tell her to “go into hiding.”

The girl, named only as Mila, is understood to have been told by officials that she should avoid being seen in public until the controversy fades.
***
Prosecutors said two separate criminal inquiries were under way, the first to track the authors of threats to kill and rape the teenager, the second to determine whether her comments amounted to the offence of hate speech.

The authorities apparently draw an absurd equivalence between murder and “hate speech.” This the background on the controversy, which has roiled France:

The girl, who lives in the Isère area near Lyons, and wants to become a singer, was sharing a live video on Instagram on Saturday when she became embroiled in a row with a male Instagram user making what she calls “heavy-handed propositions” online during her broadcast.

When she refused his sexual advances, he called her a “dirty dyke” and mentioned that he was a Muslim. She responded by saying that: “I hate religion. The Koran is . . . full of hate. There is only hate in it. Islam is a shit religion. That’s what I think.”

Whether you agree with Mila or not, and regardless of whether you think she overreacted to a heavy-handed sexual proposition, followed by being called a “dirty dyke,” she has a right, in any sane country, to say what she said without having to fear murder, rape or other felonious assault.

Solveig Mineo, who defines herself as a feminist and a “Westernist”, said: “This is what a young girl risks in 2020 for having said no to a boy.”

Free speech is under attack all around the world, and the most common means of suppressing inconvenient or unpopular speech is labeling it “hate speech,” a phrase with no non-politicized meaning, and, in the U.S. at least, zero legal status.

I guess we can look forward to Angry and Cindy introducing this kind of thing into our laws this year. Just one more reason not to vote for them, any member of the COL or the Nats. Can you see Simon getting out on the hustings, saying they are opposed to this kind of change to our way of life? Nah, neither can I.

Free speech IS NOT hate speech.

Previous articleHave Your Say
Next articleCure For Cancer?