Freedom to speak your mind 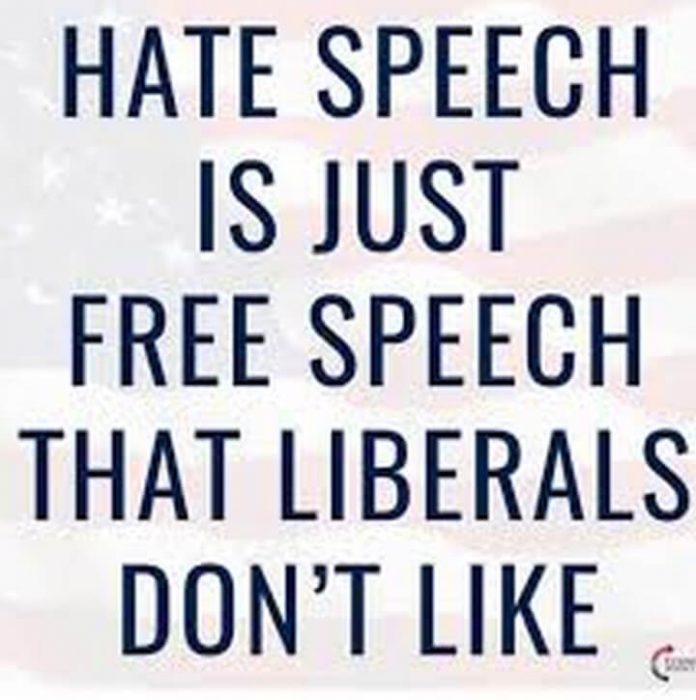 Only freedom of speech can preserve republican self-government, and only it can cool the fanatical hatreds and false theories underlying identity politics.

Much evidence suggests that freedom of speech may be banned in the coming years under the guise of regulating “hate speech.” Many on the left who demand and welcome this development do not foresee the broad consequences of their actions. Nor do many defenders of free speech sufficiently examine the left’s reasons for banning it.

Just in the past few years, U.S. senators proposed to outlaw words they deem offensive; New York City attempted to fine residents $250,000 if they say “illegal alien”; Big Tech companies continue to ban certain kinds of speech from their platforms; deeply embedded regulatory and judicial precedents, originating in civil rights laws and the sexual liberation movement, have expanded their reach into the private sphere, permitting bureaucrats and activists to regulate speech; and denunciations of individuals and institutions who speak contrary to identity-politics dogma are commonplace.

These are not isolated instances of far-left overreach. Rather, as an earlier generation’s liberalism is subsumed into identity politics, free speech, in conflict with identity politics’ central claims, becomes its first and most important target of attack.

The Cost of Losing Free Speech

To understand the political and moral consequences of losing freedom of speech, we should examine its original purposes, of which there are three: political liberty, freedom of the mind, and the formation of republican habits of character. For Benjamin Franklin, these purposes were related: “Without Freedom of Thought, there can be no such Thing as Wisdom; and no such Thing as public Liberty, without Freedom of Speech.”

Political liberty is not possible without freedom of speech. On the one hand, arguments about the common good and public policies must be presented to citizens if they are to rule themselves — and to do this, citizens must be free to discuss “the Propriety of Public Measures and political opinions,” as Franklin says. On the other hand, free speech is also a necessary tool for exposing and keeping in check “narrow thoughts and narrow men.”

Among other things, this means that free speech can compel the obedience, not to say the virtue, of public officials and oligarchs to the public interest. As the Continental Congress declared, through free speech “oppressive [public] officers are shamed or intimidated, into more honorable and just modes of conducting affairs.”

Thomas Jefferson, for example, writes in “Notes on the State of Virginia” that “reason and free inquiry are the only effectual agents against error” brought on through religious or ideological fanaticism. Reason can publicly test the truth of all claims and thus prevents the onset of intellectual despotism.

Third, freedom of speech plays a central role in forming the habits of character necessary for republican government. Through it, citizens develop the habit of speaking and thinking freely about all matters of public concern, and in doing so, they are trained in forming sound judgment. As such, citizens become less drawn in by romantic, revolutionary, and impossible undertakings, tendencies democracies are especially given to.

Moreover, and perhaps most importantly, freedom of speech cultivates in citizens the mental habit of persuading fellow citizens through reason. This habit, correspondingly, cultivates an openness to being persuaded by reason. The opposite of persuasion is force. Persuading one’s fellow citizens rather than compelling them becomes the primary mode of political interaction. As such, the strong, natural passions of pride and anger are moderated by the demand to speak rationally, to persuade others, and to defend one’s views.

Such habits of mind took generations to form in a single people but can easily be lost. A cursory look at the various peoples of the world plainly shows how rare these habits are. Restriction of free speech in America will cause a decline in these moral and mental prerequisites to self-rule. The loss of the capacity to think for oneself and form rational judgments about the common good and human merit will give rise to the rule of anger, resentment, and force.

Despite these serious political and moral justifications, we still may ask: why is freedom of speech a natural right? The answer: since human beings are individuals, belonging to themselves, their mental faculties belong to them, too, and their speech, as a product of their faculties, also belongs to them. In other words, no one has a right to another’s mind.

As James Madison explains, man has “an equal property in the free use of his faculties.” This is closely related to Madison’s observation that “a man’s conscience . . . is more sacred than his castle,” the violation of which is coequal to breaching the social contract.

Today, identity politics threatens to undermine political liberty and to undo these habits of mind and character by demanding bans on so-called “hate speech.” Identity politics is a winner-takes-all ideology, pitting the victimized or marginalized — who demand liberation, celebration, and equal self-respect — against the so-called oppressor group, which, in the American context, is defined explicitly as whites. The oppressor identity must be condemned, punished, and silenced. There is no place in this view for civic accommodation or reconciliation.

“Hate speech,” it must be noted, has little to do with racial epithets or Holocaust denial. Rather, according to its most influential definers, it is speech that harms the self-respect of the so-called marginalized. Indeed, the very purpose of “hate speech” regulation is one-sided: The marginalized are permitted to speak freely, while the so-called oppressor group must be silenced.

On this logic, Malcolm X’s expression “white devil” is as tolerable as it is to say today that the “greatest terrorist threat in this country is white men.” As leading speech-criminalization advocate Mari Matsuda writes, society must tolerate speech “that comes from an experience of oppression.”

In fact, the hateful speech of the marginalized should not merely be tolerated but also encouraged when directed against the oppressor group. If, as identity-politics advocates insist, the liberation of marginalized groups depends on disrupting or undermining the power and identity of the oppressor, then “hate speech” toward the oppressor is courageous, heroic — and necessary. An “angry, hateful poem by a person from a historically subjugated group” should be interpreted as “a victim’s struggle for self-identity in response to racism,” writes Matsuda.

Not surprisingly, in Europe and Canada, where “hate speech” is already criminalized, the public square is filled with speech that freely maligns Christianity, heterosexuality, and legacy populations. “Hate speech” laws do not stop such speech because they are not supposed to. They allow and encourage extremists and ideologues to monopolize the public conversation with their hatred and calumnies.

What kinds of speech, then, are forbidden to the oppressor group? First, needless to say, are group epithets — but these are merely the public examples used to persuade the decent-minded. Most important to speech-criminalization advocates is silencing all criticisms — regardless of how rational or well-meaning — of marginalized groups which they deem harmful to their self-respect.

Perhaps most astonishingly, speech prohibitions would extend even to facts that may call into question the self-respect of the marginalized. As leading speech-criminalization advocates Richard Delgado and Gene Stefancic write, speaking about the statistically documented disparities in educational preparedness of affirmative action recipients is deplorable “hate speech.”

Factual, provable claims such as these are labeled “hate speech” in multiple other areas if they are regarded as threatening to the self-respect of the marginalized. One sees this conflict underway, for example, between medical doctors and transgender activists.

On this logic, broader factual disputes would also be judged impermissible. As Delgado and Stefancic write, because “even a determined judiciary will not be able to enforce equality and racial justice” by banning “hate speech.” Thus, the oppressor group’s culture and opinion of itself must be reshaped so that positive depictions in films, advertisements, newspapers, or academic scholarship — whether true or not — of marginalized groups predominate. This will also bolster the self-respect of the marginalized, regardless of whether such self-respect is actually earned.

Identitarians, in other words, must replace the oppressor’s cultural images and narratives with new mythologies about the marginalized — while shielding these new images from scrutiny or criticism. It would thus become impermissible to dispute false narratives of the marginalized: for instance, that all of history is a story of patriarchal oppression and subjugation of women; or that gender is merely a social construct, freely chosen by individuals; or that the United States is founded fundamentally on white supremacy, as the New York Times’s 1619 Project asserts.

A Conflict That Must Be Won

Banning “hate speech” requires nothing short of a revolution that marks the end not only of freedom of mind but also of what remains of political self-rule in America. It requires the removal from legitimate political deliberation of all essential political questions that may harm the self-respect of the marginalized.

As the sphere of permissible political speech narrows to the point of irrelevance, even seemingly neutral topics like welfare become off-limits. As some academics write: “race-neutral [political] campaign themes” like welfare policy “carry demonstrably racially loaded undertones.” Almost nothing is left to the sphere of political deliberation — even tax policy likely harms some marginalized groups. Self-rule is fundamentally undermined.

Most Americans do not yet understand how far this powerful movement has already advanced. Only 53 percent of college students — a bare majority — still support freedom of speech today. This is truly alarming.

Judicial and regulatory precedents for limiting speech are already on the books, and they can and likely will be used to restrict even private speech. These legal standards will be exploited in the coming years by activists and the administrative state; and Big Tech companies, whose platforms have become an essential venue for public deliberation, will continue to implement bans following a similar logic.

The conflict between identity politics and republican self-government will become more pronounced in the coming years. Unlike most policy disputes, freedom of speech is a civilizational principle: only it can preserve republican self-government, and only it can cool the fanatical hatreds and false theories underlying identity politics. But Americans should not count on the courts to save them. We need a new and courageous political class that understands what is at stake if free speech and republican self-rule are to survive. 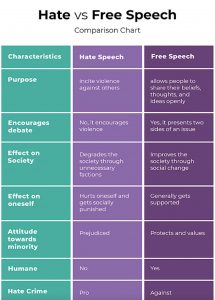 Summary of Hate vs Free Speech