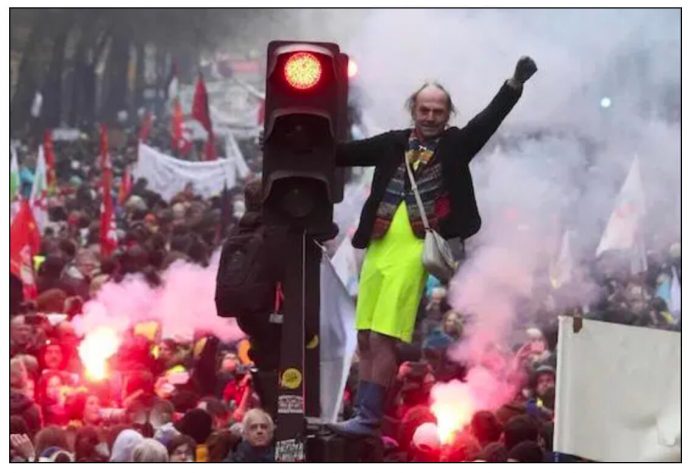 From John Hinderaker in France

France is a country where, politically speaking, no good deed goes unpunished. Thus, protests against President Macron’s plan (as yet unspecified) to deal with that country’s unsustainable pension obligations have brought France to a near-standstill.

Officers came under a hail of bricks and other objects from extremists who had infiltrated a trade union march. …

Officials said that about 500 violent activists dressed in black and wearing masks had joined the demonstration, working in groups of 20 or 30, attacking police and causing mayhem. They set fire to building sites, rubbish bins and shops along the route, sending palls of black smoke into the Parisian skyline.

But it wasn’t just a handful of violent extremists turning out to protest:

At least 244 separate marches were held across the country, attracting an estimated 280,000 people. Trade unions claimed that 250,000 had taken part in the Parisian protest alone, but many observers said that was an exaggeration.

Strikes across France brought the country to a standstill with schools, railway stations and public buildings forced to close. Nine out of ten trains were cancelled, while more than 50 per cent of teachers stayed home today. In Paris 11 of the 14 underground lines were closed.

The yellow vest movement got into the act, although their original–the inflated price of fuel–is far removed from the demands of those who don’t want to give up their pensions:

Elsewhere, the yellow vest protesters who brought chaos to much of the country last year returned to the streets, blocking roundabouts, roads and petrol depots. Police used tear gas to clear about 300 of them who had blockaded a roundabout in Rouen, Normandy.

Lorry drivers added to the disruption by driving at a snail’s pace along main roads in provincial France to ensure lengthy traffic jams.

To some extent, the conflict here is generational: older people don’t want to give an inch on their promised pensions, however unrealistic they may be, while young people will be left holding the bag. But that didn’t stop young leftists from joining in:

Student unions joined the movement, with two people suffering minor injuries when they were stabbed outside Montpellier University in what appeared to be a clash between an ultra-right group and far-left activists.

Mr Macron wants to end the special pension plans made available to public sector workers, many corporations and professions such as lawyers by rolling them into a single state scheme.

Lawyers! Why didn’t we think of that?

His supporters say France can no longer afford the 42 special schemes that enable railway employees, for instance, to retire from the age of 55 and which cost taxpayers about €8 billion a year. However, the president has yet to divulge his plans in detail.

Similar debates are going on across the developed world. So far, the oldsters seem to be winning, but you can’t fight arithmetic. One way or another, that which is unsustainable won’t be sustained.

Previous articleHave Your Say
Next articleFact Or Fiction? False News or Truth?