You Stupid Boy
Home US Politics Getting the business done

Getting the business done 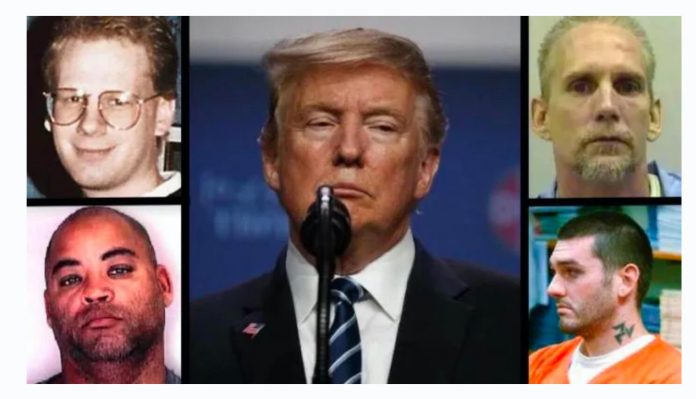 While Everyone Was Talking About Covid-19, Trump Wins Battle To Execute 4 Child Murderers

While the whole world remains distracted by the coronavirus, President Donald Trump is keeping his head and taking care of business.

Following his recent victory in the District of Columbia’s U.S. Court of Appeals to resume federal executions, President Trump is starting with four men who are guilty of the most heinous crime of child murders.

Reuters is reporting the Trump administration’s effort to resume federal executions got a boost on Tuesday from a U.S. appeals court, which tossed a district judge’s injunction that blocked four death penalty sentences from being carried out.

MadWorld report: The 2-1 ruling by a three-judge panel of the U.S. Court of Appeals for the District of Columbia Circuit could pave the way to the Justice Department carrying out the first execution of federal death row inmates since 2003, although other issues remain to be litigated.

The two judges in the majority, Greg Katsas and Neomi Rao, were both appointed to the bench by Republican President Donald Trump. The dissenting judge, David Tatel, was appointed by Democratic President Bill Clinton.

The court concluded that U.S. District Judge Tanya Chutkan was wrong to find in her November ruling that a law called the Federal Death Penalty Act requires the federal government to follow all execution protocols in the state where the execution is set to take place. The two judges in the majority differed on what aspects of state rules the federal government have to follow.

Trump admin powered through 16-years of lawsuits over federal executions.

Most executions in the United States have been carried out by states rather than the federal government, which has been hindered by protracted litigation over the drugs used in lethal injection executions.

The inmates scheduled for execution by lethal injection all were convicted in federal courts of murdering children. They are Daniel Lee, Wesley Purkey, Alfred Bourgeois, and Dustin Honken.

“The men, whose ages range from 37 to 67, have each been convicted of heinous crimes, and together have been involved in the slayings of 13 victims. The cases fell under federal jurisdiction because of how or where they were carried out,” New York Times reports.

Daniel Lee, a white supremacist who lived in Oklahoma, was convicted in 1999 of murdering an Arkansas gun dealer, William Mueller, as well as his wife, Nancy Mueller, and her 8-year-old daughter, Sarah Powell.

Wesley Purkey, of Lansing, Kan., kidnapped a 16-year-old girl, Jennifer Long, in Kansas City, Mo., and brought her to his house, where he raped her repeatedly and, after killing her, dismembered and burned her body.

Alfred Bourgeois, a trucker from La Place, La., was sentenced to death in 2004 after he was convicted of murdering his 2-year-old daughter at Naval Air Station Corpus Christi, making it a federal crime.

Dustin Honken, of Mason City, Iowa, killed five people in 1993 with the help of his girlfriend, who was once one of only two women on federal death row.

“However, the three-judge panel of the D.C. Circuit Court of Appeals splintered on the federal government’s legal obligations to follow state execution procedures, making it virtually certain that the ruling issued Tuesday will not be the final word on the issue,” Politico reports.

“The claims before us are designed neither to prevent unnecessary suffering nor to ensure that needles are properly inserted into veins—a task that nurses routinely perform without difficulty,” Judge Greg Katsas, an appointee of President Donald Trump wrote.

“Instead, they are designed to delay lawful executions indefinitely. We should not assist in that undertaking,” he adds.

The federal law in question, mandating that officials use the “manner” of execution authorized in a state where a death-row inmate was convicted, leaves the issue to the discretion of the feds if that state does not allow the death penalty.

Today, 54 percent of Americans favor the death penalty for people convicted of murder, while 39 percent are opposed, according to a Pew Research Center survey conducted in 2018.

About three-quarters of Republicans (77 percent) currently favor the death penalty, compared with 52 percent of independents and 35 percent of Democrats.

The law has spoken on these heinous murderers. They all have escaped execution based on a loophole in the federal law. It’s time they meet their maker and not cost taxpayers any more money in keeping them alive. May God have mercy on their souls, and may they truly repent of all the immense suffering they have caused here on earth.

It’s a no brainer. Anyone who commits these henous crimes against young children doesn’t deserve to live. KILL THE FUCKERS AND BE DONE WITH THEM.