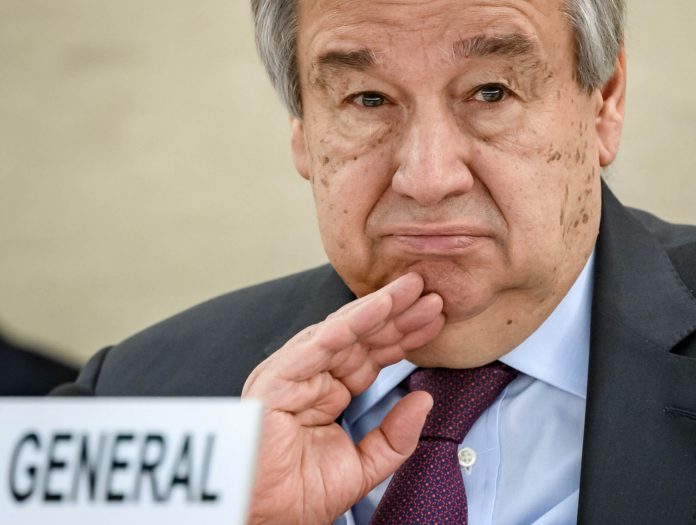 As the world continues to grapple with the deadly consequences of the coronavirus pandemic, U.N. Secretary-General Antonio Guterres said only one thing is certain in its wake: “a new model of global governance” is coming and the globalist body is doing all it can to hurry its arrival.

The Portugese socialist made his prediction Saturday as he delivered the Nelson Mandela Lecture and spoke of the need for the U.N. to address “the huge gaps in governance structures and ethical frameworks” the epidemic has exposed. He said:

To close those gaps, and to make the New Social Contract possible, we need a New Global Deal to ensure that power, wealth and opportunities are shared more broadly and fairly at the international level.

A new model for global governance must be based on full, inclusive and equal participation in global institutions.

A New Global Deal, based on a fair globalization, on the rights and dignity of every human being, on living in balance with nature, on taking account of the rights of future generations, and on success measured in human rather than economic terms, is the best way to change this.

The worldwide consultation process around the 75th anniversary of the United Nations has made clear that people want a global governance system that delivers for them.

Communists like Guterres want a global dictatorship that delivers for them and nobody else. You got to read that right.

Guterres then outlined his plan for the future of the world, citing his “New Global Deal,” to be based on “a fair globalization, on the rights and dignity of every human being, on living in balance with nature, on taking account of the rights of future generations, and on success measured in human rather than economic terms, is the best way to change this.”

The 71-year-old professional bureaucrat claimed a “worldwide consultation process around the 75th anniversary of the United Nations has made clear that people want a global governance system that delivers for them.”

He also maintained the time has come for the “developing world” to have a far stronger voice in global decision-making. This reformation of international governance will be linked to financial relief and the forgiveness of debt for struggling countries. He said:

Reform of the debt architecture and access to affordable credit must create fiscal space for countries to move investment in the same direction.

Been there, done it. In fact, it’s a pattern that keeps repeating. African shithole countries squander the money we give them and when it’s all gone they come for more. Hopeless.

This is not the first time Guterres,  a member of the Portuguese Socialist Party who served as Prime Minister of Portugal from 1995 to 2002, has spoken fondly of his desire to see the world recast along socialist principles.

That’s very charitable. He speaks about nothing else.

As Breitbart News reported, earlier this month he demanded “more robust global governance,” adding the World Bank and the International Monetary Fund (IMF), regional authorities such as the African Union and the European Union (E.U.) to a list of organizations he says can bring “order” to a future world disrupted by the coronanvirus pandemic.

In an essay titled ‘Global Wake-up Call’, the unelected head of the globalist body said “from COVID-19 to climate disruption, from racial injustice to rising inequalities, we are a world in turmoil.”

His solution to that disorder is more big government,  and more bureaucratic institutions in more places, delivered via the U.N. and its multiple agencies all funded by the contributions of taxpayers around the world.

From Us; I am unvaccinated. I am pure-blooded. I don't comply. I love freedom .......... From Them; Wear your damn mask. You are a terrorist. You are...
Read more
Chinese Virus