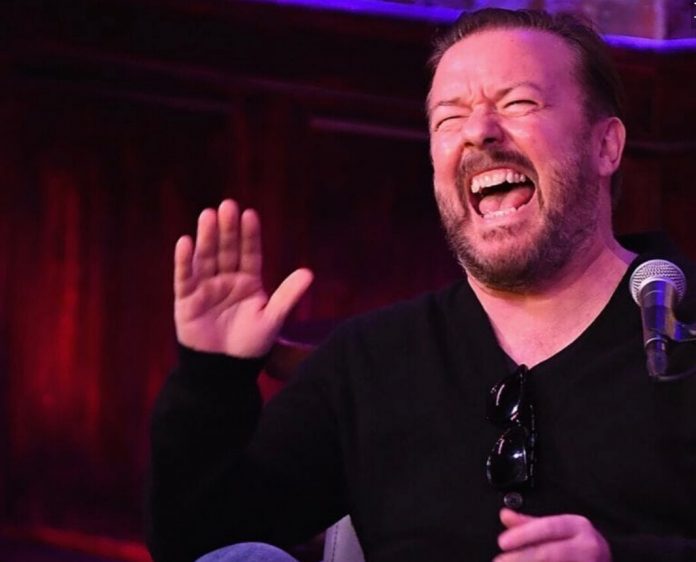 Social media debate was heated if not in good taste after British comedian Ricky Gervais decided the activities of a transgender individual in Canada were way beyond his tolerance for absurdity.

Vancouver resident Jassica Yaniv made headlines this year when he lost a human rights discrimination case filed against salons that would not wax his genitals.

The 32-year-old has not had gender reassignment surgery.

Yaniv popped up again on Twitter this week to complain about a new version of discrimination.

He posted that a local gynecologist “literally told me today that ‘we don’t serve transgender patients.’ And me being me, I’m shocked.. and confused… and hurt. Are they allowed to do that legally?”

The tweet was eventually deleted, but not before Gervais decided the whole issue needed a dose of mockery.

“It’s disgusting that a qualified gynaecologist can refuse to check a lady’s cock for ovarian cancer. What if her bollocks are pregnant? She could lose the baby. I’m outraged,” he posted on Twitter.

Gervais then shared his dilemma of what to do after Yaniv’s tweet was deleted.

“Damn. The sex-pest troll deleted their tweet,” he said. “My reply looks mental now. Should I delete too or leave it there like some weird, cryptic fossil imprint?”

Gervais defended his mockery of Yaniv with those who disagreed with him.

And by ‘minority group’ you mean ‘racist sex pest trolls’ I assume. Do some research, you stupid, virtue-signalling fool.

Agreed. That’s why I include them in my comedy.

Not transgender people. One transgender person who targeted vulnerable women of colour to try to get them to wax their balls and then sued them. Do some research.

I get myself in trouble I’ll visit a gynaecologist 😇

Gervais also noted on Twitter that the “weirdest moral argument” on the incident was one critic of his saying that criticizing Yaniv “made ALL trans people look bad.” “Insane,” he said. “It’s like imposing a blasphemy law.”

The comedian has been tapped as host of next month’s Golden Globes, which has brought criticism from some who believe his comments about transgenders should make him ineligible.

“Gervais has developed a reputation for being consistent in his transphobia — whether on stage or not, situated in a joke or not, on stage or on his social media. He has made it evident by co-signing the venomous, misinformed opinions and five minute hot-takes by hostile agitators that he simply doesn’t like trans people. That makes his jokes no longer jokes, but a sermon of his personal beliefs. It’s not funny anymore, just uncomfortable to witness,” transgender activist Phaylen Fairchild wrote on Medium.

“As hate crimes across the US and UK spike in regards to violence against the transgender community,” Fairchild wrote, “it would have been prudent, if not simply responsible, to consider a host that doesn’t have to rely on the misfortune of a marginalized and politically imperiled minority for their routine as Gervais has demonstrated before the entire world time and time again.

“The platforming of Gervais in a time of such social unrest is reckless if not altogether cruel.”

Previous articleHave Your Say
Next articleSpiral Galaxy Far Far Away