You Stupid Boy
Home Chinese Virus Goebels would be proud

Goebels would be proud 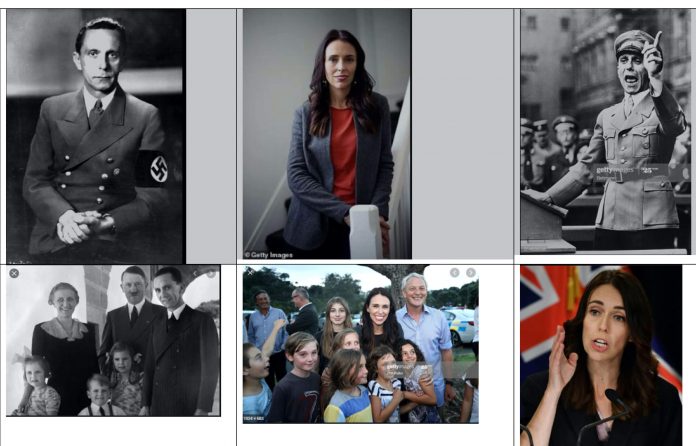 From ysb “Goebels had nothing on her…. ( but have you looked closely at Images of Ardern and Goebels…. )

“On enforcement, Ardern said level 3 came with higher trust but there would still be police acting as enforcers which would act on large groups congregating.”

New Zealand will move to level 3 of lockdown from 11.59pm next Monday, April 27.

Alert level 3 will be held for two weeks and then Cabinet will assess whether to move down another level.

Prime Minister Jacinda Ardern made the announcement just after 4pm today. Cabinet wanted to “lock in some gains” and give some certainty, Ardern said.

Level 4 had originally been scheduled to lift on Thursday this week.

“Ultimately we have taken a balanced approach,” Ardern said.

Ardern said at every point along the way the Government’s decision was based on health and economic advice, and NZ was in the fortunate position that those were linked.

Director General of Health Ashley Bloomfield recommended, in writing, that Cabinet make the decision it had made, said Ardern.

Any businesses needing to prepare to move into level 3 could be accessed, Ardern said, as could schools, to prepare for the return of pupils. April 28 will be a teachers’ only day and April 29 will be the first day of term.

On businesses accessing their premises, it wasn’t an invitation to open or trade, she said – just to prepare.

The War Against The Unvaxxed Will Not Be Forgotten Written by Dr Joseph Mercola If you refused to buy into the official narrative about the COVID...
Read more
NZ Politics

MATT KING HAMILTON LAST NIGHT it was heartening to see so many like-minded people at last night's meeting in the Whatawhata Pub. I stopped counting...
Read more
Chinese Virus