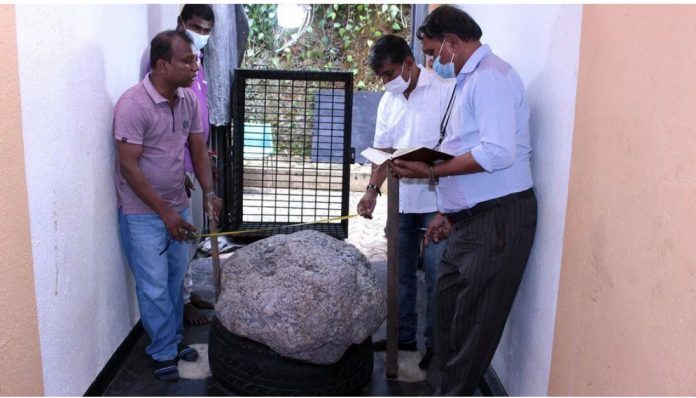 Workers digging a well in the backyard of a home in Sri Lanka unearthed an enormous star sapphire cluster that is estimated to be worth a staggering $100 million.

The massive stone was reportedly discovered during what was expected to be a routine home improvement project outside the residence of a gem trader living in the city of Ratnapura.

It would appear that the job wound up paying for itself and then some when the crew conducting the dig stumbled upon the stunning find.

Weighing approximately 1,125 pounds or a whopping 2.5 million carats, it is believed to be the largest star sapphire cluster ever found.

The homeowner who now possesses the incredible stone, which he has dubbed the ‘Serendipity Sapphire’ by virtue of its accidental discovery, has understandably opted to keep much of his identity shrouded in mystery, going by only his surname and withholding his location in order to protect his newfound precious property.

Although the precise value of the discovery has yet to be determined, an analysis of some stones which fell from the cluster indicated that they are of high quality and, therefore, it could fetch more than $100 million from a private collector or a museum if the remainder of the monstrous rock is of a similar caliber.

Fukushima Nuclear Plant Water To Be Released Into The Ocean The operator of the wrecked Fukushima nuclear power plant said Wednesday it plans to build an undersea...
Read more
World News

Fact check: how much US kit have the Taliban got?

With the war in Afghanistan having officially ended on Monday, the world’s thoughts have turned to how the Taliban will govern Afghanistan – and...
Read more