You Stupid Boy
Home World News Good on him 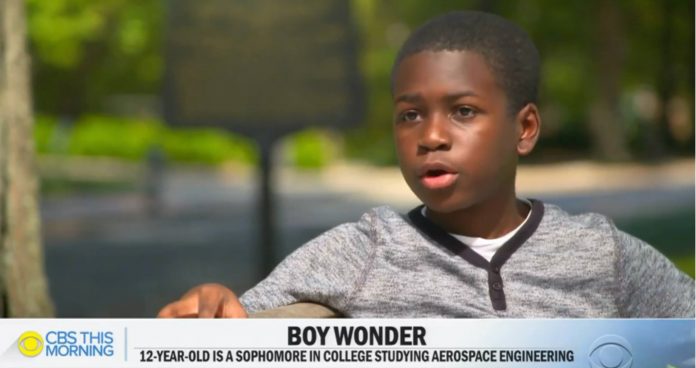 Twelve-year-old Caleb Anderson knew sign language by the time he was only nine-months-old, could read by age one, and knew how to do fractions at just age two.

A 12-year-old genius is on his way to receive an aerospace engineering degree in just two years, an incredible feat.

If that’s not shocking and impressive, according to CBS, twelve-year-old Caleb Anderson knew sign language by the time he was only nine-months-old, could read by age one, and knew how to do fractions at just age two.

Anderson is now in the process of attending his second year at Chattahoochee Technical College in Georgia the U.S. and Anderson already got his sights set on working for Tesla owner Elon Musk.

Anderson hopes to get an internship with SpaceX founder Musk, speaking to USA Today earlier this year, he said: “When I was like one, I always wanted to go to space. I figured that aerospace engineering would be the best path.”

Anderson doesn’t see himself as a genius telling CBS: “I’m not really smart. I just grasp information quickly. So, if I learn quicker, then I get ahead faster.”

He added: “This is my life. This is how I am. And I’ve been living this way my whole life.”

Being so incredibly smart hasn’t always been a walk in the park for Caleb though, as he admits middle school was “awful.”

“The kids there, they kind of looked down on me, they treated me like I was an anomaly,” he said. “And I kind of am.”

Despite his previous treatment in middle school, Anderson is excited about college stating quite the opposite, telling USA Today: “It’s really accepting. People might think something about it, but they don’t show it which is really nice.”

Although Anderson is in his second year at Chattahoochee Technical College and he has had much success. The young boy and his family want him to attend Georgia Institute of Technology or the Massachusetts Institute for Technology.

His mother Claire explained: “We want him to be in an environment where he is accepted and not tolerated.”

Professor Mark Costello, chair of Georgia Tech’s School of Aerospace Engineering said Caleb was “the perfect candidate” for the course and will “be very successful” if he attends.