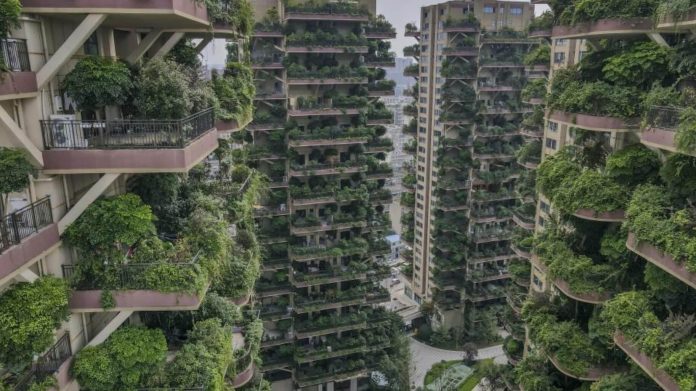 A pioneering effort to turn apartment buildings into a lush vertical forest has transformed into something more like a green hell teeming with mosquitos.

The problem of improving air quality in heavily-polluted cities across the world is one of the big challenges faced by urban planners, especially in the 21st century as greenhouse gas emissions climb and temperatures increase across the world.

However, a pioneering effort to transform high-rise apartment buildings into a lush “vertical forest” has transformed what was meant to be a green paradise into something more like a green hell teeming with some of the most irritating and obnoxious insects known to mankind.

Residents at the experimental green Qiyi City Forest Garden housing complex in Chengdu, China, were hoping for a respite from the concrete jungle by moving into the manicured green space of the vertical forest.

The developer quickly managed to sell all 826 apartment earlier this year, but the ultramodern eight-tower complex touted as an “eco-paradise” now resembles a post-apocalyptic jungle nightmare – complete with incessant swarms of mosquitoes buzzing and nibbling away at residents’ health and sanity.

Because of this monstrous turn of events, only a small number of families have decided to brave the bug infestation and move into the complex. So far, 20 families have moved into the sprawling complex, as is clear from the pruned plants and outdoor furniture that adorns several balconies, along with the lights switched on inside the units.

But with plants sprawling between neglected balconies and branches twisting across the railings of towers and merging into one another, the 2018 development is quickly reverting to the primordial nature of the forest.

The idea of vertical forests was a concept developed by Italian architect Stefano Boeri, who designed the stunning vertical garden Bosco Verticale in Milan in 2014 before bringing the concept to polluted cities across the world, from Albania to Egypt and the Netherlands.

The general idea is to balance mother nature and biodiversity with the needs of the urban population by covering the buildings in balconies planted with species appropriate to local climate conditions, while maintaining a variety of heights and blooming seasons so that the buildings remain aesthetically pleasing year-round.

Plants on all levels of the building also provide natural shading and an improvement to residents’ air quality. The plants would also contribute to the ecological balance of the surrounding urban center, absorbing several tons of carbon dioxide while contributing even more oxygen annually.

The same fantastic idea has been used for dozens of other concepts, including Koichi Takada’s Urban Forest and the futuristic Cloud Corridor skyscrapers planned for Los Angeles.

However, the problem at Chengdu’s Qiyi City Forest Garden doesn’t mean that the concept itself is flawed – instead, this could just be a problem of the property managers neglecting the basic needs of the building itself, according to landscape architect and New York Botanical Garden instructor Daryl Beyers.

“Just because it looks cool, absorbs CO2, is a noise buffer, and offers psychological benefits, doesn’t mean you don’t have to do it properly,” Beyers told Curbed. “And I think [the developers] rushed into it. They didn’t think about the maintenance.”

“You can’t have a garden without a gardener,” he added. “They [developers] were touting it as a manicured garden outside on your deck. If it’s manicured, someone has to do the manicuring.”

Additionally, the humid climate in the Chengdu region also provides the perfect habitat for thirsty mosquitoes to thrive, while the overgrown plants also provide much-needed shade to the pesky insects.

Indeed, the lesson here is that sometimes nature wins – especially when people, or in this case landlords, slack off and ignore their responsibilities.

“It is sort of apocalyptic, and that’s what nature will do to all our cities if everything goes to hell,” Beyers said. “You see it in the movies. Plants will do those things.”