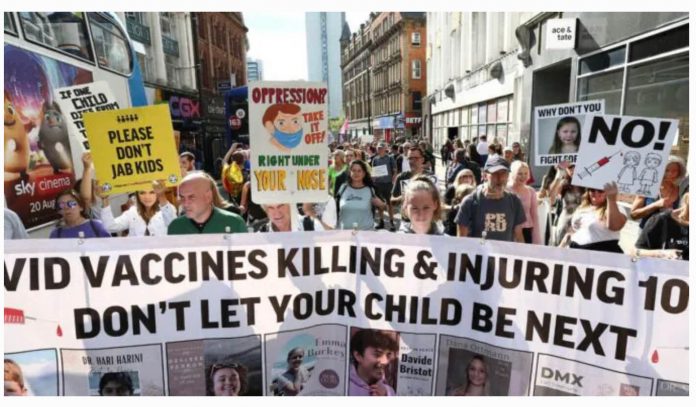 Niamh Harris
Hard core ‘anti-vaxxers’ may need to be “deradicalised” like “terrorists” according to a so called psychology expert.

According to Professor Stephan Lewandowsky, chair of cognitive psychology at the University of Bristol, around six million eligible Brits have still not received a single injection of the vaccine, which he finds deeply upsetting.

Lewandowsky considers the hard core vaccine refuseniks to be “marginalised” people and “very difficult to reach for anything.”

ITV news reports: He told the PA news agency: “They’ll refuse anything – ‘I’m not going to wear a mask’, ‘I’m not going to get vaccinated’, ‘I don’t think climate change is happening’, ‘Covid is a hoax’, and, you know, ‘Hillary Clinton is actually a reptilian shapeshifter’.

“You’re getting to people who hold a cluster of very exotic beliefs – now, they’re very difficult to reach.”

Measures that could be used to reach more moderate people who remain unvaccinated, he said, include assigning vaccine appointments to people rather than asking them to book their own, or setting up pop-up clinics in places like supermarkets or shopping centres.

Another measure would be introducing a vaccine mandate, which he said “will disgruntle a few people” but “can be effective”.

But for those with more extreme views, he said, those methods may not be effective.

He added: “In the ideal world, time and money permitting, you can engage even those people in a very slow, long-term process where you affirm their right to have those beliefs… rather than telling them something about themselves they don’t want to hear, let’s put it that way.

“So you tell them something positive, and then engage in what is effectively the same as a deradicalisation process for former terrorists, or cult members.

“Because we’re really talking, when we get down to that small number of committed refusers, we’re talking about the psychology of cults and extremism, and it’s a very similar psychology.”

Mr Lewandowsky said online misinformation is a contributing factor, adding that while some steps had been taken to remove false claims, sites like Facebook and YouTube are “not doing enough”.

“One of the reasons these hardcore refuseniks exist is because they can live in their own ecosystem of misinformation,” he said.