You Stupid Boy
Home World News Hey Phail Twitford, This Is How You Build Things In A Hurry

Hey Phail Twitford, This Is How You Build Things In A Hurry 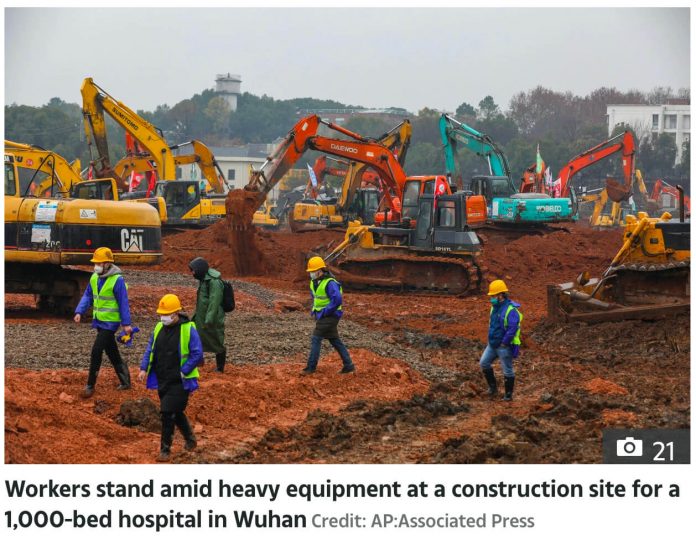 CHINESE officials are rushing to build a 1,000-bed hospital in a matter of days in the epicentre of the coronavirus outbreak as crowds are swarming the hospitals.

Images from Wuhan show construction diggers and workers on a massive plot of soil laying down the foundation for a makeshift hospital dedicated to treating patients struck down with the deadly virus.

The virus, which is believed to have originated at a meat market in Wuhan, has killed 26 people.

At least 41million people in 14 cities are on lockdown in the Hubei province as officials have banned residents from travelling in order to try and contain the spread of the virus.

Wuhan authorities say the hospital will be completed by February 3.

They said it will be on a 270,000 square-foot lot and will be modelled after the makeshift the Xiaotangshan SARS hospital in Beijing that was built in 2003.

The SARS hospital was built from scratch in 2003 in just six days to treat an outbreak of a similar respiratory virus that had spread from China to more than a dozen countries and killed about 800 people.

The hospital featured individual isolation units that looked like rows of tiny cabins.

Wuhan has been dubbed “zombieland” by desperate locals.

The central Chinese city, which has a population of 11 million, is the epicentre of the crisis with the virus believed to have originated from snakes at a live animal market in December.

Last week, it emerged that the bug can be passed from human to human – yet authorities in Wuhan only locked down its transport links on Thursday.

Residents in the “ground zero” city, where the virus originated, have been told to avoid crowds and not to attend public gatherings leaving the streets looking like a ghost town – despite its 11 million population.

Other images online show a sea of people wearing masks crowding a corridor in a hospital as they wait to see a doctor.

Some residents tried to flee to other cities, it has been reported.

All transport links in Wuhan were locked down in a desperate bid to stop the spread of the bug.

It comes residents 14 cities in the Hubei province, which is where the epicentre of the outbreak, have been banned from travelling, according to state-run Global Times.

Seven million people in Huanggang have been told not to leave after there were confirmed cases. 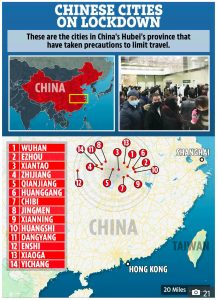 And at least one million residents in Ezhou are unable to travel after the rail stations were shut.

In Zhijiang city, all public venues have been shut down except hospitals, supermarkets, farmers’ market, gas stations and drug stores, Hubei Daily reported.

Indoor entertainment venues in Enshi city have also been shut down, it said.

Officials in the Chinese capital have scrapped events including temple fairs, which usually attract thousands of tourists.

Beijing authorities announced on social media that the move was to help epidemic prevention and control.

Beijing Tourism Net said the Beijing Ditan and Longtan Temple Fairs – scheduled for January 25 to 29 – would be cancelled.

This comes as it emerged on Thursday that nine people in the UK are being treated for suspected coronavirus.

Five patients are being treated in Scotland as well as one more in Belfast, Northern Ireland, it has been reported.

A further three — believed to be from England or Wales — are also being tested after feeling unwell.

Officials claim a further five ­people have been checked out and given the all-clear.

Latest figures suggest the number of cases in China has now soared above 800 with other victims hospitalised in Japan, Vietnam, Singapore, Thailand, South Korea and the US.

And with the virus spreading all over the world questions are being asked about how local authorities in Wuhan dealt with the outbreak in recent weeks.

Social media users in the city have blasted authorities on Weibo for waiting weeks to put the metropolis on lockdown.

Xiao, 26, a primary school teacher in Wuhan, told The Guardian: “When I saw the news when I woke up, I felt like I was going to go crazy. This is a little too late now. The government’s measures are not enough.”

Others criticised local authorities on the social media platform Weibo as #PrayforWuhan was trending.

One said: “It’s been a month since the first case was discovered and only now do they think of closing the city? This Wuhan emergency response is a little slow, right???”

Another added: “The government needs to address this. If things become too expensive, people will definitely panic and when people feel unsafe, terrible things happen. Right now people are fighting over supplies, soon they may just be fighting.”

Locals have shared images of their stockpiles of instant noodles and snacks on the social media platform Weibo.

One wrote: “No more going out … so I won’t get sick. Hope Wuhan can get some support soon.”

Unverified video that has been widely circulated online is reportedly showing the chaotic scenes inside a Wuhan hospital.

The video is being circulated on Weibo, microblogging site in China, after it was shared by a woman claiming to be a nurse at a Wuhan hospital.

The woman wrote that staff and patients were “stuck” with the bodies, which are covered by white sheets, because no one is available to take them away. 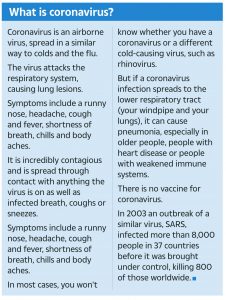 *** BREAKING NEWS ***
Virologists greatest fear may have been realised with the announcement that all 26 Coronavirus victims and all suspected cases have been reported in females.

Dr Ichicov of the Institute of Virology, Moscow said in a statement:
It appears that a very mild form of Man-Flu may have mutated sufficiently to allow it to be contracted by women”