A new cancer treatment implant that slowly releases drugs directly into cancerous tumours has had its first clinical trial in New Zealand and is touted as a major advance in the treatment of prostate cancer.

Initially developed to treat breast cancer, the “Biolen” device has been adapted to treat prostate cancer by delivering slow-release drugs directly into affected prostates which should reduce side effects.

If successful, the device could avoid surgery for some sufferers of prostate cancer. The technology has been produced by Pamela Munster who has tested cancer-fighting drugs for 20 years 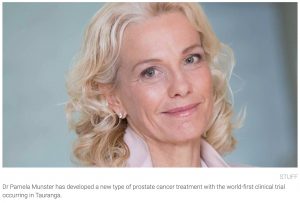 After seeing the side-effects of some drugs she began thinking of better ways to administer drugs and better treat cancer patients.

This led her to found the United States-based company AlessaTherapetuics and develop her potentially game-changing device.

“I wanted to find a way to minimise effects to the whole body by releasing drugs to just the affected area,” she said.

Munster said the procedure was first developed to treat breast cancer and research on how the device can be used in this way will continue.

“The use of technology development or breast cancer treatment continues,” she said.

Tauranga’s Dr Mark Fraundorfer has become the first to treat a patient using the new technology as part of its clinical trial.

“I am honoured to be the first in the world to enrol a patient in this study,” Fraundorfer said. 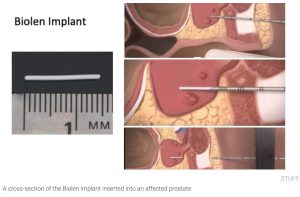 “The introduction of the device delivering bicalutamide selectively to the prostate of my patient with a sizeable tumour was a very straightforward procedure.”

Bay of Plenty District Health Board’s Head of Clinical Campus Professor Peter Gilling is Chairman of the Data and Safety Monitoring Committee for the global clinical study and said the technique could prove a major advance.

“It’s a very promising technology and also a proof of concept for the technique of delivering these drugs straight into the tumour,” Gilling said.

“We use MRI scans to diagnose prostate cancers in our patients. Once identified, using this technology we can administer drugs straight to it, in the form of slow-release pellets. It should open up a whole new way of treating prostate and potentially other cancers.”

Both surgery and radiation treatment can have complications including urinary incontinence and erectile dysfunction.

Munster said she was pleased and excited to know the device she developed in a bid to help cancer patients is one step closer to completion.

“It’s an incredible feeling to know something that started as an idea in a lab is now inside a patient,” she said.