How testing wildlife could stop pandemics in their tracks 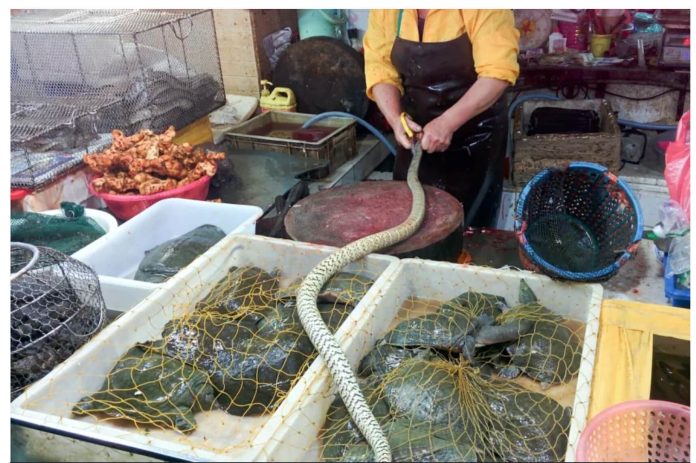 The Chinese virus pandemic has awoken the world to the inextricable connection between environmental, animal and human health, and the persistent risks associated with wildlife markets.

A perfect storm of conditions – packed cages, poor biosecurity, direct human-wildlife contact, a mix of non-endemic wildlife species, and limited health and safety standards – makes the spread of zoonotic disease (disease that is carried from animals to humans) all too likely.

Unfortunately, these circumstances frequently converge in wildlife markets around the world, where animals are kept in inhumane and cramped conditions that actively compromise their immune systems while keeping them in close contact with humans.

Yet, while there is a focus on addressing zoonotic diseases once they have been carried into the human population, we are yet to establish an effective model for disease management in wildlife – and particularly in the wildlife trade – that would prevent this spillover from occurring.

Professor Sharon Lewin, director of the Peter Doherty Institute for Infection and Immunity, says that in recent history zoonotic disease has accounted for a disproportionate number of disease outbreaks.

“HIV came from non-human primates, Ebola came from bats, and H5N1 and H1N1 influenza strains came from birds and pigs respectively. It’s vital that we consider the link between animal and human health and establish measures for preventing the transmission of pathogens from wildlife,” Professor Lewin says.

Viruses and other infectious agents take a disproportionate toll on public health, with zoonotic disease accounting for 60 per cent of emerging infectious disease (EID) outbreaks. More than 70 per cent of these have an origin in wildlife. However, little is done to curb the potential for animal-to-human disease transmission.

A study conducted in southwest China discovered 11 different previously unrecorded coronaviruses among bats in a single cave between 2011 and 2015 and, in the ensuing three years, 1,497 people tested positive for bat coronavirus infections in surrounding districts. As the COVID-19 pandemic has unfolded, we have seen the consequences of not adequately addressing spillover risks of this nature first-hand.

Professor Mark Schipp, Australian Chief Veterinary Officer and president of the World Organisation for Animal Health (OIE) World Assembly notes that we have long recognised the significant risk trade in wildlife poses for zoonotic disease spillover. Unfortunately that risk has been realised most recently with COVID-19.

“These spillover events are not uncommon and each could potentially be another emerging infectious disease outbreak, or even the next pandemic,” he says.

But if we are to address the issue of wildlife-human disease spillover, what is the best model to take?

In research conducted with an international team of colleagues, we have set out steps to significantly reduce this risk.

The wildlife trade – whether for food or financial gain – deals across regions and borders around the world, often outside legal structures. Increased restrictions would likely drive it further underground, making it still more difficult to monitor and assess biosecurity risks. So, an improved model for testing and tracking pathogens with the potential to jump from animals to humans needs to be implemented.

While centralised biosurveillance efforts can be effective, they are expensive and the programs are administered inconsistently, if at all, from one country to the next. In addition, they are often politicised, with governments giving or withdrawing funding at their own whim – take for example, the US government’s withdrawal of funding to the World Health Organization.

And while the greatest risk for emerging infectious disease outbreaks lies in Asia, Africa and Central and South America, laboratories that are equipped with the facilities and capability to conduct disease surveillance are disproportionately located in Europe and North America – 62 per cent of labs are situated on those continents, according to the OIE.

It seems clear, then, that a locally-driven response that doesn’t criminalise participation in testing would address disease spillover risks quickly, efficiently and at the source.

Since the emergence of the H1N1 influenza virus in 2009, affordable, portable technologies that allow for quick, on-the-spot pathogen testing and whole-genome sequencing have been developed. These technologies continue to become smaller, easily portable and more affordable, and we have seen many examples of effective practical training in their use.

Equipping local wildlife and public health professional teams with this technology would allow for a proactive approach to pathogen monitoring in wildlife markets, on farms, and in free-ranging animals – even in remote areas – rather than relying solely on reactive, targeted testing.

The ability to monitor entire pathogen families that have been identified as having an elevated risk of zoonotic spillover would greatly increase our ability to curb the emergence of infectious diseases in humans.

Professor Jodie McVernon, Director of Epidemiology at the Peter Doherty Institute for Infection and Immunity says a central repository of pathogen data, consistently fed and updated by information gathered during screening at a local level, has enormous potential value for modelling and assessing disease outbreaks.

“This, in turn, would expand our ability to proactively predict and prevent emerging infectious diseases and synthesise a more effective global response,” she says.

Finally, we need to establish a recognised global standard for managing wildlife trade that incorporates local pathogen screening, identifies species that present increased risk, and enhances security standards for those species without inciting stigma or fear that might threaten conservation.

This system would smooth the path between those screening the data and those curating it, in order to make starker and more rapid connections between animal and human health. This One Health approach – a philosophy that considers the inextricable nature of human, animal and environmental health – would provide us with earlier warnings and faster global responses to potential and actual spillovers.

In turn, this would inform our wildlife trade policy, allowing for greater protection for at-risk wildlife, while remaining responsive to shifting political landscapes and funding.

Empowering local wildlife and public health professionals with the skills and facilities to implement more exacting wildlife trade and disease surveillance at a local level could greatly reduce the possibility of EIDs, while protecting wildlife welfare and biosecurity and, ultimately, human health.

These decentralised laboratories could then be complemented with a publicly accessible, curated, central system of pathogen monitoring, allowing communities around the world to classify pathogens, identify EID indicators and rapidly alert us to spillover risks, as well as share genomic sequencing data that assists in identifying broad-spectrum antivirals and vaccination targets.

Sweden’s success mocks our folly Alexandra Marshall Sweden matters. It sits there like a thousand-foot skyscraper in the middle of a medieval town, casting awkward shadows...
Read more
Chinese Virus