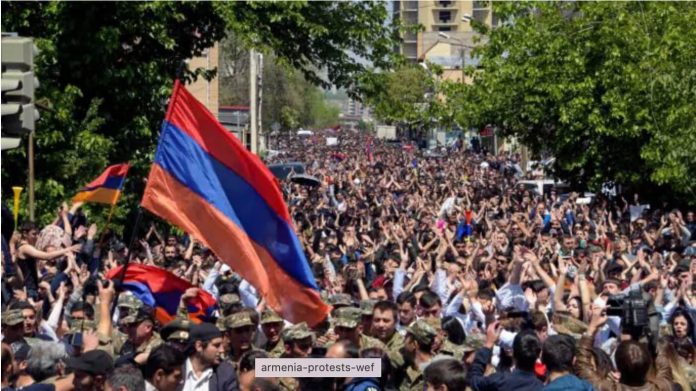 Armenians citizens are rising up in their millions against a ruling class determined to take away their rights. There is chaos in the streets as Armenians, frustrated with the government and its close links to the World Economic Forum, have begun protesting against the authoritarian agenda.

The World Economic Forum has been bragging about “shaping the future of democracy in Armenia” since 2019, one year after the Velvet Revolution in Armenia and the ascension of Nikol Pashinyan, a close Schwab ally, who emerged from political obscurity to be installed as Prime Minister in 2018.

Armenia listened to the World Economic Forum, adopted their agenda, and the nation time traveled to 2030. It looks like ordinary Armenians don’t like living in Agenda 2030. Who could have predicted that?

Now there is anarchy on the streets of capital city Yerevan, and the mainstream media continues to collude with the establishment to cover up the scale of events and suppress the movement.

Pashinyan was the editor of Armenia’s best-selling daily liberal newspaper, The Armenian Times, which has always been highly critical of conservative governments.

Pashinyan’s new liberal government wasted no time partnering with the World Economic Forum and has served a testing ground for some of Schwab’s more adventurous plans for humanity, including a ban on cash.

Eurasia.net reported on Armenia’s move to ban cash in June:

Under a new law all big purchases will have to be made electronically, either through a mobile payment app or via a wire transfer at a bank.

And for now, at least, that will come with a steep fee: Banks charge between 1.5 and 3 percent for the transactions.

The law also prohibits local and central government bodies from making or taking any payments in cash. Some institutions like hospitals, universities, and notaries will go completely cashless. Pensions and salaries will have to be paid via banks – even pawnshop loans, as well. And transactions made illicitly in cash can be annulled.

“Let no one think that we want to complicate people’s lives, on the contrary, we want to simplify people’s lives,” Prime Minister Nikol Pashinyan said in a June 2 cabinet meeting where the bill was discussed. “There are also fiscal and anti-corruption effects here.”

Meanwhile, there have been rolling protests in Yerevan to warn the government against concessions to neighboring Azerbaijan over the long-disputed Nagorno-Karabakh region.

Opposition parties have accused the Prime Minister of treason, accusing him of planning to give away all of Karabakh to Azerbaijan after he told lawmakers last month that the “international community calls on Armenia to scale down demands on Karabakh”.

What are the odds that the “international community” referred to by Pashinyan is actually Klaus Schwab and the WEF?