You Stupid Boy
Home Space Image of The Veil Nebula 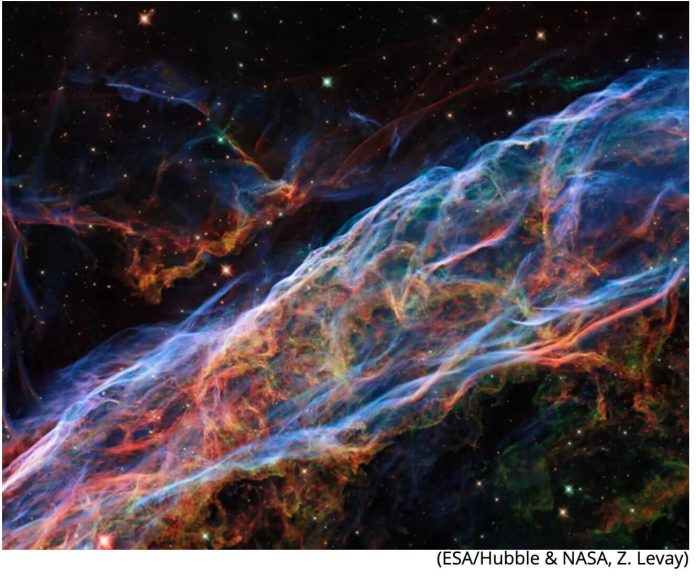 Stars die in fire and fury.

They tremble and shake, erupting their viscera out into space; when the star explodes and the violence is done, a gorgeously glowing cloud of star guts remains.

Such an event is what created the Veil Nebula, a gossamer shred of a larger supernova remnant called the Cygnus Loop created when a star 20 times the mass of the Sun went supernova, about 10,000 years ago.

If you like space photos (and which science-lover doesn’t?), you’ve probably seen it – the Hubble Space Telescope released a spectacular image in 2015, taken with its Wide Field Camera 3 instrument, a rainbow of filaments stretching across the darkness of space.

Now, researchers have reprocessed those data using new techniques, teasing out finer details in the threads of gas.

Located at a distance of around 2,100 light-years away, and spanning a length of around 110 light-years, the Veil Nebula is thought to have been shaped by a powerful stellar wind emitted before the star exploded.

The wind pushed into the gas that had already been ejected by the dying star, hollowing out cavities. When the supernova shock wave pushes into this region, it interacts with the cavity walls, shocking and energizing the gas therein, and creating the complex, filamentous structure of the Veil. 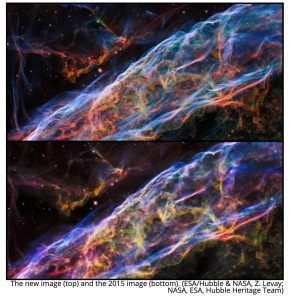 Images like this aren’t just a spectacle – they help astronomers understand these interstellar processes. Here, for instance, different gases emit slightly different wavelengths of light, which have been color-coded – blue for doubly ionized oxygen and red for ionized hydrogen and ionized nitrogen.

The green gases haven’t been disturbed by shock waves as recently as the blue, so they have had time to cool and diffuse into their fluffier chaotic forms.

Because the nebula is still expanding, studying these filaments and their compositions can help us better understand the structure of the cloud, and how the shock wave from the supernova is interacting with it. Such images taken at different times can also be compared against each other to see how fast the shock wave is moving.

Hubble’s 2015 observations were compared with images of the nebula taken in 1997 – see the video above – and scientists were able to calculate that it is expanding at a rate of 1.5 million kilometers (932,000 miles) per hour. Earth’s diameter, for reference, is 12,742 kilometers.

Eventually, the remains of the young, hot star that died in such a dramatic fashion will be all blown away, scattered into the interstellar medium. Even for stars, all things must come to an end.