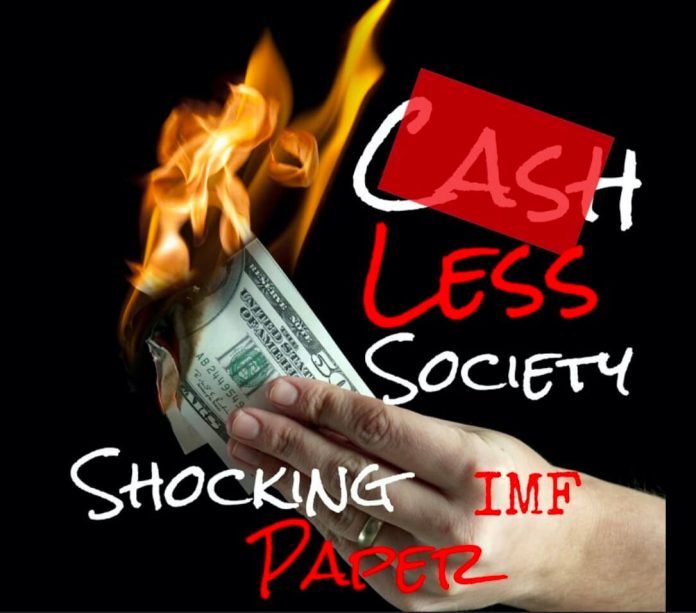 “Breaking Through the Zero Lower Bound” is an October 2015 study published by the International Monetary Fund (IMF). This research paper presents a new central bank tool that would empower central banks to drop interest rates below zero to “stimulate” the economy, but as a side effect will eliminate peoples’ ability to preserve principal via cash. Further, it provides a template on how to quickly and invisibly convert the foundation of the global monetary system from a paper money standard to an electronic money standard; without the need for physically taking cash away from the public, getting government approval, or being restricted by the limitations created by debt ceilings, and they can do this with central banks in full control.

You might be wondering why they would want to do such a thing, or maybe you are thinking that most of your transactions are electronic anyway, so it wouldn’t be a big deal. But think about this, the government wants corporations and individuals to spend money and buy stuff, like stocks, bonds, real estate or anything else, that’s the economic stimulation they talk about, but it isn’t happening. If your bank balance went down daily because of fees, the first thing you would likely do is take your money out of the bank in the form of cash. But if it cost you even more to hold cash, you’re a lot more likely to spend any money that hits your account as quickly as possible rather than watch that principal be eroded by fees…and voila, economic stimulation.

Central banks need new tools to deal with the next crisis. They have experimented with many financial tools but those seem to be losing their power. With 0% interest rates for so long they need to be able to break below zero. However, according to the report “The zero lower bound is a serious obstacle for monetary policy. With Denmark, Sweden, Switzerland, and the Eurozone’s experience in 2014–15, we have already crossed the rubicon of implementing negative rates and have begun to get a better sense of the size and shape of many of the political issues raised by negative interest rates themselves.” In theory, the lower interest rates were supposed to encourage more borrowing and spending, but experience indicates that as negative rates were implemented, it did not encourage banks to lend more, nor were those fees passed through to typical households and therefore, did not “stimulate” the economy.

One obstacle to implementation is that banks fear that negative interest on deposit accounts would prompt bank runs to protect principal as well as encourage more cash transactions. Currently 85% of global transactions are in cash, and 55% are in cash in the US, according to a recent report from MasterCard. So the banks are hesitant to have those figures increase.

The IMF states, “While the complete abolition of paper currency would indeed clear the way for deep negative interest rates …, such proposals remain difficult to implement since they involve a drastic change in the way people transact.”

So what could they do? They propose a transitional system that makes cash transactions more expensive to retail businesses, thus passing those additional costs on to the consumer and inspiring the consumer to choose to use electronic money instead of cash.

The way they can do this is by having central banks charge commercial banks a fee to withdraw or deposit cash and allow those fees to trickle down. But as they’re getting everything in place, they want to put some distance between the new electronic money system and the central bank implementing it. So at first, they propose that banks subsidize any fees charged on cash. Therefore, bank profits are supported and few are aware of the changes. When everything is in place, fees to retailers for cash deposits and withdrawals will be larger than fees on debit or credit cards. The retailer would then choose when and how to pass through fees to their customers. But when it costs more to use cash in transactions, people will most likely volunteer to use debit or credit, and at some point, the transition to an electronic money system will be completed.

Once the policy is installed at the central bank window, they will have the ability to break below zero even before they’ve driven cash out. They would simply keep the cash fee greater than the electronic fee until the transition was completed.

If this system is in fact implemented, I believe what would eventually occur is a hyperinflationary depression. Negative interest rates would be implemented during a crisis, which means that checking and savings accounts would lose principal. Once people start losing principal and discover this will not stop, the most likely outcome would be for them to spend any money that hits their bank account as quickly as possible, which is exactly what happens during hyperinflation, as people attempt to protect their money, but it’s really too late at that point.

I believe this report shows us the next iteration of our monetary system. The question is: is it good for the people? My answer is most definitely no.

What can you do to protect your wealth? What the smart money does for themselves, convert fiat money into physical gold and silver.
Author Lynnette Zang ITM Tradings Chief Market Analyst

Previous articleNew Website For Polling www.hysp.co.nz
Next articleHave Your Say

AT $49.1 TRILLION, THE U.S. STOCK MARKET IS LARGER THAN THE COMBINED GDP OF THE U.S., CHINA, JAPAN AND GERMANY By Pam Martens and Russ Martens   When...
Read more