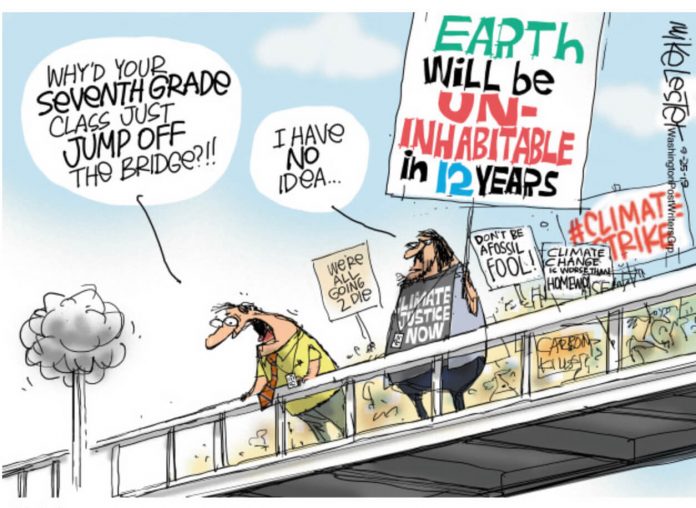 So is he right? Certainly he has a case when it comes to Point One: I think he is correct that the media narrative about climate change is not especially well correlated with the IPCC’s own central assessments. For instance, I think it’s fair to say that the recent floods in London, China and Germany have been held up as examples of a changing climate. But the IPCC’s most recent assessment report, 2014’s AR5, found studies showing evidence for “upward, downward or no trend in the magnitude of floods” (see p214 of the AR5 Physical Science Basis document; be warned it’s a big PDF), and concluded that they were unable to be sure whether, globally, river floods had become more or less likely.

Similarly, I think there is a perception among many commentators and policymakers that storms, hurricanes, and droughts are all more common as a result of climate change, but the IPCC’s own report (see p.53 of AR5) has “low confidence” that those things are more common than they were 100 years ago. I know some scientists think the IPCC is overoptimistic, but it is the closest we have to consensus climate science.

But the IPCC does think extreme daily temperatures have gone up globally (see p53 again). In his chapter on “Hyping the Heat”, Koonin doesn’t mention the IPCC, and the IPCC outranks the CSSR. His detective work is interesting, but he is fighting a henchman, not the end-of-level boss. Maybe the IPCC is wrong as well, but we don’t learn that here.

On Point Two, I don’t feel competent to assess the models; certainly it seems highly plausible to me that there are enormous uncertainties in predicting something as inherently chaotic as the climate, especially when to do so you first have to predict something as inherently chaotic as people. But my non-expert understanding is that broadly speaking the models have been getting it about right.

That said, I think he is right that, if you were to ask the average person in my social circle, you would hear that climate change will lead to catastrophe in the near future. And I think that is overstating what the IPCC reports actually say. For instance, it is true that the IPCC predicts more people will go hungry than otherwise would have: it says that almost 140 million children will be undernourished, in a world where climate change goes unmitigated, compared to 113 million in a world where there is no climate change (see p730 of this IPCC report). But that is still fewer than went hungry in 2000 – almost 150 million, out of a much smaller population. The IPCC predicts that a world with climate change will be worse than one without; but not so much worse that other things, such as economic growth and technological progress, won’t broadly keep the big things, like life expectancy and human health, improving. That does seem worth saying.

And Koonin’s Point Three is worth making too. If India were to increase its per capita emissions to those of Japan, “one of the lowest emitting of the developed countries”, he says, then that change alone would raise global emissions by 25%1. Realistically, we’re not going to be able to stop India — or China, or Brazil, or Mexico, or any of the other middle-income countries — from developing, and development at the moment means carbon.

More importantly: we don’t want them to stop developing. Richer countries have healthier, longer-lived citizens and are better able to cope with a changing climate. Even huge, swinging cuts to Western emissions — politically unrealistic — would only go some way to offset the inevitable growth in the developing world. Those cuts may be worth doing, but there are limits to how much good they can do.

But even if Koonin is right about almost everything — if the best guess of the science is that we’re heading towards things merely getting better more slowly, rather than getting worse — then I think he’s missing a major point. That is, climate change models are uncertain. In fact Koonin claims they’re even more uncertain than we think. So they could easily be erring on the side of optimism.

And the one thing we should have learned from the Covid pandemic is that it’s not enough to say “the most likely outcome is that it’ll be fine, so let’s act as if it’ll be fine.” The correct thing to say is “the most likely outcome is that it’ll be fine, but if there’s a 10% chance that it’ll be completely awful, then we need to prepare for that 10% chance.” Reducing greenhouse gas emissions in the developed world reduces the chance of some unforeseen but plausible disaster: as a happy bonus, it makes our cities more pleasant places in which to live. It will come at some cost, but hopefully not too high, because green technology is getting so cheap and effective these days.

Reviews by climate scientists have been unimpressed. “I would normally ignore a book by a non-climate scientist,” starts one review, which goes on to not ignore it. Another accuses him of cherry-picking his fights (not entirely unfairly, as I said). A third says the book is “distracting, irrelevant, misguided, misleading and unqualified”.

But none that I’ve read really addresses the nitty-gritty of his arguments — which is hard to do in a 900-word review, of course, but still. They usually pick some line out of the first chapter or two, disagree with it, and then say the whole book is therefore rubbish. But I wanted a bit more meat to the objections.

The third review, for instance, quotes Koonin as saying “The warmest temperatures in the US have not risen in the past fifty years,” and then asks “According to what measure?” Well, Koonin tells you the measure, at length: absolute record extreme daily temperatures. Maybe he’s wrong, but he does answer that in the book. (And your next sentence is “Highest annual global averages?” He’s talking about the US! You just quoted that bit!)

Similarly, it complains that Koonin says that the sea is only rising about a foot per century, saying “The trouble is that while seas have risen eight to nine inches since 1880, more than 30 percent of that increase has occurred during the last two decades.” But again: Koonin addresses this, for pretty much an entire chapter. His point is that most of the rest of the rise came during an (unexplained by climate models, according to him) period of rapid warming from 1910 to 1940, before human influence should have been relevant. That, he says, is good evidence that natural variation is driving the current acceleration. Is he right? I don’t know. But the reviewer is not attacking Koonin’s argument at its strongest point.

In fact, none of them seem to: they just want to dismiss the book. They attack Koonin’s credibility and credentials, his temperament. They say he was only hired by the Obama Energy Department because of his contrarian views; they call him a “climate denier”, which seems de trop since he accepts most of the central claims of the climate consensus. The response felt more like a circling of the wagons than a serious effort to counter a serious argument. After all, it is unpleasant to hear reasons why you might be wrong about something: cognitive dissonance is painful.

I started this book confident that climate change is a serious concern, and I finished it only slightly less confident; Koonin has not persuaded me. But I’m glad Unsettled, flawed though it is, has been written. As I said at the beginning, science in a politically charged environment is very hard to assess. Scientists are as prone to groupthink and motivated reasoning as anyone else, and I know very well that there are some who feel they need to keep heterodox views quiet. The reviews, which make so little effort to engage with the substance of the arguments, do not reassure me that climate science is a uniquely groupthink-free discipline.

One thing Koonin suggests is a so-called “Red Teaming” of climate scientists: getting scientists to act as adversarial critics of the existing consensus, a method used by superforecasters, among others, to improve their accuracy by actively hunting out flaws in their reasoning. Science can only progress if assumptions are tested. Red teams in climate institutions — any institutions — seem like a good idea, and I’d support them.

Whether it’s possible or not, of course, is tricky to say. The climate debate is so highly charged, so borderline toxic, that it might be difficult for any climate scientist to take on the red-team role without making their own life more difficult. According to Koonin, one senior climate scientist told him “I agree with pretty much everything you wrote, but I don’t dare say that in public.” The old “in my emails, everyone agrees with me” line is hardly a new one, but it wouldn’t surprise me if there’s a bit of truth in it. 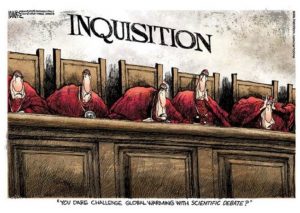 But if the Catholic Church was able to stomach someone advocating for the Devil, then climate science should be able to stomach one doing it for the sceptics. And in the meantime, this book does an acceptable job.