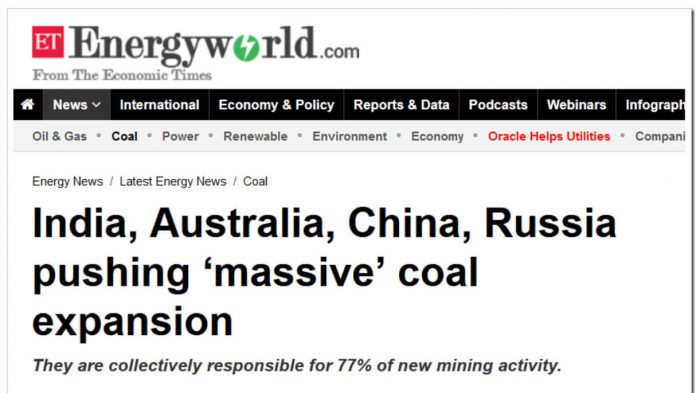 From The Economic Times of India:

Coal producers are actively pursuing 2.2 billion tonnes per annum of new mine projects around the world, a growth of 30 percent from current production levels, a new report from Global Energy Monitor said on Thursday.

The first-of-its-kind analysis surveyed 432 proposed coal projects globally and found a handful of provinces and states in China, Russia, India, and Australia are responsible for 77 percent (1.7 billion tonnes per annum) of new mine activity. If developed, these proposed projects boost supply to over four times the 1.5 degrees Celsius-compliant pathway necessary to meet the goal of the Paris climate agreement.

While three-fourths (1.6 billion tonnes per annum) of proposed coal mine capacity is in the early stages of planning and thus vulnerable to cancellation, the report finds one quarter (0.6 billion tonnes per annum) of proposed mine capacity is already under construction. The prospect of a low-carbon transition and tighter emission policies put these projects at risk of becoming up to $91 billion in stranded assets.

Currently world coal output is around 8 billion tonnes a year, of which the US and EU account for 1 billion. The new capacity implied would therefore cancel out any cutbacks in the latter.

Someone tell the clown car govt that we are the odd one out. Increase our coal, gas and oil exploration and forget about global warming caused by human activity.

Rocket Science Debunks Climate Change Pseudoscience Written by Joseph Postma I would like to draw your attention to an excellent discussion and real-world example of how...
Read more