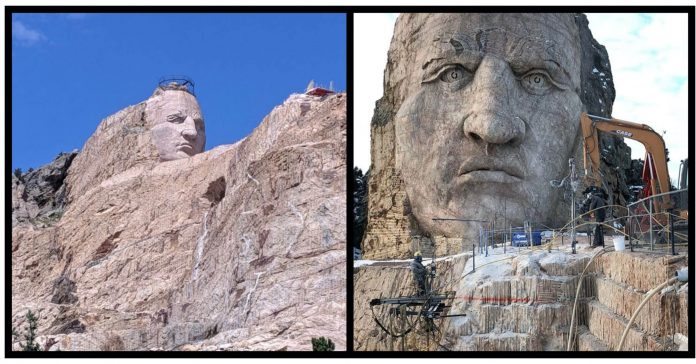 In 1948, Korczak Ziolkowski, started work on his giant sculpture of Crazy Horse, a famous Native American hero, which still remains incomplete to this day.

In the Black Hills region in South Dakota, on what was once called Thunderhead Mountain, stands the unfinished sculpture of the biggest monument in the world, which has also taken the longest to complete, and still remains unfinished.

In 1948, Korczak Ziolkowski, an American citizen of Polish descent, started work on his giant sculpture of Crazy Horse, a famous Native American hero, on the granite peak of Thunderhead Mountain.

Ziolkowski worked on the Mount Rushmore sculptures for a short time and was approached by Chief Henry Standing Bear, a Lakota elder in 1939, after he won first prize for one of his sculptures at the New York World Fair that year.

His first wife divorced him because he was so obsessed with the project but in 1950 he married Ruth Ross who had come to South Dakota two years earlier specifically to volunteer on the project.

The couple had 10 children, seven of whom worked with their father on the colossal project. Ziolkowski was honest about his focus being on the sculpture, telling his wife that she would always come second to it, and his children third.

For extra income, he set up a dairy farm and sawmill while he continued his work on the gigantic sculpture.

During the years he had many broken bones, had four spinal operations and a heart bypass. Although he had estimated the project to be completed in 30 years, Ziolkowki spent his life working on the granite, later with his family.

He never even got to see the completed face of Crazy Horse, completed when he died in 1982, after 34 years of hard, often in extreme conditions.

He was buried at the foot of the monument. His wish was for his family to complete the sculpture and his advice to his wife, “Go slowly, so you do it right.’’

Standing Bear felt there was a need for a Native American memorial in response to Mt Rushmore.

“My fellow chiefs and I would like the white man to know that the red man has great heroes also,” he said.

Ziolkowski was not Standing Bear’s first choice for the project but his first choice, Gutzon Borglum, the sculptor of Mt Rushmore, never responded to his request.

The sculptor had less than $200 to his name when he started work in 1948 and had to contend with no roads, water or electricity.

Working alone during the first years, he used a hazardous 741-step wooden staircase to get to the top of the mountain and refused funding from the federal government, despite having very little money.

The monument has its share of controversy. Some believe it to have become more about the sculptor and his family than the First Nations it is meant to honor.

Tasunke Witko, better known as Crazy Horse, was an Oglala Lakota warrior famous for his role in the defeat of Custer and the Seventh Cavalry at the Battle of Little Bighorn in 1876 and for his refusal to accept the American government’s efforts to confine his people on reservations, despite facing violence and tactical starvation.

According to Tatewin Means, who runs a community-development corporation on the Pine Ridge Reservation, Crazy Horse is revered by the Lakota today because “he never conceded to the white man.”

He was also known for his humility and some people have questioned whether he would have approved of being depicted on such a mammoth scale, at the cost of the mountain’s natural state.

Once completed, the warrior, sitting astride his horse, will point Southeast to where many First Nation people lay buried. Crazy Horse will stand 563ft (171.60m) high and be 641ft (195.38m) long, its height just short of four times that of the Statue of Liberty.

Special events like the Battle of the Little Bighorn are celebrated at the site. Since 2005, visitors have been able to watch laser shows against the mountain as well as dynamite explosions.

The project continues but is slowed down in summer when visitors and electrical storms make work difficult and although most of the sculpting is done in fall and winter the mountain’s high iron content and blizzards slow them down too.

The monument has been visited by tourists for years and now has a 40,000 square foot visitor center with a museum, restaurant, and gift shop, and plans to build a university and medical center.

The Crazy Horse Memorial Foundation brought in $12.5 million in admission and donations during 2018 which lead to some uneasiness about a non-First Nation family profiting from history that is not theirs.

Jim Bradford, a First Nation former state senator, told the New Yorker that the project first felt like a dedication to his people, but now seems more like a business.

“All of a sudden, one non-Indian family has become millionaires of our people,” he said.

The difference between the Crazy Horse project now and how it was originally envisioned has caused friction within the Native American community.