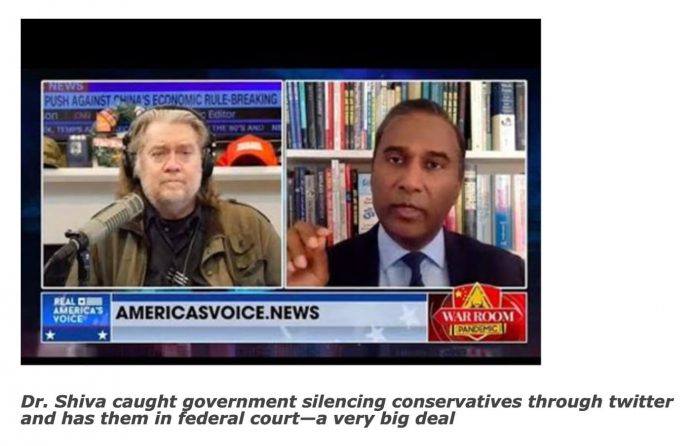 Dr. Ayyadurai Shiva holds four degrees from the Massachusetts Institute of Technology (MIT), including a Ph.D. in biological engineering, and is a Fulbright grant recipient.

He’s also a truth teller on the virus/vaccine, which I suspect caused his being targeted originally.

But his greatest legacy may be bringing Twitter to its knees in federal court for colluding with state and federal officials to silence Conservatives.

Watch him on Steve Bannon’s Warroom and take heart, friends.  This lone Indian has the entire Big Tech cavalry on the run.

Dr. Shiva is not an attorney yet has apparently trounced three Twitter slicksters from Wilmer Hale in a 16 hour hearing in federal court, plus fighting off three more pinstriped sharks from the Government of Massachusetts and yet another legal beagle from The National Association of State Election Directors all by himself.

He announced, “The Government and Twitter work together to suppress political speech, using a special portal,” which Dr. Shiva exposed in court on October 30, 2020.

“They are in what is called a ‘Trusted Twitter Partnership’ where they can report citizens calling out government officials for wrong-doing and silence them via the portal,” said Dr. Shiva.

And here’s the bombshell that could bring the Dorsey Demon to his knees.  “We proved in court that the Government tells Twitter what to do.”

Though running for office, Twitter threw Dr. Shiva—a Conservative—off during his election for simply posting Twitter’s own notices to him.

Originally, Dr. Shiva was only suing the Government of Massachusetts for its part in crushing his right to free speech.

However, on February 4th, 2021, the judge—in what appears to be an unprecedented act—asked Dr. Shiva to bring Twitter into his lawsuit as the government’s co-conspirator—which he did. All parties were present on May 20th and 21st for the 16 hours of hearings.

The judge not only added Twitter as a co-defendant, it further offered Dr. Shiva a Constitutional specialist as attorney, paid for by the court.

And here’s why Dr. Shiva should win

Dr. Shiva remembered seeing the head of Twitter-London reference this playbook and the Twitter partnership in an e-mail from discovery in the case, and searched until he found it.

Lynch is the queen of digital misinformation at the “Defending Digital Democracy Project” which led the push for the mail-in ballot scheme to defeat real democracy.

If my description sounds too ominous for what these operators are up to, let’s look at the opening line on “101: Influence Operations”

This became a handbook for the Democrat Marxist Election officials in 2020.

Combined with Dr. Shiva’s court discovery and testimony about government officials having ‘Trusted Twitter Partnerships’ with a reporting portal to abuse their detractors and have them de-platformed is the smoking gun.

The Playbook tells them how to do it. 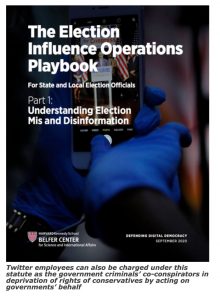 No longer can the liars continue claiming that Twitter is a private company simply acting on its own.  This has crossed into a criminal conspiracy.

Marxist Government officials acting under colour of law across America, deprived Conservatives of their Constitutional Rights, which is a federal crime in my homeland (18 U.S.C. §241) punishable by up to ten years in prison and/or a fine of one million dollars.

Each act is a separate crime under §242 and can be punished separately.

Dr. Shiva has proven in a federal court in the United States that Big Tech acts as a tool of government to suppress free speech of political opponents, opening the door for not only their culpability for these crimes but their dissolution under existing anti-trust laws for such racketeering.

I hope our readers in Britain take note that the government there was using this Twitter portal to suppress free speech and dissent even before the American Marxists picked up on it.

This should be exposed and shouted from the rooftops.  Handled properly, this could bring down Bojo and Sadiq while opening the door for a populist government to Make Britain Great Again.

Hate speech laws translated from legalese: What you need to know From RNZ New hate speech law proposals from the government are a bit confusing, and...
Read more
Freedom of Speech

Say No To Hate Speech.