You Stupid Boy
Home Leftie Stupidity Is the end here for BLM?

Is the end here for BLM? 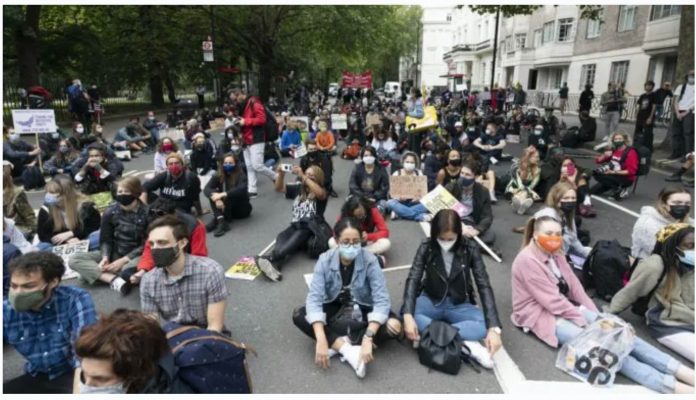 Black Lives Matter activists organized a “Million People March” with the goal of grinding London to a halt and protesting police brutality and so-called systemic racism.

There was just one problem for the BLM organizers. Far from drawing a huge crowd of demonstrators, only a few hundred people bothered to show for the “Million People March,” suggesting mainstream support of the movement is falling through the floor in the wake of continued chaos, violence and destruction across the US.

According to reports, around 300 Black Lives Matter protesters marched through the streets of London on Sunday, blocking traffic outside Notting Hill station by lying down in the road.

The so-called Million People March is protesting against so-called systemic racism and is taking place in lieu of this year’s Notting Hill carnival.

DailyMail report: Protesters chanted ‘whose streets, our streets‘ and ‘this is what democracy looks like’ and held placards as they began moving down to Hyde Park.

Despite organisers urging social distancing and mask wearing for the march today, a number of demonstrators have been pictured close together or not wearing a face covering.

Numbers on the Million People March started at just a few dozen but swelled to around 300 as demonstrators made their way down Bayswater Road.

The march stopped outside Hyde Park and broke into a rendition of Redemption Song by Bob Marley as demonstrators raised their fists.

Sasha Johnson, activist and co-organiser of the Million People March, said she hoped the movement would ’empower the community’.

‘Our message is listen to us, hear our words. We want sustainable and tangible change,’ she said.

‘We don’t just want tokenistic promises, we don’t want it to come from a hegemonic standpoint. We want it to be for the people.’

It comes a day after a mass-gathering of Covid-19 conspiracy theorists who took to the streets of London yesterday to demonstrate against lockdown restrictions and vaccination programmes.

More than 10,000 anti-lockdown protesters who believe coronavirus is a hoax gathered for the ‘Unite for Freedom’ rally which started at noon in the capital on Saturday.

Prior to the bank holiday weekend police said a pan-London operation was in place to keep people safe. The force said they were aware of a number of planned demonstrations and events taking place across London, and have been liaising with the organisers, advising them to carefully consider the Health Protection Regulations regarding gatherings.

Contravening this legislation could result in anyone involved in the holding of a large gathering (over 30 people) being subjected to a fine up to £10,000.

Commander Bas Javid, said: ‘Our approach to policing London during this time has been to engage, explain, encourage and only then enforce, and this will continue across what we believe will be a busy long weekend.

Previous articleAuthoritarianism in Auckland
Next articleHave Your Say