You Stupid Boy
Home US Politics IT’S OVER FOR TRUMP – OR IS IT? 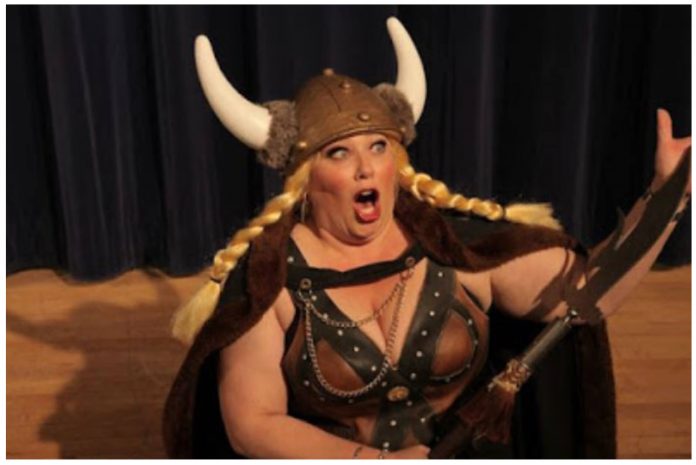 It ain’t over till the fat lady sings.

OK, now Joe Biden is officially ‘President Elect,’ yet Trump is still refusing to concede. He remains President until later this month.

You might expect Trump and his team to be slinking away with their tails between their legs at this stage but that doesn’t seem to be happening.

President Trump’s attorney, Lin Wood, called Mike Pence a traitor many days before Pence proved it, and Lin said that he deserves “execution”.

Strong words – but Pence’s violation of the Constitution on January 6th is hard evidence of treachery – and this doesn’t look like a random act.  It seems like a plot.

So where is President Trump after his Electoral ‘defeat’ in an election he actually won by a landslide?

What does a defeated man do?  Go to bed and cry?  Have his first (ever) drink of Scotch, maybe and give up?  “Well, I did my best,” and drop his chin?

I don’t know what to tell you, because this man left after the 3 a.m. steal by his own shameless Vice President in Congress yesterday and saddled up Air Force One for a quick ride down to Texas – Abilene, TX to be exact.

What is in Abilene, Texas you ask?

The National Defense Command Center – that’s what’s in Abilene, Texas. Trump’s attorney, Lin Wood, just sent out a tweet (before being shut down) as to what may be going on down there.

“So while congress is on capitol hill committing treason surrounded by the military who is ‘helping them’ by Pence’s orders; Trump’s in Texas at the command center watching…..

“You think if the military didn’t have his back he would be there? or escaped Washington on AF1?”

“Sect. of Defense is playing Pence and Congress; waiting for them to finish the crime.”

Wood also appears to be making accusations against Pence ‘using’ young boys. That is not the sort of thing an attorney normally does. Let’s hope he can prove it. 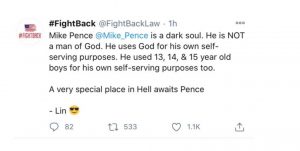 And pictures of Mike Pence in feminine attire as a younger man, being very ‘intimate’ with young boys surfaced today – and Lin Wood posted them, along with this tweet.

“And what was up with that completely different phrasing leading in to the Electoral College count?”

Going back multiple administrations, there’s nothing like Pence’s preface in history.

Notice the difference for yourself: 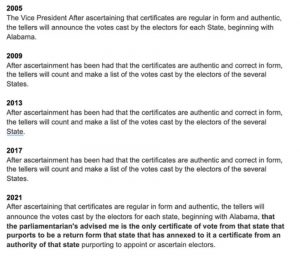 What Pence did was completely wrong under the Constitution because only the legislatures have the power to:

I literally wrote the book on this (two, in fact).

So, Pence, who’s always banging on about how religious he is, broke two of the Ten Commandments in one paragraph.  He bore false witness and helped America’s enemies steal an election for the CCP’s guy – lying and stealing.

Lin Wood’s most interesting post came on Parler (he and the President have both been temporarily suspended from Twitter).

It came in just a few hours ago:

“Many traitors will be arrested & jailed over the next several days.

Why is he so optimistic? Does he know something we don’t, or is he completely unhinged? We will find out in the next few days.

And just one more note of hope…

I listened to an interview (since removed from YouTube unfortunately) by Alex Jones with Gen. Michael Flynn. He is one of President Trump’s most trusted allies who is back on the team after being pardoned of false crimes fabricated by the Obama FBI and DOJ.

That’s zero doubt for those reading this.

(We are trying to find another link to that interview)

Flynn is the one man who knows more than anyone about Trump’s strategy regarding the traitors, both foreign and domestic, who stole the election, and he states that same day that he has total confidence that Trump will be in the White House for four more years.

Then, when Trump was asked last night if he were conceding, he answered he would never ‘concede’ a fraudulent election – he only promised to have ‘an orderly transition’, which by all counts appears to be to himself – with a new Vice President.

According to the guys closest to Trump, his current VP, Mike Pence, may be spending time with his co-conspirators in the Caribbean – Guantanamo Bay to be exact.

So, it looks like the throw down has begun in earnest

We have no intention of giving false hope, but the actions of the President, his attorney, and his most trusted are not those of people who have given up.

They appear like the actions of people who played the long game until they could sweep up the entire Swamp with one net – and send them on vacation for a long, long time.

And thanks to Monkey Werks, we know that some rather strange vacation trips have already begun.  Monkey (MilSpecOpsMonkey) tracks military flights on the east coast and is a legend.

Former ops combat guy, he knows his stuff, and has tracked 1,600 military flights to Guantanamo Bay (Gitmo) since November 9th, which started less than a week after the stolen election.

This chart shows the many trips by just five military aircraft to some interesting places – mainly Gitmo – so perhaps the party has already begun. 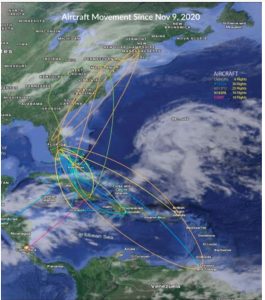 There are rumours that someone tried to kill the president last night. His own party, his staff, and his Vice President betrayed him thrice before the cock crowed this morning, and rather than hunker down or punt – he’s gone to Texas and is playing offence.

I don’t care if this were a Stalin, Mao, or Muzzie, I’d have to give him kudos for stones – very large stones.

Strangely, the Biden ‘transition team’ just ordered their own inauguration cancelled and took down the stands for all 10 or 12 attendees who might attend such an event.

Don’t take ‘hope’ from this (my complaint inbox is already full) but don’t give up either.

Because we’re not dealing with a regular guy here.  We’re talking about Donald J. Trump – a billionaire named in 89 rap songs, who also won 80 million votes in a rigged American election for president.

And if you were one of those who bet against him in Vegas…ask yourself why you didn’t get paid yet, even after the Electoral College show on the 6th claiming Sleepy Joe Biden won?

I’m not a gambler, but I know bookies never pay until the game is over, like life insurance guys don’t pay until there’s a stiff and a coroner’s receipt.

Let’s talk after Vegas pays out the billions bet against Donald Trump, but until that happens, keep your powder dry.

Previous articleHave Your Say
Next articleBig Tech at it again