It’s time to put up or shut up 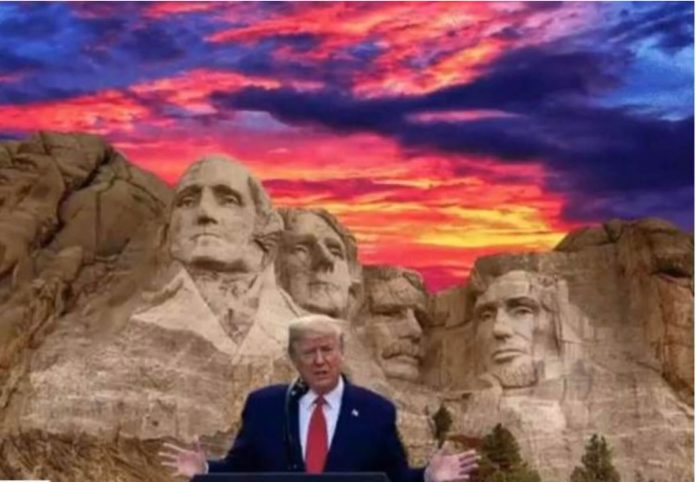 One of the greatest 24 hour periods in US history has arrived.

The United States, born in 1776, is now 245 years old.  In over more than two centuries of history, perhaps no period is of of greater consequence than the next 24 hour period that lies ahead.

The US endured Valley Forge where Washington’s soldiers starved and froze in their efforts to win the war against the powerful British military.  These men could have quit, but they carried on in the hope of a better future for their families and freedom for all.

The country endured the War of 1812 and addressed the glaring issue of slavery in the Civil War.  April 1865 may have been the most historic month in US history as Lee surrendered to Grant at Appomattox, Lincoln was sworn in for a second term and then later in the month, Lincoln became the first President to be assassinated.

We endured the aftermath of the Civil War and the Spanish American War.  We enjoyed the roaring 20’s and won two world wars.  We survived foreign wars in Korea, Vietnam, Iraq and Afghanistan.

But these 24 hours ahead may be the most important in our country’s history.

Tomorrow the US Congress is to get together to declare a winner of the 2020 Presidential Election.  This election was like no other.

President Trump campaigned hard to win the election.  He’s endured four of the most challenging years any President has ever endured.  Many people ask how did he do it?  Others say only God could have carried him through all this.

Big Media projected stories on him daily which we now know better reflect the other side.  Big Tech censors the President and his followers, of which there are many.  The Democrats slander him daily and use every vehicle at their discretion to attack him, his family and followers.

President Donald J. Trump went through a fraudulent special counsel, an unconstitutional impeachment and a virus that initiated in China.  In spite of all this, the US markets have never been higher after the President’s initiatives were put in place.  Americans love him for his strength and perseverance in seemingly insurmountable situations.

Then came the 2020 election.  President Trump way outpaced his opponent in rallies and attendance at rallies.  It seemed at times like the President’s opponent, Joe Biden didn’t care.  No one attended his rallies and no one watched them in the media.  The two campaigns were polar opposites. 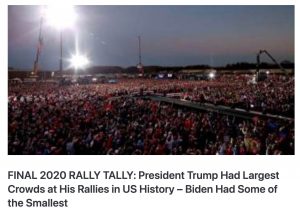 Then came the 2020 election and the shocking results.  President Trump’s results weren’t shocking, Biden’s were.

The President set the record for the most votes ever, crushing Obama’s record of 69 million in 2008 with over 74 million votes.  The President won everything.  But then late at night, after everyone had gone to sleep on Election night, numerous states suddenly flipped to the Biden column.

We’ve all seen the most corrupt and criminal election in world history.  The results remind innocent bystanders of the elections in communist countries.  The fix was in.  The election was rigged.  No wonder Democrats didn’t worry about attendance at Biden rallies or his rapidly declining cognitive abilities.

Big Media, Big Tech, the Democrats and foreign entities all colluded in their effort to overcome President Trump’s historic results.  The fraud has been spectacular and the results shocking.

Our country is facing its most challenging situation maybe ever over the next 24 hours.  Soon we will know what to do next.