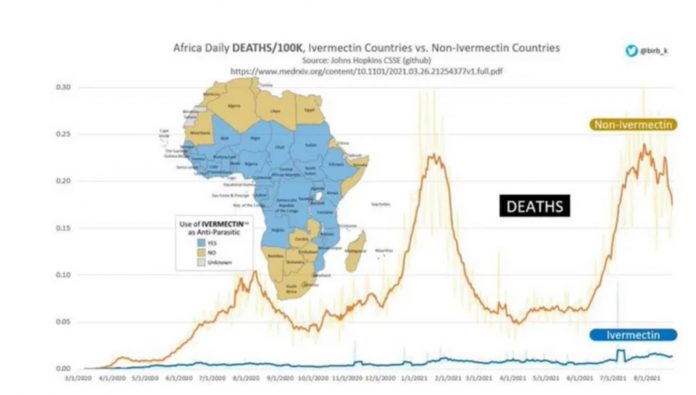 We have all heard the stories of ivermectin saving thousands of souls around the world every day, and countless more from debilitation and disfigurement by the dreaded Covid.

One of the earliest stories was of an aged-care home in Paris that was treating an outbreak of scabies in March, 2020 by dosing all the inmates and staff with ivermectin. None of the facility’s staff or inmates died when the angel of death by Covid passed over, though five percent of the population of 45 similar facilities died in that first wave. That would be proof enough for anybody who wanted to save lives.

From a single aged-care home to whole continents, the evidence for ivermectin’s efficacy continues to build: 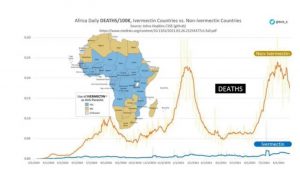 In the graphic above, the blue area shows the countries of Africa that distribute ivermectin once or twice a year for the control of parasites. The brown area is the countries that don’t. The brown line is the daily deaths from Covid per one hundred thousand people in those countries. The blue line is the same for the blue area — which is enjoying a far, far lower Covid death rate. A lot of the poor and backward countries of South America, Africa and Asia have now approved ivermectin for Covid.

Doubtless our Therapeutic Goods Administration (TGA) would like to join them and stop Australia’s death, suffering and expense from the way the virus is currently handled in this country. But the National Covid-19 Clinical Evidence Taskforce is ‘concerned of harms’ from using ivermectin.

Hold on a moment, the TGA has already approved ivermectin for use in Australia against scabies. … As part of the approval process, the TGA does a safety assessment and here it is. We can read it to find out just how dangerous ivermectin is and why it must be kept from the Australian population. Spoiler alert — it is hard to suicide on ivermectin, really hard. …

In a trial on human volunteers, doses of 60, 90, and 120 mg were included to establish a significant safety margin for administration of this drug. No central nervous system effects, using pupil size as the parameter, were detected at the maximum dose level. No adverse events were reported in subjects who received 120 mg of ivermectin, which is 10 times the proposed dose of 0.2 mg/kg for treatment of scabies. There was minimal accumulation following multiple dosing (three times per week) with ivermectin, which was consistent with the half-life in the body of about one day.

A safety margin of ten times the recommended dose sounds good, but it gets better. During a program for treating children with scabies in the Solomon Islands, an 8 mg/kg accidental overdose (40 times the recommended dose) in a child caused acute emesis, mydriasis and sedation which rapidly reversed. In a study of poisoning due to ivermectin and the related molecule avermectin, “Seven patients manifested severe symptoms, such as coma (7), aspiration with respiratory failure (4), and hypotension (3), after a mean ingestion of 100.7 mg/kg avermectin (15.4 mg/kg for ivermectin and 114.9 mg/kg for abamectin). One of the seven patients died, the other six recovered. This was from an average of 500 times the recommended dose rate.

The safety data is summarised in the above graph. Humans that take no more than ten times the prescribed dose at a time will be fine.

If the TGA is going to approve ivermectin for the virus, it might as well approve it for cancer at the same time because some encourageing preclinical data has emerged. For example, in a mice study there was a more than 50% reduction in tumour volumes after ivermectin treatment. To date ivermectin has shown responses from human acute myeloblastic leukemia, glioblastoma, breast and colon carcinoma. … With no side effects, every cancer patient could be on it no matter what else they are on.

The spike protein, whether by covid or a vaccine, ages us. The need for the TGA to approve ivermectin for the virus is great. We need to avoid, or at least minimize, having the spike protein in our bodies. A recent French paper found that each bout of Covid ages us biologically by an average of three years:

If people get re-infected each year and lose three years of their biological life each time, they will be in nursing homes and dementia wards in no time at all.

And the vaccines have proved to be ineffective at stopping transmission. One of the most vaccinated countries on the planet, Israel, has seen daily infections go to a new high:

While the case fatality rate has hardly shifted:

Previous articleHave Your Say
Next articleThe Triumph of Evil