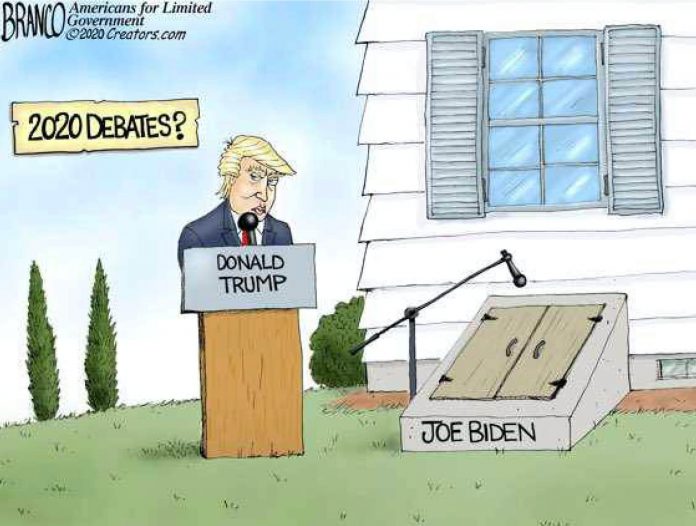 US Politics
Share
Facebook
Twitter
Pinterest
WhatsApp
When Biden actually agrees to an interview or offers to take questions, most reporters simply ask leading, softball questions or merely state something for Biden to nod in agreement with.
By Jordan Davidson

Democratic presidential nominee Joe Biden doesn’t face the same scrutiny the media applies to President Trump. Whether it is due to gaffes, his inability to complete some sentences, or lack of knowledge on a subject, Biden has proven that interviews are not for him and the media has covered accordingly.

When Biden actually agrees to an interview or offers to take questions, most reporters simply ask leading, softball questions or merely state something for Biden to nod in agreement with. Many times, Biden refuses to take questions altogether.

If Biden ever decides to take questions from the press again, here’s a list of questions reporters wouldn’t dare ask him and his campaign for fear of risking their esteemed reputations as some of the loudest voices for Democrats.

Given its outsized role in the numbers of virus deaths in America, should there be a federal investigation into why New York patients were forced into nursing homes by Gov. Andrew Cuomo’s policy directive?

Why do you perpetually fail to take questions from reporters at your minimal number of press conferences?

Does your administration have any plans to address the censorship by big tech companies of conservative media and voices?

VP pick Kamala Harris said she believed the women who accused you of sexual assault, but Biden denied their allegations. Has Harris changed her position on supporting potential victims of sexual assault?

Why is Harris bailing out rioters, including those who are suspected of shooting at police, murdering a friend, and a convicted sex offender?

On Rioting And Violence

Will you ever directly condemn Antifa and the Black Lives Matter rioters as the cause for the violence ripping through the nation’s cities?

Would you allow the National Guard into cities like Portland that have seen 100 days of violence, rioting, and even death?

What, if anything, can be done to stop the epidemic of violence in Chicago and other cities? Have their Democrat leaders failed the citizens there?

You have repeatedly claimed that you moved into opposition against the Iraq War, which you championed as chair of the Senate Foreign Relations Committee, soon after it began. Yet in 2003 and 2004 you didn’t utter a word of criticism of the war –it took until 2005 for you to change your stance. In July 2003 you called your vote the right vote then, and the right vote today. Why are you lying about your record on Iraq? How do you justify previously supporting and enabling the Iraq War? What effect will that have on your foreign policy agenda if you are elected president? How can we trust you will not lead us into another similar war in the future?

If elected, how do you plan on addressing the rising threat of China concerning intellectual property theft as well as their human rights violations?

Secretary of Defense Robert Gates was recently asked whether he would reconsider his remark that you have been wrong about nearly every major foreign policy and national security decision of the past 40 years. He declined. You can’t both be right. Why is he wrong?

You have publicly supported China’s one-child policy. According to numerous eyewitness reports and documentaries, this policy has forced women to be held down against their will, screaming, while their children were yanked from their wombs and ripped apart. Please explain how you can support this policy, as well as its American counterpart in abortion on demand, while still saying it is Donald Trump who is a morally unfit leader.

In 2013 you suggested that people, especially women, acquire a shotgun for self-defense over an AR-15 because ARs are “harder to aim, harder to use.” Have you ever shot an AR?

You have expressed interest in banning the AR-15, but would you be in favor of banning all semiautomatic rifles? If not, why not?

How would such bans be enforced given the popularity of such guns? Who would compel American citizens to hand them over — the police?

You recently praised NBA players for “moral leadership” and “using their platform for good” but have not acknowledged that they violated their contracts to protest the shooting of a man with an outstanding warrant accused of sexually and physically assaulting his ex-girlfriend. What are your thoughts on the morality of physical and sexual assault?

Data shows childhood development is dramatically harmed by online learning, but children have very little likelihood of harm from the coronavirus. Why would you force them to learn online?

Democrats claim they want more women in the workforce and more women advancing into high-level positions. How does forcing women to stay home to homeschool their children accomplish this goal?

The current data shows that working women have been disproportionately hurt in their careers and incomes by coronavirus shutdowns. How can you support such shutdowns and say you are pro-woman?

The speaker of the House was recently seen violating local COVID-19 mandates to get her hair done without a mask at a San Francisco salon. Other Democratic leaders have also violated COVID-19 regulations to keep their comfort. What are your thoughts on leaders who don’t follow the rules that they create, encourage, and condemn others for not following?

House Speaker Nancy Pelosi said she doesn’t believe you should participate in debates with President Trump, accusing him of trying to “undermine the elections” and disrespecting “the democratic process.” Do you believe that participating in debates where you can each share your opinions free of regulation or limitation violates these concepts?

On The Economy And Taxes

Would your plan to increase taxes hurt the economy’s recovery after the COVID-19 crisis?

You promised on the campaign trail in 2008 that the Obama-Biden administration would never raise taxes on anyone making under $250,000 a year. Virtually every fact-checker including the left-leaning PolitiFact says you broke that promise. Why should we believe you when you now promise that no household making under 400,000 a year will get a tax hike?

The trustees for the nation’s entitlement programs say they are insolvent and will begin lacking the funds to pay out their obligations within just a few years. How do you propose to fix this problem?

Your answers to many problems are raising taxes “on the wealthy.” The nation’s top 10 percent reported a cumulative income of nearly $5 trillion in 2016. That’s every penny they earned in that year. It is enough to fund the federal government for one year currently, with a bit of change. How is it mathematically possible to pay for additional tens of trillions of dollars in federal spending without either literally enslaving the rich or raising taxes dramatically on everyone — especially when we already have more than $100 trillion in unfunded liabilities for existing programs?

You reversed your long-held position to say you’re now in favor of taxpayer funding for abortions. What changed your mind about funding abortions?

How do you reconcile your Catholic faith and teachings with your pro-abortion stance?

Democrats in states like New York have passed laws effectively allowing abortions up until birth. Should taxpayers fund such abortions, particularly for poor women who can’t afford them?

Campaigning in South Carolina, you suggested that it would be a good thing for the United States to help fund abortions for women in poor countries to discourage overpopulation. Do you plan to use taxpayer dollars in this effort, and if so, what countries do you plan to target?

You have publicly stated that climate change is a national and global emergency. Does its urgency outpace the coronavirus? If so, would shutting down the entire nation indefinitely be justified to also address climate change?

You and your campaign website have repeatedly warned of “increasingly intense hurricanes” and natural disasters due to climate change. According to NYT bestselling author and climate activist Michael Shellenberger, “hurricanes aren’t increasing in frequency,” and data shows that “deaths from natural disasters are at their lowest point in 120 years.” Why is your campaign making inaccurate claims about climate, and do you plan to correct them?

What if anything did you say to encourage the surveillance of Donald Trump’s campaign and associates before you departed the White House in 2009?

What is your plan to prosecute the corruption found inside the FBI, CIA, and Department of Justice’s top leadership to frame a Republican presidential candidate for treason?

Is Ted Wheeler a good mayor?

Is Lori Lightfoot a good mayor?

Is Andrew Cuomo a good governor?

Please explain to me how it is non-racist to tell black people they’re not black if they don’t vote Democrat.

Is the United States a fundamentally racist nation? Is it institutionally racist?

Do you regret saying that Mitt Romney and Paul Ryan intended to put black people “back in chains” in 2012?

On the Obama Administration

What did you know, and when did you know it, about the Obama administration’s weaponization of secret spy powers to undermine an election and illegally surveil Democrats’ political enemies?

Do you believe American taxpayers should pay the expenses of foreign citizens who illegally enter the United States, such as for food, health care, and education? Since the entire world has a lower standard of living than Americans do, why will that not encourage everyone who can to get inside our borders?

Should there be any criteria applied to those who seek U.S. citizenship? If so, what?