You Stupid Boy
Home Chinese Virus Kick them out 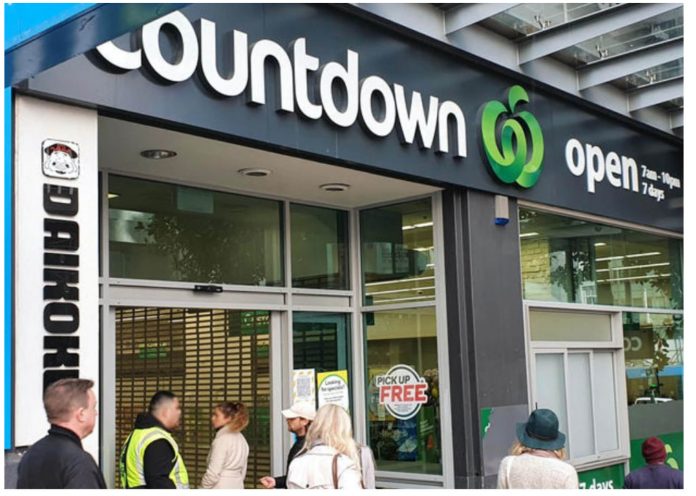 Hipkins said the 32-year-old man, who arrived from India on July 3, left his managed isolation last night to go to the Countdown supermarket on Victoria Street in Auckland city.

The man was outside the facility for 70 minutes.

Hipkins said after CCTV footage was viewed and the man was interviewed, the current assessment of the risk to the public was low.

“The person wore a mask although indicated that was removed for short periods of time,” he said.

In a statement, Countdown said the supermarket closed for cleaning at 8.15 this morning and will reopen tomorrow.

The company said it was “incredibly disappointed that this has happened given the potential for an incident like this to put our team and customers at risk”.

‘Self isolating as precaution’
“We have asked all of our team that were working last night, including the nightfill team, to self isolate as a precautionary measure. They will get tested over the next few days and we are offering them any and all support they need.”

Officials do not know what the man purchased from the supermarket.

Hipkins said all covid-19 facilities were on standby and people needing a test would have no problems getting one.

Individuals within these facilities need to “play by the rules”, he said.

“These are acts of selfishness and we intend to use the full weight of the law.

“My understanding is he left through a smoking area where the fences were being replaced,” Hipkins said.

Air Commodore Darryn Webb, head of Managed Isolation and Quarantine, said the smoking policy – as well as the security policy – will be looked at.

Webb said there was a guard outside Stamford Plaza when the man left.

The security guard watched the man leave but wasn’t sure if the man leaving was a contractor, Webb said.

“They don’t have the powers of police to apprehend…clearly it’s about communicating…if it’s logical that they take chase then that’s what they do.

“It certainly looks like it was a spur of the moment idea,” Webb said.

CCTV footage showed that no one else had left Stamford Plaza, Webb said.

Hipkins said the hotel was a managed isolation facility, not a “maximum security prison”.

Police called immediately
In a full statement, Webb confirmed that the man will be charged.

“Around 6.50pm the man escaped through a fenced area at the Stamford Plaza when he was out smoking, as a section of external fencing was being replaced. Security attempted to follow the man but were unsuccessful in locating him.

“Police were called immediately, and enquiries were underway to locate the man including reviewing CCTV footage and undertaking substantial area searches, before he returned to the facility where he was then interviewed by police.”

The man walked to the supermarket on foot and purchased items at a self-service checkout, before returning to the hotel about 8pm.

“Once the man’s movements were established, police visited the supermarket and ensured the self-service checkout and the areas entered by the man were cleaned.

“CCTV footage from within the supermarket has confirmed there was no close contact between the man and any staff or customers during his time there.”

‘Actions completely unacceptable’
Police are looking at other CCTV footage to figure out the man’s movements in the Auckland CBD.

“The actions of this man are completely unacceptable. Returnees are given clear instructions and information about what their responsibilities are. Managed isolation is a critical part in our defence against covid-19, and it is up to each and every person entering this country to play their part.

“We take any breach of the covid-19 rules very seriously. Wilfully leaving our facilities will not be tolerated, and the appropriate action will be taken.”

The fencing in place at all managed isolation facilities is being replaced with 6 feet-high fences.

No wonder Cindy passed over the chance to front this. She must have known more about this than what we do.

What are we not being told? If the shit hits the fan and we have to go back to level 1 lockdown, I can see the public being well and truely pissed off and ignore any demands from Cindy. Her family of 5 million would be so pissed that it could cost them the election.