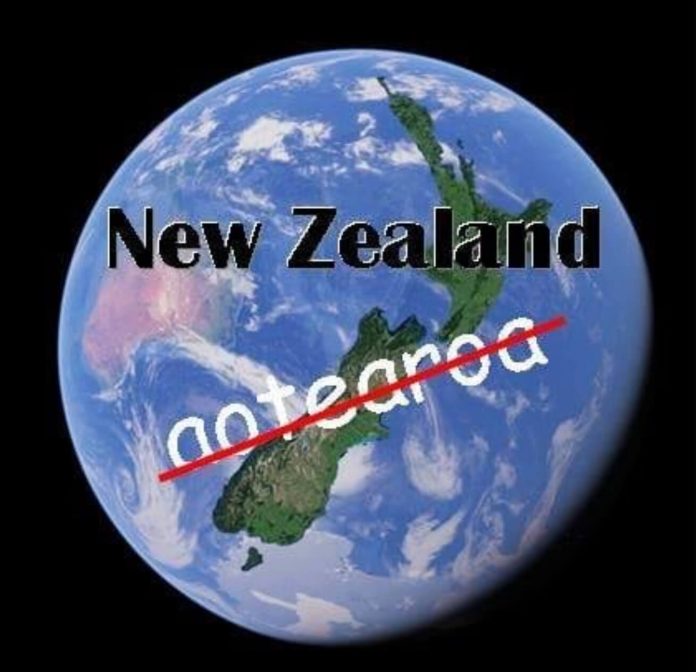 NZ Common Sense
Share
Facebook
Twitter
Pinterest
WhatsApp
AOTEAROA WAS NOT THE MAORI NAME FOR NZ – IT WAS MADE UP BY AN ENGLISHMAN
Can we stop this changing of our country’s name by stealth, please?!!! We had a referendum on the flag. Surely our country’s name is even more important!
Dame Naida Glavish said on TV in June 2020: “It was Aotearoa before a foreign sailor came along here.” It was not. She doesn’t know her history! It was not mentioned in the Treaty either because it hadn’t been invented then.
Abel Tasman ( Dutch) landed here in 1642 to get water… he didn’t stay long ‘cos four of his men were killed by Maori, writing later that they left “since we could not hope to enter into friendly relations with these people, or to be able to get water or refreshments here.”
However, in 1643 the States-General (Parliament) of Holland named New Zealand, (Nieuwe Zeeland). So… we have had this name for 377 years and even the English didn’t see fit to change it. There was no Maori name for NZ because Maori did not see themselves as a nation, just tribes, nor did they have a written language. ( Before anyone jumps up and down and takes offence I am merely stating a fact… nothing derogatory is implied!).
In 1890 a pakeha bod, Stephenson Percy Smith made up a name for New Zealand, Aotearoa, to go with his fictional tale of Kupe. He was an ethnologist. He was born in Suffolk in 1840 and grew up on a Taranaki farm from 1850. He wrote the theory of the Great Fleet. He was a founder of the Polynesian Society and worked with the Māori scholar Hoani Te Whatahoro Jury.
******************************
In the 1844 “A Dictionary of the Maori Language” by Herbert Williams, which is the most comprehensive book of the New Zealand language there has ever been, the word Aotearoa is not in it. The word Aotea appears as follows:
Aotea, n. 1. A species of thistle, Kia awhitia koe ki te patiti ki te taru aotea e tu ki te ngahere (Wa. 1, 51). Note.—The expression taru aotea occurs in M. 291, apparently with another meaning.
It was not in the 1957 version either:
https://nzetc.victoria.ac.nz/…/tei-WillDict-t1-body-d1…
****************************
Michael King, who wrote what is widely recognised as New Zealand’s most complete history book, “The Penguin History of New Zealand”, wrote:
“In fact in the pre-European era, Maori had no name for the country as a whole. Polynesian ancestors came from motu or islands and it was to islands that they gave names.”
********************************
Image courtesy of Derek Bowman.

Previous articleI Wonder Why?
Next articleoraf.nz

From Eurokiwi WE HAVE FORGOTTEN This ANZAC Day 2022 let us be aware that all the brave soldiers who died to protect our freedom sacrificed...
Read more
NZ Common Sense

Ladies, We Told You So