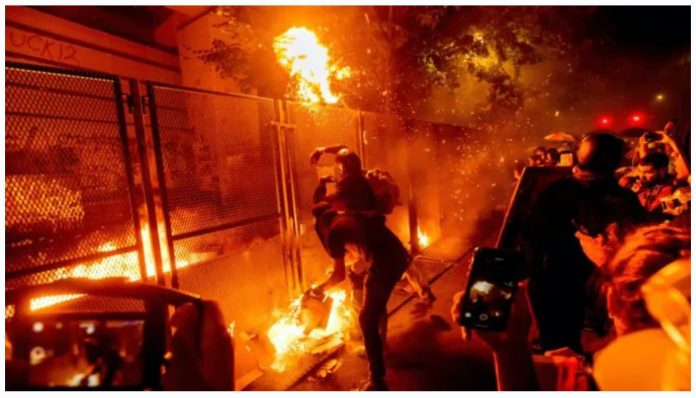 Portland’s leftist city officials have revealed the Democrat-controlled city is fining the federal government $500 every 15 minutes for building what they call an “unauthorized fence” around its courthouse to protect it from rioters intent on destruction.

Could there be a more fitting metaphor for the state of Democrat-controlled cities in America in this summer of leftist violence and destruction?

The White House said it will agree to draw down the presence of troops if the state stepped up its own enforcement, an anonymous senior White House official told AP Tuesday.

The news came as Portland announced its own action against the deployment of troops by fining the federal government until it removes a fence around the Mark O. Hatfield courthouse, which has been targeted by rioters throwing IEDs.

DailyMail reports: The talks between the White House and Oregon come a day after the U.S. Marshals Service and Department of Homeland Security were weighing whether to send in more agents.

The marshals were taking steps to identify up to 100 additional personnel who could go in case they were needed to relieve or supplement the deputy marshals who work in Oregon, spokesman Drew Wade said.

The tension between Portland and federal troops deployed by President Donald Trump intensified on Tuesday, with Portland Commissioner Chloe Eudaly announcing fines on the fence that was set up without permission.

Eudaly said the government hasn’t responded to a cease and desist demand on behalf of the city sent last week and said the bill against the federal government is now $192,000 ‘and counting’ as of Monday night.

‘We intend to collect,‘ she said.

‘Typically, we would send a maintenance crew or contractor to remove such an obstruction, but I will not send workers into harm’s way,’ she said.

‘Yes, I am afraid to direct workers to do their job and enforce our laws against the federal government—I hope that gives everyone reading this pause,’ she added.

According to the transportation bureau’s rules, which Eudaly oversees, it can assess a maximum $500 fine for obstructing the public right of way without a permit and levy a charge every 15 minutes, hourly, daily, weekly or monthly, according to Oregon Live.

The fence has become the heart of evening protests, which have broken out in the city for months following the death of George Floyd at the hands of Minneapolis police officers. Protesters have hit the streets demanding an end to racial injustice and police brutality.

The demonstrations have escalated into violence with protesters throwing rocks, Molotov cocktails, fireworks and laser pointers at the federal courthouse.

Despite the clashes between agents and civilians, Trump has touted their deployment as a success.

‘We, as you know, have done an excellent job of watching over Portland and watching our courthouse where they wanted to burn it down, they’re anarchists, nothing short of anarchist agitators,’ Trump said Tuesday.

‘And we have protected it very powerfully. And if we didn’t go there, I will tell you, you wouldn’t have a courthouse. You’d have a billion-dollar burned-out building.’

Previous articleHave Your Say
Next articleMatt Who?