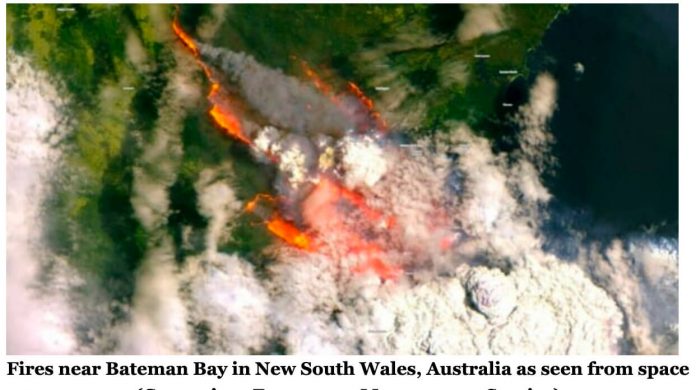 A Muslim teen who was accused along with his brother of starting a fire in Australia was seen laughing as he left court in Sydney on Tuesday.

Fadi Zraika and his brother Abraham, both 18, allegedly set off fireworks that started a grass fire at a park in Guildford, near Sydney, on Dec. 22, the Daily Telegraph reported.

On Monday, the New South Wales police force announced it had charged 24 people with deliberately starting catastrophic fires that have ravaged many parts of the country. The blazes are so widespread they can be seen from space.

The Daily Telegraph said police were called to the park about 2:40 p.m. after reports of several loud explosions were followed by small grass fires that spread rapidly in sudden winds.

The fires were put out by the Rural Fire Service.

In 2018, the ISIS-linked Al-Ansar Media claimed wildfires in California were retribution for America’s participation in the civil war in Syria.

WND reported in 2013 that William Scott, a former National Security Agency official, said terrorists had been using fire as a tactical weapon.

Scott said at the time that after U.S. Navy SEALs killed al-Qaida chief Osama bin Laden, they “captured a treasure trove of material that provided some unprecedented insight into the al-Qaida plans. And one of those was a detailed campaign for starting fires throughout the [American] West.”

In 2012, al-Qaida called on its followers to set forest fires in the United States. In its magazine Inspire, the terrorist organization presented instructions for the creation and ignition of “ember bombs.”

In 2003, an FBI memo warned that a senior al-Qaida detainee told interrogators he planned to spark multiple, catastrophic wildfires simultaneously in Colorado, Montana, Utah and Wyoming to strike a blow to the U.S. economy.

Who would have thought it would come down to this. What better way to destroy the aussie economy than to burn it.

And then I read this

Miranda Devine, The Sunday Telegraph
.
WHENEVER a major bushfire catastrophe occurs in Australia, the victims are essentially told to shut up.
.

“Now is not the time for that conversation,” says the Tasmanian Minister for Emergency Management, David O’Byrne, avoiding questions about why adequate hazard reduction burns were not done in cooler months to remove fuel from the path of inevitable summer fires.

But the residents of Dunalley, whose town was overrun, and the farmers whose properties and livestock have been wiped out, want that conversation right now.

Now is the time for farmers to complain that they could never get a permit to burn off excessive ground fuel on their properties.

Now, while public attention is focused, and before the truth can be buried for years.

Now is the time to point out, perhaps, that a fire which begins in a national park carrying negligently heavy loads of ground fuel can become an unstoppable inferno which will eventually burst out into the Canberra suburbs and kill four people and consume 500 homes.

Now is the time for people who understand the bush to tell the rest of Australia what fools we are.

Greenies who oppose such burnoffs, “care more about birds and wildlife than they do about people and farms,” he said.

“But what’s the point of that now when the hills and trees they told me I couldn’t burn off, because there were protected eagles and swift parrots there, are now all burned and the fire it created was so hot we had dead swans dropping out of the sky?”

No, the only permissible comment on a bushfire catastrophe is to say it was caused by “climate change” – that convenient get-out-of-jail free card for greenies, governments and the obstructive bureaucracies they jointly create.

But we’ve heard it all before, and we’re not buying it.

“It’s really simple,” says Brian Williams, captain of the Kurrajong Heights bushfire brigade, a veteran of 44 years of firefighting, in one of the most extreme fire risk areas of Australia, on a ridge surrounded by 0.75 million hectares of overgrown national park between the Blue Mountains and Wollemi.

Green tape and heavy-handed bureaucracy has made his job harder today than in 28 years as captain. Rather than needing six people to perform a controlled burn in the cooler months, now 40 are involved, to oversee biodiversity and so on.

Williams managed to conduct just two of the five hazard reduction burns he planned before this fire season.

But don’t blame greenies. All week they have been claiming they support hazard reduction. Really?

No matter what legalistic and linguistic ploys are now used to rewrite history, green hostility to proper bushfire management is on the record, from the light-green NIMBYs who object to smoke, to green lobbyists who infiltrate government decision-making, taxpayer-funded green activists who embed themselves in government agencies, the bureaucratic green tape which makes the job of volunteer firefighters so difficult, the green NGOs who strongarm politicians, right up to the political arm of green ideology, The Greens.

It is true The Greens have developed a new set of “aims” including a caveat-studded “effective and sustainable strategy for fuel-reduction management”.

In practice, on the ground, it amounts to covert opposition. Williams scoffs at the Orwellian sophistry: “They publicly say they support it. The reality of how it pans out is nothing like that. Greens have two faces and underneath they are undermining everything.”

While there have been improvements under a new state government, Williams says hazard reduction is still inadequate across NSW, reaching just 1 per cent rather than the 5 per cent minimum recommended by the Victorian bushfire inquiry.

At least in the hard-won patch of Volunteer Fire Fighter Association president Peter Cannon, around Dubbo, Parkes and Forbes, hazard reduction is complete this year and he is confident any fires will be controllable.

He says it is a credit to hard-working firefighters that Tasmania-scale destruction has not occurred in NSW despite extreme fire conditions.

Another bright spot is the latest Rural Fire Service annual report which says more than 80 per cent of planned hazard reduction was achieved, and the area treated should increase by 45 per cent over three years.

It’s not enough but it’s a welcome change from the dark days of 2003, eight months before the Canberra inferno, when former RFS Commissioner Phil Koperberg told a NSW parliamentary inquiry that widespread hazard reduction was “an exercise in futility”.

Fast forward to last month and blame for that fire has finally been laid where it belongs, at the feet of Koperberg’s RFS and the green-influenced National Parks and Wildlife Service.

Brinadabella farmer Wayne West, whose property was wiped out in the fires, sued the two agencies. Last month in the ACT Supreme Court, Chief Justice Terrence Higgins found them negligent.

The episode demonstrated how green pressure on decision-makers filters down into a cascade of subtle bureaucratic obstructions which disempower firefighters on the ground and disregard their expertise.

The result in 2003 was that a small fire at McIntyre’s Hut in the Brindabella ranges was allowed to rage out of control through the national park to emerge 10 days later, and burn lethally through Canberra’s suburbs.

Unfortunately for West and his insurance company, the government agencies are protected by statute and don’t have to pay compensation.

But West won a moral victory. We all are in his debt because he fought for the truth and refused to shut up.

I guess the greens AND the Muslims are trying to achieve the exact same thing.

Previous articleHave Your Say
Next articleSafety In Numbers?