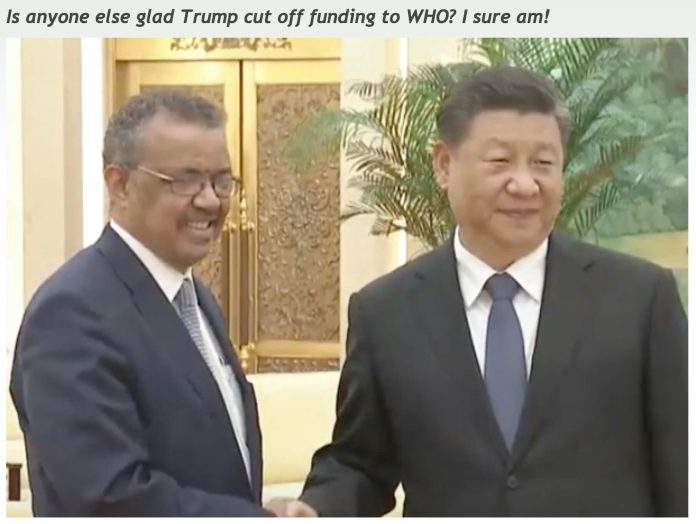 For months the World Health Organization (WHO) insisted that China self-reported the Wuhan coronavirus in December 2019.

Well, just the other day, WHO quietly changed the virus in the timeline on its website.

Guess who did not bring the virus to WHO’s attention? China.

The Country Office notified the International Health Regulations (IHR) focal point in the WHO Western Pacific Regional Office about the Wuhan Municipal Health Commission media statement of the cases and provided a translation of it.

WHO’s Epidemic Intelligence from Open Sources (EIOS) platform also picked up a media report on ProMED (a programme of the International Society for Infectious Diseases) about the same cluster of cases of “pneumonia of unknown cause”, in Wuhan.

Several health authorities from around the world contacted WHO seeking additional information.

So officials only learned about the coronavirus after doctors working in Wuhan posted about the virus on a U.S. website.

WHO even tried to use the obvious lie to shame Taiwan for bringing up the fact that the organization ignored the country’s please for answers on the virus:

Taiwan claims it emailed WHO on Dec. 31 to request information on the outbreak in Wuhan, and asked if the virus could be transmitted between people. Taiwan, which is not a WHO member, alleged that the WHO never replied to their email, which robbed it of valuable time to prepare for the coronavirus outbreak.

In April, the WHO responded to Taiwan’s allegations by saying, “We have asked how they communicated this to us, because we are only aware of that one email that makes no mention of human-to-human transmission, but they haven’t replied.”

“The first report came from Wuhan, from China itself, so Taiwan was only asking for clarification, and as some people were claiming, Taiwan didn’t report any human-to-human transmission; this has to be clear,” WHO Director-General Tedros Adhanom Ghebreyesus said in April. “So, the report first came from China — that’s fact number one — from Wuhan itself.”

To think if WHO actually did its job how much better off everyone would be right now.

The change comes after the Republicans on the House Foreign Affairs Committee released its report Interim Report on Origins of COVID-19 Pandemic.

“I’m glad to see the WHO and the Chinese Communist Party have both read my interim report on the origins of the pandemic and are finally admitting to the world the truth — the CCP never reported the virus outbreak to the WHO in violation of WHO regulations,” McCaul said in a statement to the Washington Examiner. “The question now is whether the CCP will continue their false propaganda campaign that continues to claim they warned the world or whether they will come clean and begin to work with the world health community to get to the bottom of this deadly pandemic.”

Previous articleThe Future of Health is for Maori, by Maori
Next articleHave Your Say

What a Waste of Time and Money

Caught the end of a chat between Ryan Bridge and Peter Williams this AM. They were discussing the upcoming interview at 3 pm with...
Read more
Leftie Stupidity

Will fairy dust power New Zealand? Amy Brooke Wishful thinking, allied to government incompetence and the ambition of our Prime Minister, is lining up trouble ahead....
Read more