Mad Killary Still Mad as Ever 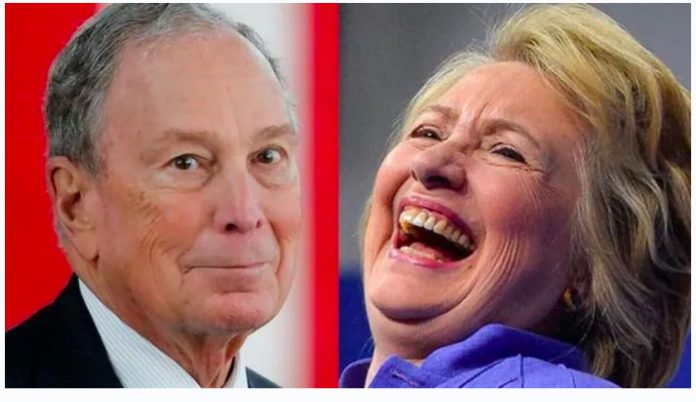 Fmr Clinton Adviser: Hillary, Bloomberg ‘Cooked Up a Scheme’ For Her to Seize Nomination

A former adviser to President Bill Clinton said that Michael Bloomberg and Hillary Clinton have “cooked up a scheme” for her to become the 2020 Democratic nominee even though she’s not in the race.

“Here’s the deal that I think is going down. I think Hillary and Bloomberg have gotten together and cooked up a scheme,” Dick Morris told John Catsimatidis on The Cats Roundtable radio show on Sunday.

Morris said Bloomberg will stay in the race, even after it becomes clear he has no chance of winning, in an effort to get at least enough support to stop Bernie Sanders from running away with the nomination.

“Nobody will be nominated on the first ballot, and it’ll go to a second ballot,” Morris said of a brokered convention. “The problem is that the party establishment doesn’t have a candidate. They can’t do Bloomberg because he got killed in the debate. … Can’t do [Joe] Biden because he’s already lost the front-runner status. … [Pete] Buttigieg looks like a high school kid at the Model UN. … [Elizabeth] Warren is third, but she’s pretty far to the Left, and they’re not going to want to trust her.”

Per Washington Examiner: Morris said Sanders, the current front-runner, would “get massacred by Trump” in the general election and predicted that Clinton, the 2016 nominee, would enter the race on a second ballot at a brokered convention.

“And then Hillary begins to gain; the other candidates begin to drop out. And Hillary is the nominee. That, I think, is the establishment scenario,” he said. “Hillary is the only candidate that they’ll be able to come up with that can measure up to Donald Trump.”

Clinton said in November that she was receiving a number of calls urging her to rethink her decision to sit out of the 2020 race but said it was “absolutely not” in her plans. When asked earlier this month if she would consider being a vice presidential candidate, Clinton reluctantly conceded an openness to the idea.

“I never say never because I do believe in serving my country, but it’s not going to happen,” she said.

The Drudge Report reported last week that Bloomberg was considering Clinton as his running mate, but the former secretary of state said she had no interest.

Going on past events, mini Mike needs to have his security in place. Food tasters, armed guards, anything for protection from an accusation that he “Had Committed Suicide”

Previous articleHave Your Say
Next articleLiarbour Soft On Crime?