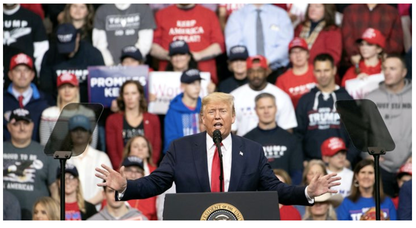 The Return Of MAGA: Trump Sets First Rally In Months For June 19 In Tulsa

President Trump will return to the campaign trail on June 19 with a rally in Tulsa, Okla., for the first time since the coronavirus outbreak forced most of the country into quarantine three months ago, a campaign official said Wednesday, as polls show former Vice President Joseph R. Biden Jr. establishing a significant national lead over Mr. Trump and the president’s approval ratings plummeting…

Trump campaign officials are unlikely to put into place any social distancing measures for rally attendees, or require them to wear masks, people familiar with the decision-making process said, adding that it would be unnecessary because the state is so far along in its reopening.

Mr. Trump has also made it clear he doesn’t want to speak in front of gatherings that look empty because of social distancing, or to look out on a sea of covered faces as he tries to project a positive message about the country returning to normal life and the economy roaring back, even as his top health advisers have warned the pandemic is far from over. “Oh my goodness,” Dr. Anthony S. Fauci, the federal government’s top infectious disease expert, said Tuesday. “Where is it going to end? We’re still at the beginning of it.”

Oklahoma isn’t one of the 21 states where cases of coronavirus are increasing right now. The epidemic there is flat: The transmission rate is slightly below one, as best anyone can tell, and the positivity rate hasn’t increased lately. That’s a better look for the White House than if he’d scheduled his first rally in Texas or Arizona, where things really are deteriorating and an ill-advised mass gathering with minimal social distancing can’t be risked.

But Oklahoma is an odd choice for the simple reason that it’s not in play this fall. It’s safely red. I can sort of understand that as a landing spot under the circumstances: Trump wants a big comeback after not doing rallies for three months and figures a red-state crowd will be extra adoring. But it’s still a strange use of resources given that there are now less than five months until Election Day. Why not go to Florida instead? Their epidemic is momentarily under control too, just like Oklahoma’s.

June 19 is the date black Americans traditionally celebrate emancipation and Tulsa was the site of one of America’s most infamous racial pogroms. The Times mentioned both of those facts in its story about the rally, an early sign that these details will very much be part of the mainstream media framing of the event. It’s an opportunity for Trump potentially, as he could use the occasion to say a few words about both events.

We’ll see if he does.

I think both sides will come away with extra motivation from the rally. For Trump fans it’ll be a treat seeing him back in his element. He’ll be in fine form, no doubt, having waited months for this chance to vent at his enemies to raucous cheers. Maybe he’ll land some meaningful shots on Biden. If nothing else, it’ll be a chance to remind the country of that surprisingly optimistic jobs report from last week.

Democrats will be sitting back hoping that he riffs on something they can use against him. Maybe it’ll be no more significant than him accusing the old man in Buffalo of being an Antifa super-soldier. But we’re probably destined for an impassioned defense of police at a moment when both parties in Congress are working on reform bills to limit abuses like the one perpetrated on George Floyd. If they’re really lucky he’ll go off on a rant about how we need to protect the Confederate names of our military bases, the Confederate flags at our NASCAR events, and the Confederate statues in the U.S. Capitol. That’ll be a fine gloss on Juneteenth in Tulsa.

The most interesting reactions, though, will come from Anthony Fauci and Deborah Birx. They’ll have to be tactful in their criticism, as they always are, but there’s no way they’ll be able to condone Trump holding this event. His campaign people know they’re going to take heat for it and are already preemptively rebutting the charges:

“Where we go we will make sure it is safe to hold a rally and what safety precautions we put in place. We will talk about when we know exactly what kind of venue that it is that we are talking about,” Trump campaign communications director Tim Murtaugh told Fox during an interview on Wednesday. “But I would point out to the national media that I don’t remember them doing any social distancing shaming when they were doing all the coverage of the demonstrations that were going on.”

He’s right about the double standard for the protests but (a) the protests at least had the virtue of being held outdoors, with the crowd usually in motion, and (b) some rando at a protest has less influence over public behavior than the president of the United States does. The question will inevitably be asked of Fauci, Birx, and every other expert afterward: If Trump can hold rallies, why can’t we go to baseball or basketball games? The obvious answer is “Because Trump is grossly irresponsible about social distancing and doesn’t care if his supporters get each other sick.”

It’s okay for BLM to hold rallies, ignoring all these social distancing warnings, But as soon as Trump does it, it’s bad.

Previous article100 days to freedom from tyranny
Next articleHave Your Say