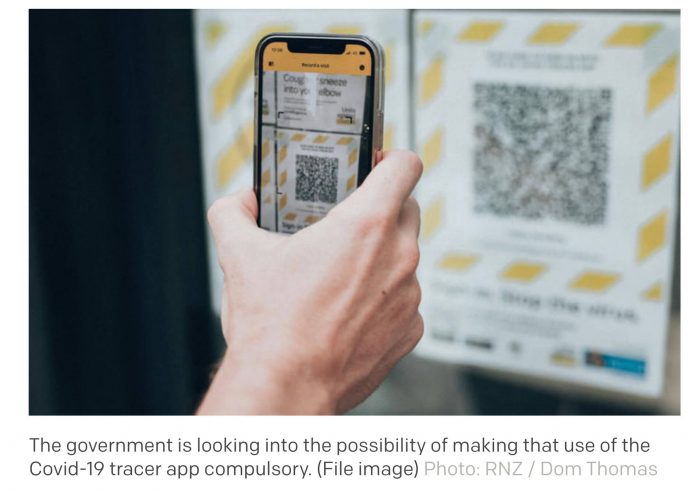 A tech expert is warning the government could face multiple stumbling blocks if it makes QR code scanning mandatory – in particular when dealing with tech giants like Apple and Google.

Covid-19 Response Minister Chris Hipkins has commissioned a report which will look into the possibility of mandating the use of the NZ Covid Tracer app.

University of Auckland research fellow at Koi Tū centre for informed futures Andrew Chen said there were three main points to consider in making the app mandatory – the first being it was not enforceable.

“There could be an argument there for an unenforced mandate,” he said.

Dr Chen said the next problem could be digital exclusion.

“There are still about 20 percent of New Zealand adults who cannot use the app even if they wanted to, so there would have to be digital inclusion policies alongside any decisions to make it mandatory.”

However, the most important barrier would be working with Apple and Google, he said.

“Apple and Google have rules that say if you want to use our exposure notification framework or our Bluetooth system, you have to make it voluntary and opt in, you can’t force people to participate.

He explained that was because the two companies dealt with much more oppressive countries than New Zealand and they wouldn’t want to set a precedent.

Come back in six months and say that. You will be very surprised at how much we have deteriorated to 3rd world country status

He said at that point the government would need to calculate whether more would be gained from compulsory scanning, than what would be lost by having the Bluetooth system turned off.