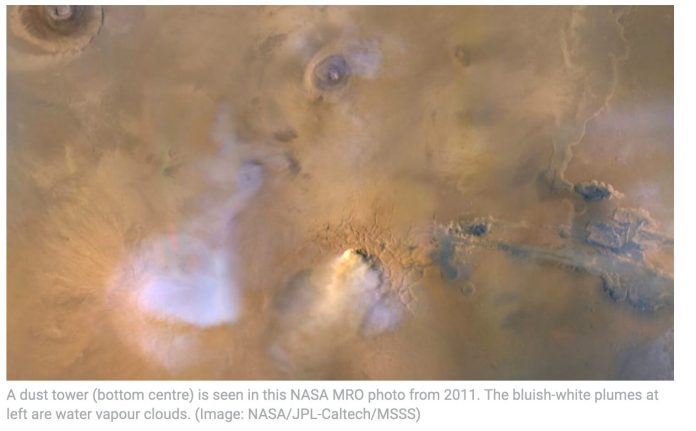 Sprawling towers of dust can reach heights of 80 kilometres during global-scale dust storms on Mars, according to new research. Acting like a space elevator, the phenomenon might explain how water escaped from the Red Planet during its ancient past.

On Earth, storms tend to be highly localised events, but things are a bit different on Mars. About once a decade, Mars experiences a colossal dust storm that impacts the planet on a global scale. Known as planet-encircling dust events (PEDEs), these storms affect the planet’s weather for months at a time. Such a storm occurred in 2018—a massive global dust storm that enveloped the entire planet, casting it in a dull yellowish haze and putting an end to NASA’s Opportunity rover mission.

Two new research papers (here and here) led by Nicholas Heavens from Hampton University and the Space Sciences Institute looked at an odd meteorological phenomenon that happens during these planet-wide storms: massive towers of dust that rise up into the upper atmosphere, with some columns reaching heights of around 80 kilometres. The new papers, published in the Journal of the Atmospheric Sciences and JGR Planets, are providing new insights into these enigmatic dust towers and how they possibly contributed to water loss on Mars.

Heavens and his colleagues studied a pair of PEDEs, one from 2007 and the one from last year, to learn more about these dust towers, by looking at data collected by NASA’s Mars Reconnaissance Orbiter (MRO). This satellite is equipped with a specially designed instrument, the heat-sensing Mars Climate Sounder, that can penetrate through thick blankets of dust. The scientists also looked at images of the dust towers taken by the orbiter’s Mars Context Imager (MARCI).

As the research shows, the dust towers are denser and more concentrated than the usual clouds of dust that exists in the Martian atmosphere, and they also climb much higher. These gigantic, churning columns can occur when conditions are normal on Mars, but more of them form during PEDEs, according to the new research.These towers start on the surface as areas of rapidly ascending dust, some as wide as the state of Rhode Island. Sunlight warms these clouds of dust, causing the plumes to waft upwards into the Martian sky, in a process similar to how heat from condensing water vapour fuels thunderstorms on Earth. At heights of around 80 kilometres, the towers can swell to sizes around the width of Nevada. During the disintegration phase, “it can form a layer of dust 56 kilometres above the surface that can be wider than the continental United States,” according to a NASA press release.Unlike the storm observed in 2007, in which the dust towers lasted for around a day or two, the 2018 PEDE produced dust towers that lasted for nearly four weeks.

That’s significant, because water vapour that’s trapped in the dust is coming along for the ride—some of which may actually be leaking into space. These dust towers could be acting as a transportation system for other materials and gases, including H2O vapour. Back in 2007, scientists observed that water molecules were being delivered to Mars’s upper atmosphere, and at heights where solar radiation causes the water molecules to break apart and waft into space. This is very possibly a clue as to how Mars lost all its water, which was once awash in lakes and rivers.

Looking ahead, the researchers would like to learn more about the dust towers and how they formed, and their possible role in removing water from Mars’ atmosphere.