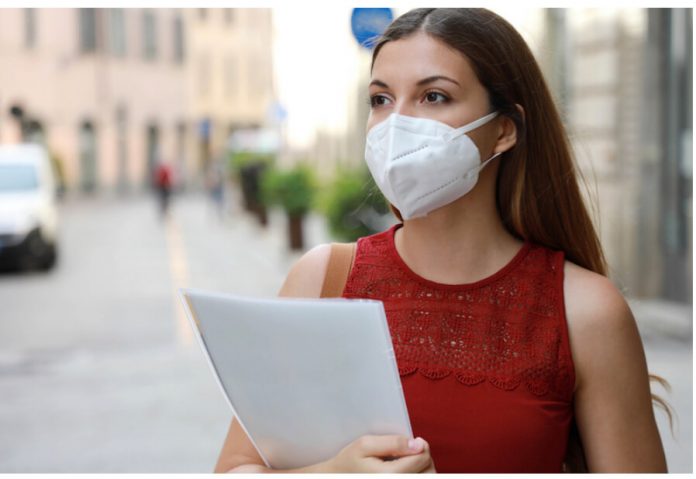 Masks do not work to protect anyone from SARS-CoV-2. It’s all based on sloppy science. We asked the senior author of the Bangladesh mask study to defend his study.

The CDC just decided to continue the transportation mask mandate for another two weeks. Dr. Bob Wachter, Chair of the Department of Medicine at UCSF, concurs with the CDC decision. This doesn’t prove that masks work. Instead, it proves that the CDC, Wachter, and most mainstream scientists (who claim masks work) are incapable of differentiating solid science from a sloppy study.

There have been only two randomized trials to test whether public policy using masks to mitigate the spread of SARS-CoV-2 can reduce the spread.

The first one, in Denmark, failed to show that masks made a difference. However, they were forced to re-write their paper to claim masks worked in order to get their study published.

This is known as “scientific corruption to match the political narrative.”

But the second one, in Bangladesh, claimed that masks worked.

Nature called it a “rigorous study” and Stanford and Yale promoted it as definitive in a press release.

But was it really? We challenged Yale Professor Jason Abaluck, the first author of that study, to defend their study. To his credit (and our utter amazement), he agreed but with one condition: we were only allowed one person to challenge him (because that’s how science works of course). We instantly agreed.

The discussion happened on April 3, 2022. The result: Abaluck failed. Badly. Very badly. One of our experts who viewed the interview said that it was worse than just sloppy work. He wrote, “This is bordering on fraud.”

In short, the Bangladesh mask study again failed to prove that masks make a difference. It was all statistical noise.

For example, here’s the graph for purple cloth masks. If masks worked, it would be highly unlikely for these curves to be on top of each other. For some strange reason, graphs such as these were omitted from the paper. Can you guess why???

Yes, it’s because the study was designed to fit the narrative. Subgroup analysis that goes against the narrative is not shown in the paper. That would cause people to ask questions.

You can see the entire 2-hour Abaluck discussion yourself and make your own judgment. You can watch Jason contradict himself multiple times and make appeals to authority.

I also include a link to my interview with statistician Mike Deskevich on his interpretation of the Abaluck discussion. In the video, Mike clearly explains why the study shows no effect and he does it in just a few charts. You don’t need to know much about statistics to see what is going on.

Initially, Professor Abaluck was so self-confident he thought he could run circles around us. He was wrong. The truth won.

So now Abaluck has changed his tune. He now says he won’t talk to us anymore or answer any more questions.

The bottom line is this: there is no rock on Earth that is large enough for study authors to hide under. The use of masks to slow the spread of SARS-CoV-2 has been debunked.

Masks don’t work. There is a reason these studies failed to find an effect: it’s because there is no measurable effect. Our team has said this from the beginning.

In fact, even Fauci agrees masks don’t work. Watch this video starting at 29 seconds into it where he admits it might make people feel better and it might block a “droplet or two.”

Science today is not about transparency. It is about finding creative ways to adjust your study to please your funders and then to avoid being challenged by hiding from people who seek to challenge your work. This is why I can’t get a debate on vaccine safety and efficacy with any of the members of the FDA or CDC committees, for example.

This interview with Abaluck shows that when we do get a chance to challenge mainstream beliefs, we win. So far, we’ve only been given a single “at bat” opportunity. We are now 1-0.

So now you know why we can’t find any authority who wants to debate our team on any of our points: they know they will lose. So they make up excuses to avoid being challenged like that we are misinformed, lack credentials, or that they don’t have time for such silliness as defending their study.

This is also why there is such an intense focus on censoring, de-platforming, gaslighting and discrediting us: because they don’t want their bad science to be exposed.

As any of my readers can attest, I have been trying since May 25, 2021 to get anyone from the other side to challenge me and a few of my team members to discuss whether I am spreading misinformation or the truth.

Thus far, I have been unable to get anyone to take any of my offers, even with million dollar incentives. Here are some of my offers:

So I was overjoyed recently when I finally got a qualified person willing to challenge on a recorded video our assertion that all public mask policies deploying cloth, surgical, and N95 masks are nonsensical and not justified by science.

Finally, for the very first time, the world will get to see a discussion between the two sides on a key issue: Do masks work?

The Two Randomized Studies On Masks And SARS-CoV-2

There have only been two randomized trials testing the hypothesis that masks can reduce the spread of COVID.

The first one, in Denmark, was negative. Masks made no difference. But in order to get the study published, they had to change the science to match the narrative. This was all well documented in the BMJ, one of the few honest journals left. I note that nobody disputes this.

The second one, in Bangladesh, claimed masks are effective. It is the study that all the “experts” seized upon. “See, masks work!!”

Lots Of People Had Issues With The Bangladesh Study

El gato malo and UC Berkeley Professor Ben Recht were two of the first people to point out the flaws in the Bangladesh mask study. Then our team independently verified Recht’s work. See Masks don’t work and skip down to the section entitled, “Supporting evidence that the Bangladesh study showed masks don’t work” for all the articles analyzing the study.

In other words, it was clear to the critical thinkers in the room that there was no detectable benefit at all.

But Professor Abaluck said that we got it wrong. And to our utter amazement, he agreed to defend his study in an interactive discussion.

We could not believe it!!!!

A first author who is willing to engage our team and defend his study!?!? That has never happened before. Never! Normally these people run for the hills when we call on them. Could we have made a mistake? We thought about it for a few seconds… nah, no way.

There was one big condition: Jason would only agree to engage with us one person at a time.

To make it a “fair” exchange, we picked someone on our team (James Lyons-Weiler) who was completely unfamiliar with the study and we gave him a week to read the study and prepare.

So the discussion is between:

The Two Hour Discussion Between Professor Jason Abaluck And JLW

Guess what happened? Yeah. Professor Abaluck lost. Big time. You can watch the 2-hour video here or if you are short on time, just read all the comments.

It got even worse. When Professor Abaluck realized he lost, he basically said, “Stop with the questions!” If this isn’t a tacit admission that his study is deeply flawed, I don’t know what is.

Professor Abaluck basically doesn’t want to talk to us anymore because we ask hard questions and point out serious flaws in his study. And we caught him contradicting himself multiple times in this short 2-hour conversation. One of our experts from the UK (a very famous math professor) viewed the video and was appalled. He wrote to me, “This is bordering on fraud.”

If anyone with any serious academic credentials thinks the Bangladesh mask study and the video discussion proves that masks work, I’d be willing to pay you $100K to show us we got it wrong (you only get the money if you can convince any of our team members on the call).

Of course, nobody will take us up on the offer because they know every person we discredit like this just makes the case for masks even worse.

Here’s James’ Substack article on my interview with Mike: Who Won The Bangladesh Study “Debate”? You Decide

It shows very clearly with just a few charts that the study is all noise and any signal is smaller than the noise.

You don’t need to be a statistician to be able to understand this.

Vinay Prasad On The Bangladesh Study And The Op-Ed

Here’s Vinay’s video on the Bangladesh study. He didn’t dive as deeply as we did into the study, but he seized on the authors deliberately misrepresenting the results of their study in an influential op-ed they wrote after the study came out.

Nice diverse insights/interviews on this masking study. One thing I would add/clarify.

From the ClinicalTrials.gov registration of the study:

“This study intends to answer the following research questions: …

Can mask wearing reduce COVID-19 seroconversions for the wearer?

Seroconversion is a more meaningful outcome than seroprevalence since it discounts pre-existing seropositivity. No explanation is given in the article for the change to the study.

Note to readers: Seroprevalence means you’ve had COVID sometime in the past. Seroconversion means you got COVID during the study. They promised to look for the more meaningful measure. Yet the study didn’t do this.

Yet Another Covid “Conspiracy Theory” Confirmed As True Written by JD Rucker This isn’t new information to those who have been paying close attention, but the...
Read more
Science