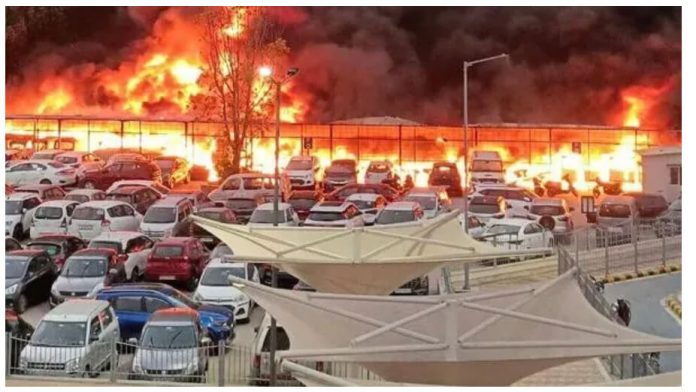 30 new e-rickshaws, 50 old e-rickshaws along with 10 cars, 2 scooters and a motorcycle were left gutted after the fire broke out in the EV parking space early in the morning on Wednesday, June 8th. A call was sent out to the Delhi Fire Department at 5 in the morning following which 11 fire tenders were rushed to the spot to help bring the fire under control.

The cause of the fire which saw nearly 100 vehicles gutted is yet to be ascertained, it is believed that it could have been caused by a short circuit. Many vehicles were left unrecognizable by the effects of the massive fire that evoked scenes out of the worst nightmares from hell, no one was injured or killed in the incident.

The fire in Delhi is perhaps the biggest EV related fire to have been reported in the country. While the fire thankfully did not claim any lives, the inferno did end up charring many vehicles many of the e-rickshaws. The inferno which is now thankfully under control could have become a whole lot worse had it not been for the quick response of the Delhi Fire Department considering the number of vehicles that were parked in the area.

While the cause of the fire hasn’t been confirmed yet, the fact that it broke out in an EV parking area is just more bad news for India’s growing electric vehicle market. Over the past 2 to 3 months, reports have been trickling in about electric scooters catching fire which unlike today’s incident have also led to unfortunate losses of lives.

The national government has been cracking down on electric vehicle manufacturers whose scooters have been catching fire. After a spate of fires in electric scooters, the central government ordered the Defence Research & Development Organisation (DRDO) to investigate the incidents.

The results of the investigation by the DRDO’s Centre for Fire, Explosive and Environment Safety (CFEES) blamed bad battery design and serious defects in batteries and EV modules for the spate of fires related to electric vehicles. Based on the reports of the investigation, the government ordered Ola, Okinawa and Pure EV to give their take on the incidents before it takes appropriate action on these matters.

So what should you do in case your electrical vehicle catches fire? Well, the first thing you should do is not dump water on the fire, especially if it is the battery pack that has caught fire. Using water to extinguish a lithium-ion battery fire will cause the release of hydrogen gas, which is highly explosive and will only increase the intensity of the inferno.

Instead, first, call the fire brigade and if you have a powder style fire extinguisher that is rated for electrical fires make use of it as soon as possible. If the fire becomes too intense, step away and wait for the professionals to do their job. Remember, your life is more important than material things. Also, remember to document the incident if you can and report it to the authorities so that you can at least get the insurance people to foot the bill.

Considering the recent spate in EV related fires, it is high time that the Indian Government took action and drafted proper rules to ensure that all EVs keep to a certain standard which in turn will keep people safe.

China & Rare Earth Metals China once played an insignificant role in the global rare earth elements industry. However, through the country’s recognition of the...
Read more
Chinese Virus