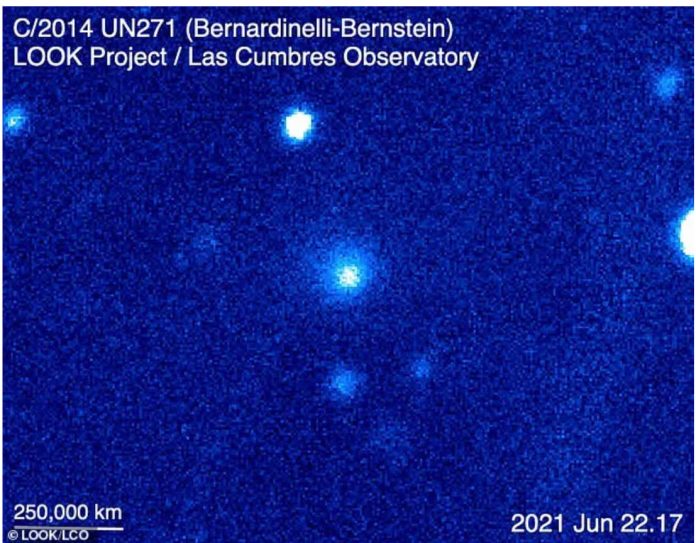 Astronomers in New Zealand have spotted the first activity on the mega comet C/2014 UN271, perhaps the most massive comet discovered in recorded history.

The experts saw signs of a coma, a zone of spreading of gas and dust, spreading on June 22, marking the first time they had seen it as an active comet since it was first spotted by the Dark Energy Survey.

The image (above) shows C/2014 UN271 at a distance of roughly 19 astronomical units (AU) from the sun. One AU is roughly 93 million miles, or the distance between the Earth and the sun.

The giant object, which measures between 62 and 230 miles wide and is almost the size of a small dwarf planet, could be roughly 1,000 times the size of a normal comet.

It may also be the most massive comet found in recorded history, though some have pointed out that Comet Sarabat, which is more than 513,000 miles wide, is larger.

The image was taken by the Las Cumbres Observatory (LCO) 1-meter telescopes hosted at the South African Astronomical Observatory were available on June 23 at midnight EDT (0400 GMT).

‘Since we’re a team-based all around the world, it just happened that it was my afternoon, while the other folks were asleep,‘ said Dr. Michele Bannister at New Zealand’s University of Canterbury, in a statement. ‘The first image had the comet obscured by a satellite streak and my heart sank. But then the others were clear enough and gosh: there it was, definitely a beautiful little fuzzy dot, not at all crisp like its neighboring stars!‘

However, it will not become naked-eye bright, astronomers say and ‘it will remain a telescopic object because its closest distance to the sun will still be beyond Saturn.‘

Data shows the object traveled seven AU in just the past year, which would put it within 10.9 AU of the sun by 2031.

Citizen astronomer Sam Deen calculates that 2014 UN271 would, at best, be as bright as Pluto in the night sky, but more likely it’ll reach the brightness of Pluto’s moon Charon.

The LCO has created an anticipated viewing schedule of C/2014 UN271, giving its global network of telescopes a ‘rapid response’ of a new event on the comet ‘within 15 minutes of an alert,’ the statement added.

‘There are now a large number of surveys, such as the Zwicky Transient Facility and the upcoming Vera C. Rubin Observatory, that are monitoring parts of the sky every night,‘ Lister said. ‘These surveys can provide alerts if one of the comets changes brightness suddenly and then we can trigger the robotic telescopes of LCO to get us more detailed data and a longer look at the changing comet while the survey moves onto other areas of the sky.‘

Previous articleWhat Is This?
Next articleHave Your Say

Enormous Mysterious ‘Cavity’ Discovered In Space Scientists have discovered an enormous ‘bubble’, or cavity, in space that stretches across almost 500 light-years. The sphere-shaped void is...
Read more
Space

The Future Of The Sun

What will become of our Sun? The first hint of our Sun‘s future was discovered inadvertently in 1764. At that time, Charles Messier was compiling a list of...
Read more