#MeToo Is a Fraudulent Political Weapon 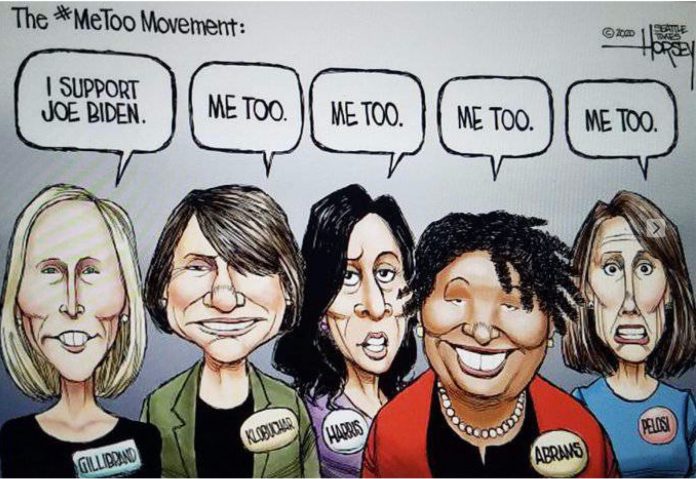 The #MeToo movement has been exposed as the fraudulent political weapon it was always designed to be.

In 2018, Brett Kavanaugh went from being a highly esteemed judge with over 30 years of honorable service to being labeled a “sexual predator” — all without a shred of credible evidence.

It didn’t matter that Christine Blasey Ford’s story had more holes in it than Swiss cheese, or that no one could corroborate her story. Spearheaded by Alyssa Milano, Nancy Pelosi and many other celebrities who call themselves “feminists,” the left was game to destroy Kavanaugh’s family, career, his life of achievements. 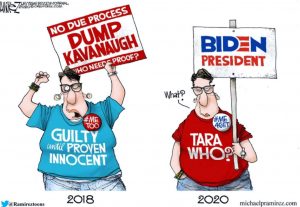 They whipped up their mob of millions storming after him with virtual pitchforks and got the hashtags #MeToo and #BelieveWomen trending for weeks. They staged a dramatic #BelieveSurvivors national walkout day to “show solidarity” with Blasey Ford because, as they repeated ad nauseam, “any woman who has a story of sexual harassment should be believed and heard.”

In September 2018, Milano tweeted, “You can’t pretend to be the party of the American people and then not support a woman who comes forward with her #MeToo story.”

“For a woman to come forward in the glaring lights of focus, nationally, you’ve got to start off with the presumption that at least the essence of what she’s talking about is real,” Joe Biden said at the time.

“Every survivor of sexual assault deserves to be heard, believed, and supported,” Hillary Clinton tweeted in 2015.

Right from the beginning, I have been sounding the alarm about the fraudulent nature of the #MeToo movement and the long-term collateral damage it will carry. I was attacked mercilessly and called the nastiest names in the book by women on the left for doing so (I’m a misogynist, “my mother should have aborted me,” etc.).

Fast-forward a year later, and boy how things suddenly changed for the #MeToo activists.

Enter Tara Reade, who has accused Biden of sexual assault.

And not a peep from feminists and the mainstream media. And even worse, these same figures are expressing outright adoration for Biden and proudly endorsing him. Just like in the case of Juanita Broaddrick, liberals are performing extreme mental gymnastics worthy of Olympic gold medals to somehow justify why “#MeToo doesn’t apply” to Tara Reade.

I can’t sit here in this filth of hypocrisy anymore.

The #MeToo movement is officially obsolete.

When we have women like @Alyssa_Milano leading a pitchfork mob after Kavanaugh or Tony Robbins with ZERO evidence but proudly endorse Joe Biden after dozens of women with evidence have accused him of sexual assault, it’s meaningless.

Sexual assault and domestic violence should not be a left vs. right issue. If anything, this should be an issue that unites us, as genuine abuse doesn’t discriminate and crosses political lines.

But the left turned it into a political weapon.

And who are the real victims of this weapon? Who loses the most?

Not “Republicans.” Not “Democrats.” Real victims of harassment and domestic violence.

Real victims are less likely to be believed now, and they can thank the left for that.

And what about the impact on relationships between men and women?

The left also played another stupid chess move: continually lumping “#AllMen” into one category of would-be rapists and predators. According to the #MeToo crowd, all men are guilty and are to be held responsible for the predatorial actions of some, and thus the onus was put on all men to “do better.”

Everyday Feminism had a gem of an article, one of many in the media that perpetuated this nasty “all men are toxic” narrative.

Well, newsflash: A surefire way to turn good men into bad men is by repeatedly shaming all of them when they’ve done no wrong.

Today, 60 percent of male managers now say they are uncomfortable mentoring, socializing with or working alone with women in the workplace. And 21 percent of men say they are reluctant to even hire women for jobs.

Furthermore, many men and young boys are now reluctant to be in relationships and marriages with women and are worried about being falsely accused of sexual harassment or assault. This may actually be one of the saddest consequences at a time when the marriage rate is alarmingly low and the birth rate in America is at its lowest point in history.

Because the left was so short-sighted on this, trust is broken now between men and women, and wounds have been created that will take a long time to repair.

But long-term societal collateral damage doesn’t matter to leftists so long as they achieve their short-term political goals. Feminists and the left, who are supposedly all about empowering women, have set women back decades.

No more games. No more “accountability and justice” for one side only. We cannot continue as a country like this looking the other way when blatant hypocrisies present themselves.

This moment demands a choice. It’s one or the other: Either #MeToo is a fraudulent, biased political weapon or it’s legitimate and honest and therefore women should retract support for Joe Biden.

The third option is you admit that accusers deserve due process before they get persecuted, not “all men” are bad and not all women are to be believed. We can still listen to and support victims, but until all the facts are revealed, it’s wrong to hang someone in the court of public opinion as “guilty” and destroy his life.

It might take a long time to heal the trust issues men now have with women due to the damage from weaponized #MeToo, but having an honest conversation is at least a step in the right direction.

This can be a teachable moment for leaders. You may still decide to support Joe Biden, but at the very least you should admit the truth to yourself and others who were actively participating in the persecution of Brett Kavanaugh. This is the moment of truth.

Previous articleComing our way soon?
Next articleSaving lives or costing them?