Minister Needs to pull his staff into line. 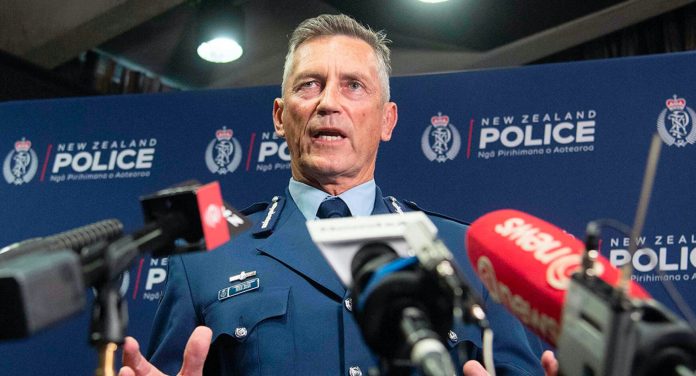 ‘Flippant’ Bush doing himself no favours

The flippant way Mike Bush responded to the epidemic response committee this morning highlights how vital it is police are held to account during the national emergency, writes Cat MacLennan

Outgoing Police Commissioner Mike Bush did himself no favours with his attitude when he appeared before Parliament’s Epidemic Response Committee this morning.

Bush bows out as commissioner at 11.59 tonight and it is a pity that he was so flippant in what was close to being his last public appearance on the job.

The Epidemic Response Committee, chaired by Opposition leader Simon Bridges, was set up to provide scrutiny of the Government’s actions and hold agencies to account for the way in which they exercise their far-reaching powers.

It is one of the few avenues for democratic oversight in Aotearoa at present and is accordingly extremely important.

Today, the committee examined how the police are interpreting and applying the emergency powers they have been given.

Professor John Hopkins of the University of Canterbury, a specialist in disaster law, is providing expert advice to the committee and set the scene by outlining the laws that give the police and other agencies the emergency powers they are using.

Hopkins highlighted a key concern of lawyers who are observing how events are unfolding during the lockdown: the wide discretion of police officers on the ground.

The pandemic has unfolded extremely quickly and so has the response. The emergency powers given to agencies are accordingly set out in acts. Acts contain the broad details of laws, but the specific rules as to how these laws will be applied in practice are usually set out in regulations.

Because we are in an emergency situation, there are no regulations spelling out this fine detail.

A couple of examples explain why this is important. Many New Zealanders have asked whether they can drive to the beach. Some people think that is all right. Others say it is not.

But where do Kiwis look for the definitive answer to that?

At present, we don’t know. Bridges asked Bush at the committee this morning whether it would be acceptable for Bridges to drive from his home in Tauranga to the beach at Mt Maunganui approximately 15 kilometres away.

Bush said it would not be all right, but could not spell out the exact legal basis for that view.

Seymour was doing exactly what the country wants and needs from the committee at this time: seeking to hold the police to account.

Similarly, here is an example from my own experience. I have rescued rabbits and guinea pigs. My niece and I have both found on trips to different supermarkets in recent days that there were almost no leafy green vegetables on sale.

Friends three suburbs away have a large garden with lots of fresh grass, puha, dandelions and kale. I wanted to go there to collect some – without having any contact with my friends or breaking social distancing. I also thought that it would be good to use my friends’ excess greens as this would mean I did not have to buy the very limited stocks available in supermarkets. That would mean more vegetables for others.

I made the trip to collect the greens from my friends yesterday, but was anxious throughout the drive there and back because I knew that if I was stopped by the police I would be facing the exercise of discretion. One police officer could think it was perfectly reasonable that I would be travelling out of my suburb to obtain greens for my animals. But another officer could regard this as totally unacceptable.

So, I got my friends to text me a photo of the greens I was going to collect, and I also had photos of empty supermarket vegie shelves so that I could back up what I was saying if stopped by the police.

As it happened, I travelled there and back to collect the greens without encountering any police officers.

But the point is this: in order for New Zealanders to abide by the strict lockdown, we need specific details of what is and is not acceptable for us to do. Otherwise we face uncertainty and also risk being stopped or sanctioned by the police when we are confused rather than disobedient. If that happens, compliance with the lockdown will be jeopardised because Kiwis will regard what is happening as unfair.

Hopkins made that point at the committee this morning and said that relying on discretion was not sustainable in the long term. He said that if police on the ground were acting on guidance issued by police headquarters, that guidance should be released publicly.

If there were currently no guidelines, guidelines needed to be prepared and should then be made available to everyone. Hopkins suggested a single place where both police applying the rules and the public complying with them should be able to access those guidelines.

Hopkins also said that the National State of Emergency should last for as short a time as possible and that regulations should be drafted to cover the situation in the coming months, when the public would still face some restrictions on their activities.

The most concerning part of the committee session was when ACT MP David Seymour asked Bush what the legal basis was for the commissioner’s statement that people could not leave their suburbs. Seymour referred to Bush’s earlier public comments that New Zealanders would initially see the “friendly” face of the police, but if they were non-compliant they “would be having a little trip to our place”.

Those comments are actually threatening – particularly for Māori and Pasifika communities who face over-policing on a daily basis during normal times.

Seymour rightly said Bush’s remarks were heavy-handed and also lacking in specificity. As such, they were not what the public needed from the police at this time.

What Kiwis require is clear and specific information about what we can and cannot do. And we also need to be very clear that this information is based on specific laws.

It was accordingly extremely disappointing that Bush replied to Seymour by thanking him for his advice and saying “I’ll certainly give it due consideration.” Those watching were left with the clear impression that Bush would give Seymour’s views no consideration at all.

In fact, Seymour was doing exactly what the country wants and needs from the committee at this time: seeking to hold the police to account.

Bush also refused to commit to releasing the guidelines under which the police are operating, but said he would seek advice about that from the Solicitor-General.

Bridges asked Bush to go away and obtain Crown Law advice on the legal basis for the actions which police are currently taking.

What is now required is for the police to release as speedily as possible all the guidelines and legal advice they have relating to their use of emergency powers.

We need to scrutinise this in fine detail, challenge it and be certain that every police officer in the country is acting according to the law.

It is to be hoped that new Police Commissioner Andrew Coster will reassure us that he has a better understanding than his outgoing boss of why this is important.

Who is the boss now? It appears Bush cannot let go. Cindy needs to get Nash, Bush and Coster together and sort out who is the boss.

Now Bush is no longer chief plod, who does he report to, Cindy?

Previous articleSTD’s More important than Covid19?
Next articleHave Your Say